Tom Hanks as Mr. Rogers; Elsa and friends in Frozen II and cops and robbers mayhem inside 21 Bridges 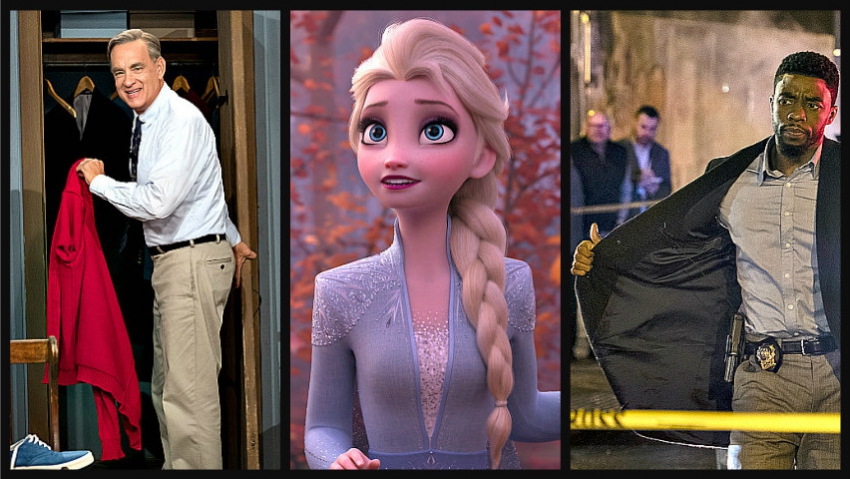 Two giants are available to you this week. There’s that “Hello neighbor” guy Mr. Rogers who many will remember watching as children and is now depicted for a more mature appreciation. And there’s a sequel to the biggest money-maker ever in animation. Not enough? There’s excessive gunplay, obsessive video taping and a film from almost every country in the European Union. Read on.

A Beautiful Day in the Neighborhood: 4 stars

A BEAUTIFUL DAY IN THE NEIGHBORHOOD: Perfect for this season coming up. Cynicism go away; here is warmth and kindness winning out over you. It’s a good message for children, but this film is not for the young ones. It’s for the ones who used to watch Mr. Rogers years ago on TV and need a reminder of the trusting attitude they saw then but which may have drifted away on them. Tom Hanks revives it for you. His portrayal of the beloved kids show host is excellent. He captures his essence without doing an imitation although he does talk slowly and gently and sort of looks like him. 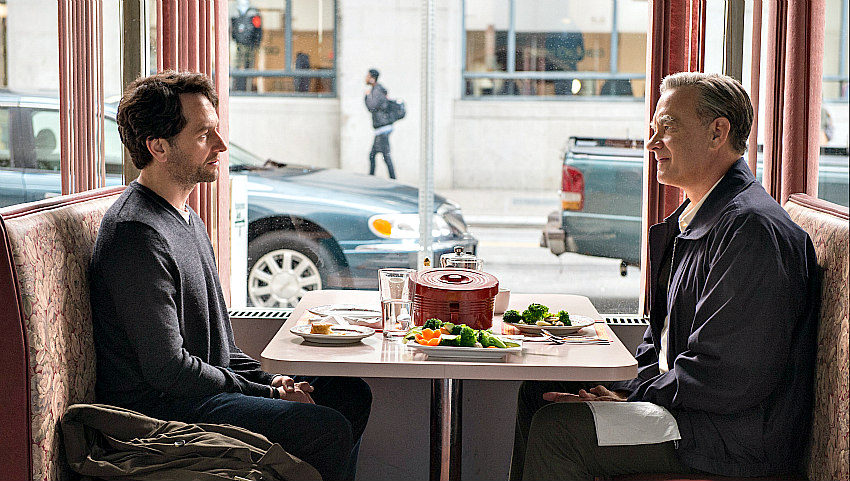 The film isn’t so much about him though, not like last year’s documentary Won’t You Be My Neighbor? It shows the effect he had on a cynic: magazine writer Tom Junod  (here named Lloyd Vogel and played by Matthew Rhys). Esquire assigned him to write a short profile; it turned into a full cover story and is the basis for this film. He was enchanted by the unapologetic goodness Rogers exuded and was moved to turn around the problems in his own life, particularly the cool relations with his father (Chris Cooper).  There are many studio scenes re-creating typical sequences from the TV show and several chats as the host and writer got to know each other.  A scene of children singing to them on the subway could have been hokey, but isn’t. Neither is the film. After the self-loathing of her last one, director Marielle Heller has made a fine feel-good movie. (5th Avenue, International Village, Marine Gateway and suburban theatres) 4 out of 5

FROZEN II: This is going to be a big hit. As big as the first? I don’t know but it’s now open in over 4,000 theatres—Cineplex International Village has it playing in three—and there’s enough in it to make it seem like a match for the original. The main characters are all back, there are lots of new ones, the animation is spectacular and the big power ballad this time, called “Into the Unknown,” is another  statement of self-determination by Elsa. First rule of sequels: don’t fool with what worked. Remember Frozen is the highest grossing animated film of all time.

But this film also different. Bigger and louder for one thing. Not so much a fairy tale but bloated up into a huge mythological epic. You’ve got rock monsters, ice statues, a magical water horse and questions both personal and mammoth that need to be answered. Elsa and Anna, as children in the early going, hear from their father about an enchanted forest up north where his people built a dam for the benefit of the nature-loving people who lived there. Elsa (voiced by Idina Menzel) feels if she goes there she may be able to find out the source of the powers she has. Her sister Anna (Kristen Bell), would-be suitor Kristoff  (Jonathan Groff) and comic snowman Olaf (Josh Gad) go too, and of course bring songs of their own. Some of them become huge, rousing numbers. But the plot sails even higher, into environmentalism and undoing injustice to indigenous people and learning family history. The story elements don’t all meld properly, they feel dreamt up in a blue-sky session, but there’s enough color, humor and fun to at least keep them pasted together.(Dunbar, International Village, Scotiabank, Marine Gateway and suburban theatres everywhere) 3 out of 5

21 BRIDGES: We get so many movies these days with action scenes that are so frantically played and edited that we can’t make out what’s going on. Here’s one that isn’t confusing like that. The various gun battles here are sleek and clear and effective. There’s a problem though. They keep coming. Too many of them. Eventually the effect dulls. At the same time, the story gets convoluted and almost indecipherable—something about corrupt cops—but exactly what isn’t clear. Plus an attempt to tie all this in to contemporary issues in the United States about cops vs blacks doesn’t work. It’s not told well.