Two sides of the American way: Man of Steel and Dirty Wars. Also, a Spanish Snow White and The East 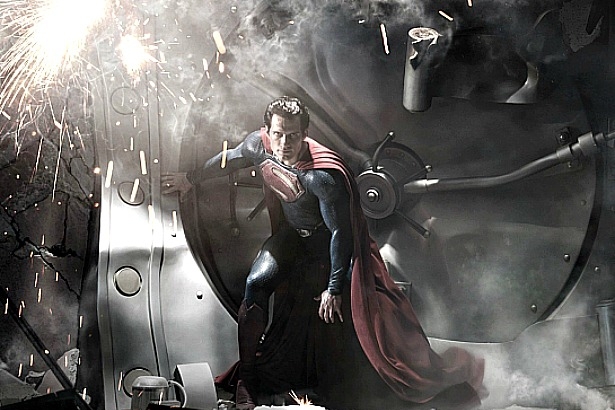 Superman is back with a new suit and a new attitude

Summer, comic book heroes; they go together in the movies. This week it’s Superman hoping to match all those Marvel comics characters and their box office. Seth Rogen, meanwhile, faces the apocalypse while anarchists, a secret paramilitary outfit and a bullfighting Snow White complete a pretty good line up.

MAN OF STEEL: Looking for a loud, crash-bang, building-toppling, effects-laden summer film? Here it is, with action scenes that, once they get going, refuse to stop until 143 minutes have been filled to excess. You get space ships crashing into high-rises, a planet splitting in two, even a plain old tornado. You get Superman raising a school bus out of a lake, rescuing Lois Lane in a glacier tunnel and going mano a mano with a vicious General Zod. It’s often thrilling, fascinating because it was mostly filmed here in B.C. (check out the Cassidy Pub) but also overpowering with earnestness.

This is Superman getting another reboot (seven years after the last one) with another recounting of his origin. The film starts with his birth, the first natural birth in centuries on the planet Krypton. Rebel leader Zod (Michael Shannon) calls it “heresy” and vows to kill the child.  The father (Russell Crowe) sends it by spaceship to our planet Earth where we pick up the story 33 years later. Clark Kent (played by Henry Cavill, a Brit best known for the TV series The Tudors) is anxious to know how he got here and through various flashbacks and dreams recalls struggling with his superpowers as a schoolboy and getting advice from the farmer who took him in (Kevin Costner) to keep them hidden. He can’t. Zod is still after him and Daily Planet reporter Lois Lane, played by Amy Adams, is on to his secret.

Also, his father, who must have died when Krypton exploded, appears to him now and then. That’s perplexing and yet this is a quite intelligent reworking of the story. Superman isn’t yet the crime fighter we know and Clark Kent hasn’t yet hired on at the Daily Planet. The rumored self-doubt angle isn’t really much developed and drama generally, even with these top actors, is second to the spectacle. And there are maybe three fragments of humor here. A film this relentless needs more. (Dunbar, Park, Scotiabank, Dolphin and many suburban theatres) 3 out of 5

THE IS THE END: Before you even consider the movie, look at this list of the people in it. Seth Rogen, Jay Baruchel, James Franco, Craig Robinson, Jonah Hill, Danny McBride, Emma Watson, Michael Cera, Jason Segel, Rihanna, Paul Rudd, David Krumholtz, and Christopher Mintz-Plasse. Do you recognize those names? Do you like their work? Not just James Franco and Harry Potter’s Emma Watson. All of them. How much you enjoy the movie depends very much on how familiar you are with them. They play themselves in the film and send up their images hilariously. Channing Tatum has an outrageously funny bit. Emma wields an axe.

Seth Rogen (and, Evan Goldberg, his writing partner since Point Grey High School) directed this piece of lunacy,  the closest I’ve seen yet to matching the inspired madness of English films like Shaun of the Dead.  They skewer these young celebrities for their pretensions and selfishness and keep you laughing as they do it. Careful: the humor is often juvenile and gets very vulgar very often. Rogen started as a comedy club performer, remember. 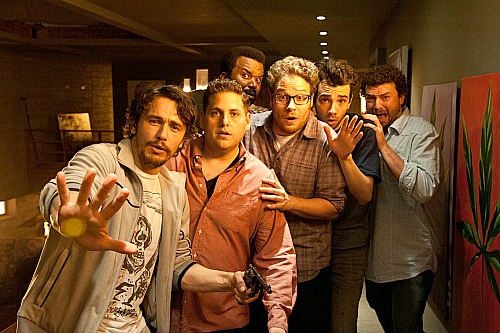 In the story Jay arrives from Montreal to visit Seth in L.A., goes with him to a party at James Franco’s house and as the evening progresses senses that the Apocalypse is starting up outside. The other guests are too stoned or drunk to notice, until many fall into a sink hole and only six remain. How do they deal with it? Infighting, rude jokes, wasting their meagre food and revealling their real selves, especially their inability to face a crisis. They make fun of each other’s movies and even film a short sequel to one.  There’s more but I won’t spoil it for you. The film is wild, exuberant and very funny ... if, you think it‘s for you.  (Scotiabank and suburban theatres)3 ½ out of 5

DIRTY WARS: Obama’s current political storm is over government surveillance. Last month it was the unmanned drone flights; he said he might be able to end them next year in Afghanistan. Well, here’s  another part of the war on terror exposed. It deserves big publicity and as explained in this documentary will get you angry. Also, and just as important, this is a model of investigative journalism.