VIFF picks: Amour, The Minister, No Job for a Woman and The Angels’ Share 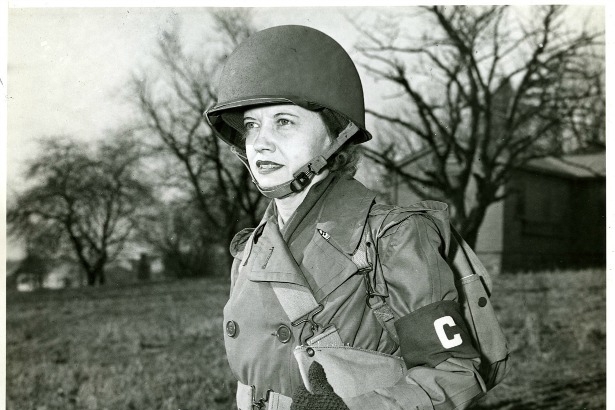 I’ve got three new VIFF recommendations today plus an expanded appreciation of Amour, now that I’ve seen it.

And watch for The Hunt to get another screening. Saturday’s was messed up because the subtitles were missing.

NO JOB FOR A WOMAN: Last year, it was jazz musicians. This year’s documentary about women in a man’s world is about “the women who fought to report WWII.” It’s a strange and stirring story and a fascinating film. Women were needed in the factories at home but not allowed at the front lines. That included journalists. This film is about three women who refused to accept that. 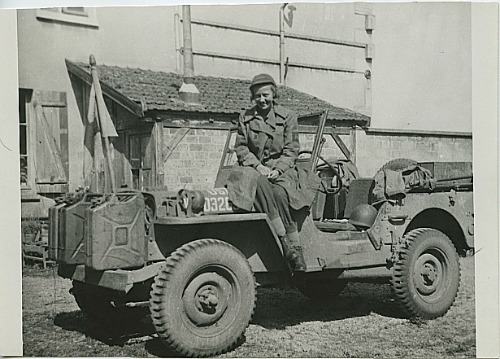 Ruth Cowan was a wire service reporter who, when she demanded an overseas assignment, was sent to North Africa to report on the “women’s angle” with the Women’s Army Corps.

Despite the name, they were mostly nurses, secretaries and support staff. Dickey Chapelle was to photograph training exercises and patients in field hospitals in the Pacific theatre but managed to talk her way to the front, notably on Iwo Jima.

Magazine writer Martha Gellhorn had the most compelling story. The “women’s angle” wasn't for her. She changed war reporting with stories about the “collateral damage,” how the war affected ordinary people. She was almost silenced by a remarkably mean-spirited maneuver by her husband, Ernest Hemingway. How she got to witness the D-Day landing firsthand is a great story in itself. The film tells many through archival pictures and film, narration by Julianna Margulies and the three women’s own words spoken by look-alikeactors. Screens Monday and Wednesday.

AMOUR: All the praise, the accolades and the awards are right. This is a remarkable film that will most likely move you deeply. Michael Haneke has made an intensely emotional film about a subject most of us don’t want to think about. Death, and the decline that comes on the way there.

The story involves a couple in their 80s, still in love and sharing a comfortable life. She suffers a sudden paralysis, probably a stroke. He resolves to take care of her but is pushed to the edge several times and feels helpless as she declines. Two French acting legends play the couple: Emmanuelle Riva, whose career dates back to Hiroshima Mon Amour and Jean-Louis Trintignant, best remembered for A Man and a Woman and Z. Haneke presents their situation with genteel restraint and absolute accuracy. Screens Monday and Friday.

THE MINISTER:  “Politics is a wound that never heals.” This incisive film from France proves how true that statement is through the shifting ideals of one man. Olivier Gourmet plays a Minister of Transport who seems steadfast in what he supports but time and again in the internal battles shows that he’s malleable. 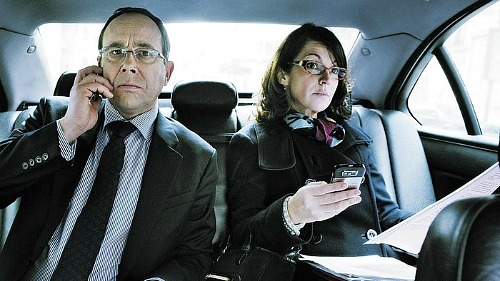 The film is ripe with astute comments about modern governments and politicians like him. Right off the top when he’s called to the scene of a mountain bus accident, he has to change his tie. The colour is wrong for the TV news clip.

When a colleague suggests privatizing train stations to help solve a budget problem, he says absolutely no. The people and the unions will be up in arms. The film shows him changing with the occasion and yet bemoaning that politicians are no longer respected. “Now they have to ask forgiveness,” he says.

The setting is France where the system that has both a president and a prime minister, a council of state and a national assembly may be a bit obscure to us. The issues and the behavior are familiar anywhere. This is a glossy, fast-moving and thoughtful film. It gets an added screening (its fourth) on Tuesday morning.

THE ANGELS’ SHARE: England’s Ken Loach is known for hard-hitting social dramas often about workers and/or poor people. So, a comedy and a heist film from him is a bit of a surprise. More surprising, it works. It’s funny and the caper section is tense. His characteristic side is there too. The story is about underclass urbanites in Scotland. Though they’re not challenging the system politically, they’re struggling to survive. 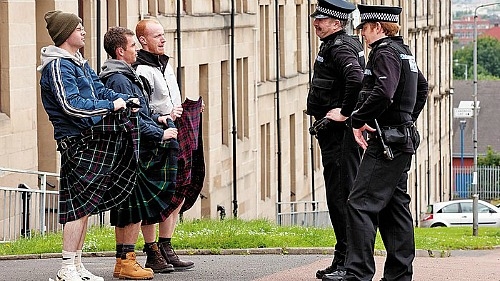 Britain’s Prime Minister has talked about the “gob” culture. These guys are close. The film starts in court where a young man (played, convincingly, by Paul Brannigan, a nonprofessional actor) is being sentenced for brawling. His lawyer claims he’s a changed man because he has a girlfriend and is about to become a father. He gets off lightly, just community service, which gives us several funny sequences with a group of unemplyed louts not quite working. Also three thugs attacking for payback.

The heist section is at a distillery where a little expensive whiskey can be drained from a barrel because allowance is made for evaporation. The film is too light to carry much social criticism, but it is entertaining. Those street-level Scottish accents could use subtitles. Screens Monday afternoon