VIFF picks: Fun with the Italian Mafia, tension with Ben the addict and what’s with this piece by Banksy?

Also some rule-breaking flamenco and two war stories from the Balkans, one by a Vancouverite.

The days are counting down at this year’s Vancouver International Film Festival. Several films that I’ve praised have another screening to come, including Blue Note, Winter Flies, The Oslo Diaries and What is Democracy?

And these, again with no ratings attached, are my latest recommendations:

The Man Who Stole Banksy:

The Museum of Forgotten Triumphs:

LOVE AND BULLETS: Of all the films I’ve seen at VIFF this year, this one has been the most fun. It’s improbable, silly, absurd, lovely, action-filled and a musical all at the same time. It’s from Italy where it got 15 nominations at the top movie awards (comparable to the Oscars) and won five, including best picture. It seems the Italians are more ready than the Americans to give rewards for just being good entertainment.

This one announces right at the start that it’s pure fantasy. There’s a funeral for a Mafia don, his widow emotes to the sky with her grief but inside the coffin, the corpse starts singing a song. He’s not the gangster boss, he sings, and yes, flashing back we do find out that this is a faked death engineered by the man’s movie obsessed wife who got the idea from a 007 film. The silliness keeps coming. A nurse stumbles on to the truth; two thugs are sent find her, but one, it turns out, was a childhood sweetheart to her and they run away together. Now others are on their trail which leads to the coast, a smuggler’s boat, his daughter at university in America and a lot of gunplay. Every once in a while there’s an original song, sometimes with a production number. The best of them is an exhilarating dance number in a hospital hallway to a cover version of the Flashdance song, with new lyrics. See? Absurd. But most enjoyable.  (Screens Thurs evening)

BEN IS BACK: Back from rehab that is, for a drug addiction. It’s Christmas Eve and only mom (Julia Roberts) is happy to see him.  His sister (Kathryn Newton) and his stepfather (Courtney B. Vance) are not. They’ve seen him backslide before. But mom’s love for her son (Lucas Hedges) can’t be snuffed out just that easily. Through this night she’s going to learn just how much she simply didn’t know about him and his life. Something like it happens to many parents, but with a drug abuser like Ben it can get extreme. This film  doesn’t go that deep; it tells an absorbing story that comes off somewhat on the safe side.

That may be because Lucas Hedges is a likeable actor (remember Manchester by the Sea, Lady Bird and others) and you don’t expect him to get really evil. His friends, maybe. The family house is broken into, the pet dog is gone and mom and son go out to find it. That takes the story to a grim neighborhood, a drug house and  an AA meeting. It’s a situation that not only reveals much to mom but also tests her ability maintain her love. Julia Roberts shines in the role as does Hedges. His dad Peter directed and I’ll do a fuller review when the film comes back for a regular engagement in a month and a half. Meanwhile, at VIFF, it screens Thurs night.

THE MAN WHO STOLE BANKSY: The phantom-like artist has just been in the news again so there might be an extra measure of interest in this film right now. Not that it needs any help because it’s a heady mix of several themes, chief among them the business side of art. A Palestinian taxi driver picked up on that when he spotted a mural by Banksy on a wall in Bethlehem. The artist had furtively painted it in 2007 on the barrier Israel had built to keep terrorists out. Walid Zawahrah knew it had value, chopped out a 4-ton section of it and put it up for sale. 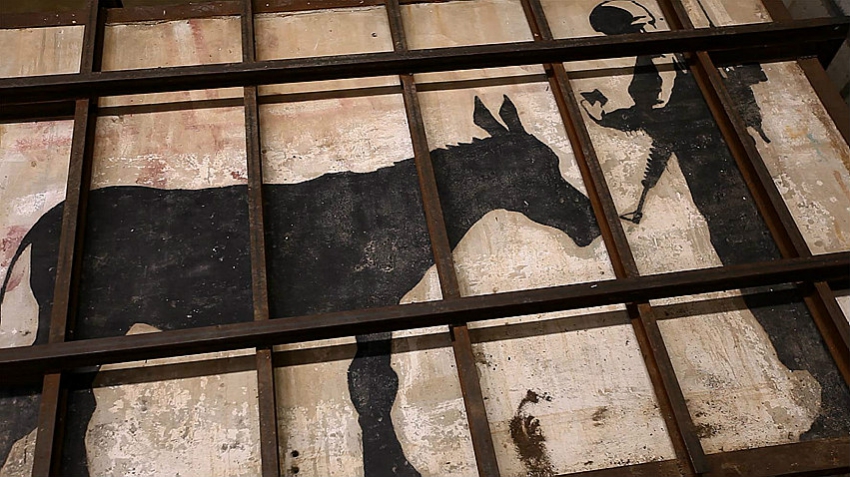