A whole mob of Avengers, a master horse handler and a look-ahead to DOXA and Harry Rankin

Two brothers Justin and Aaron (played by the two men who made the film, Justin Benson and Aaron Moorhead) are lured back to a commune in southern California they escaped from 10 years earlier. Aaron wants to go; Justin agrees to but just to be nice. They find old friends there who haven’t aged a bit, who still believe in a coming event they call “The Ascension” and deny Justin’s charge from a decade ago that they’re a death cult. The reality is more bizarre than that but it takes a while to be revealed. Maybe. Truth gets hazy, there are time loops, mysterious games, strange wildlife behaviors and something supernatural out beyond the trees. It’s a mind trip for people in the film and for us watching. It’s also well-crafted, wise about family bonds and showing a real familiarity with the tone and feel of these intentional communities. Fearful and exaggerated though. (VanCity Theatre) 3 ½ out of 5

EARTH: SEEN FROM THE HEART: It’s the time of year for environmental documentaries. You know, for Earth Day, Earth Month. This film from Quebec by Iolande Cadrin-Rossignol is one of the best I’ve seen. It’s got the dire facts you’d expect (58% decline in wildlife since 1970), grim scenes (hillsides shaved of trees, polar bears stuck on an ice floe) and assertions that we’re in a sixth extinction. The dinosaurs died out in the last one but this new one is coming on much, much faster. A number of scientists, writers and gardeners give us the information in English and subtitled French and like Al Gore did 12 years ago ask us to get involved and take action. 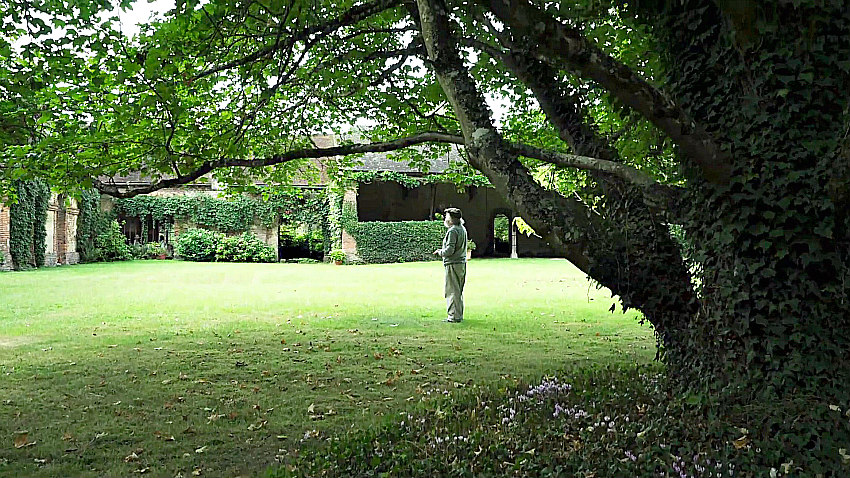 A fight to stop an oil port in Quebec should have particular resonance here in B.C. But what really attracted me to this film are (a) the cinematography and (b) the intellectual rigor. From luminescence to walruses up close to industrious ants, the pictures are beautiful. And the analysis is rich with philosophical insight. Some 12,000 years ago mankind started feeling superior to the natural world, second only to the gods, and Descartes perpetuated that vision. Less cerebral is the new research, that trees communicate with each other for instance. Too bad the film is showing only once around here: Sunday afternoon at The Park theatre, listed under its French title: La Terre Vu Du Coeur 4 ½ out of 5

CARAVAGGIO – THE SOUL AND THE BLOOD: Also here only briefly, but showing twice and at a few suburban theatres besides The Park, is this informative appreciation of one of the most unruly but innovative of the classical painters. Caravaggio was a carouser, a fighter, a man who always carried a sword. He was exiled from Rome after he killed a man. He was sued when he threw a plate of artichokes at another. He was described as “needy” but talked of a life-long search for “liberty”.

All this and more comes out in this film from Italy, directed by Jesus Garces Lambert, with the English actor Jason Flemyng reciting words that may be Caravaggio’s. Their origin is not made clear. What’s really at hand is a close look at his art, the chiaroscuro style of light and dark that he developed and that rivaled the popular styles in Italian art early in the 17th century. Many of his masterpieces are shown and several are examined in detail, for both their artistic status and how they fit into his tumultuous life. He seems to have had an exaggerated fear of beheading and painted several. In a David and Goliath painting his face is on the severed heard. He often brought in prostitutes to model for him, even for paintings of the Madonna. There’s lots missing too? Why did he get into fights repeatedly? Was he just a hot head or was he a target for homophobes. His sexual preference is well-known but only hinted at here. On his art though, the film is thorough and edifying. (May 2 and 13, The Park, Richmond, Langley and Coquitlam) 3 ½  out of 5