Widows of criminals doing it for themselves, the seed of modern politics and the perils of war reporting

We see Colvin reporting from Iraq, Libya, Afghanistan and other countries, counting down to Syria where she was killed during the siege of Homs in 2012. She did a live broadcast from there to Anderson Cooper at CNN. In many places earlier we had seen her dodging bullets and explosions, talking her way through checkpoints and interviewing terrified people hiding in shelters. That was her passion, documenting the horrors that ordinary people experience in wartime. “Quiet bravery” she called it but she was never sure whether reporting on it made any difference. Her editor (Tom Hollander) offered this: “You have a God-given talent to make people stop and care.” She won awards but also suffered post traumatic stress syndrome at times and self-medicated with alcohol. With both Jamie Dornan and Stanley Tucci as lovers, this is a pretty full portrait of a complex woman. Matthew Heineman, the director, uses his background in documentaries to very good effect. 4 out of 5

TRANSIT: Here’s a fresh and quite unusual look at the refugee and migrant crisis. It’s from Germany where its humanism may be more and more in need but is set in France. With an odd twist it recalls an earlier crisis to elucidate this new one. Christian Petzold, the German director whose last two films, Phoenix and Barbara, I also praised, took a novel about World War II, re-set it in modern times and allowed the contrast to speak to us. 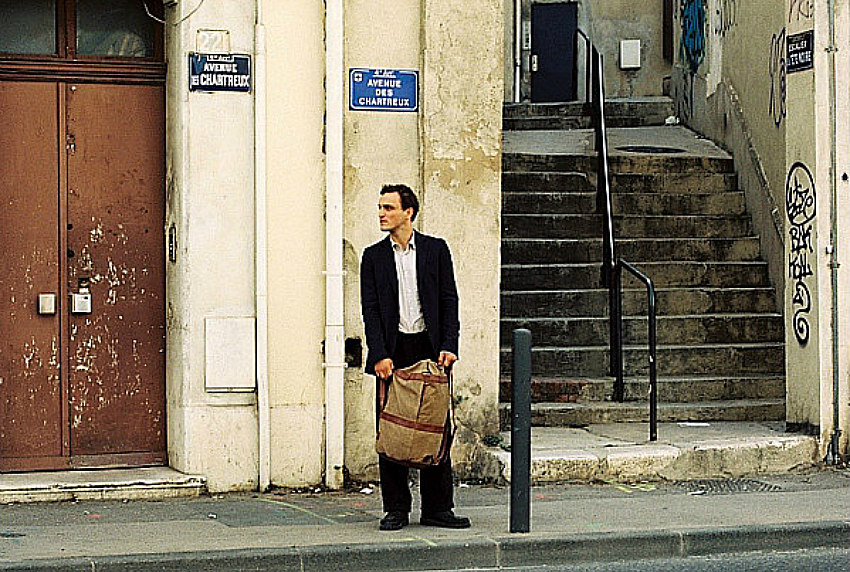 People are trying to escape from France ahead of a fascist invasion and “cleansing.” One man, played by Franz Rogowski, who looks a lot like Joaquin Phoenix, gets hold of a deceased writer’s transit papers and assumes his identity. The papers include an invitation to come to Mexico and that prompts him to travel south to Marseilles, deal with the consulate there and keep out of sight of the police as he waits for a ship. He befriends a boy and his mother and periodically crosses paths with a mysterious woman. A strong what’s-happening mystery rises and keeps you rapt. As he deals with bureaucrats and meets people referred to as “illegals,” he knows he’s powerless to help. But we’re compelled to think about what is and increasingly isn’t being done for them. This film is brilliantly acted and paced, eloquent and suspenseful. It was one of my favorites at the film festival. (VanCity Theatre) 4 ½ out of 5

SEARCHING FOR INGMAR BERGMAN: Cinephiles have been celebrating this year as Bergman’s 100th to recognize that he was born one century ago and that he became one of the most important filmmakers of all time. His legacy is so strong that it’s not surprising that two major biographical documentaries came out this year. Bergman-A Year in the Life played at the film festival. Searching … is a more personal appreciation by another filmmaker, Margarethe von Trotta who starts her examination on the same beach that Bergman had the knight and death playing chess. Then she explores his story with other directors like Olivier Assayas, actors like Liv Ullman (she’s in both documentaries) and members of his family.

Daniel, a director himself, describes a brittle relationship with his dad. He doesn’t miss him, he says. Ingmar, who echoed his own childhood in many of his films, was aloof from his own kids. There were many. Daniel describes a party they all came to. He had never seen most of them. Scenes like that add a lot to what we already of him and this film is a good companion piece to the other.  An actor calls him a “poor bastard because he brooded so much” and a producer says he “never thought he was good enough.” The film goes on to his tax exile from Sweden, his brief stay in America and his work in Germany. But along with all that, it passes on von Trotta’s deep love and respect for his work.(Cinematheque) 3 ½ out of 5

FANTASTIC BEASTS: THE CRIMES OF GRINDELWALD: Episode two in J.K. Rowling’s post-Harry Potter creation has more of the same, too much of it, according to Variety. Eddie Redmayne once again plays magizoologist Newt Scamander and he again has to battle the wizrd Grindelwald (Johnny Depp) who he captured in the previous film but has escaped with hopes of getting control over the world’s non-magical people. The chase leads to Paris where too many other characters, but too little actual magic, show up. That’s according to Variety again and with a running time of 2 ½ hours it could be true.

INSTANT FAMILY: Paramount Pictures recently had big hits with their Daddy’s Home movies (2015 and the sequel 2017). Now the writer/director of those two, Sean Anders, draws on his own experiences for a new family comedy timed to American Thanksgiving. He’s brought back the same star, Mark Wahlberg, to play the father opposite Rose Byrne as the mother. They adopt three children who prove to be wild and unmanageable. Whatever will happen here? Mark won’t put up with it surely.