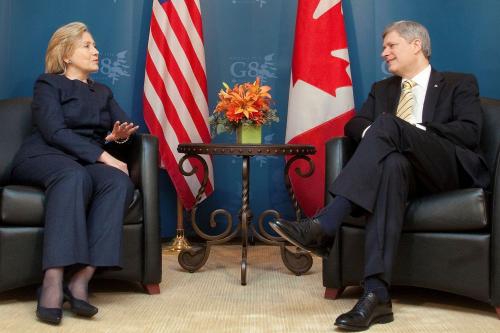 Prime Minister Stephen Harper and US Secretary of State Hillary Clinton pictured here before the G-8 Meeting in Gatineau, differ on abortion.

Contraception not a part of G8 maternal health program—say—the Conservatives. An astonishingly backward notion, indeed, but this is Prime Minister Stephen Harper’s starting-off point going in to the G8 summit, mouthed again as late as last week in the House of Commons, to the utter disgust of the Opposition.

Our country prepares to host the summit, only a month away.  A chilly political climate for the Summit it is—thanks to our prime minister, his mealy minister cohorts and their wilful interference with rational thinking. Hence, the ongoing struggle for a woman’s right to control her own body and her own fate; played out in Harper’s personal war—exemplified by him—forcing us to have Canada, represented as, and supposedly agreeing; to removing abortion funding resources, in any initiative that’s to be put forth at the G8. (Don’t think he’s stopped there.  Planned Parenthood and 11 women’s NGOs have had their funding cut.)

Embarrassment—that’s the general sentiment, says one spokesperson from the field:

“Around the world people ask development workers from Canada, ‘What has happened to Canada?’.  Our Canadian program is suffering under the Harper government. In the development world, we used to be leaders in areas such as gender equality, but we have been reduced to laughingstocks in some instances.”

Keith Martin, Liberal Member of Parliament for Esquimalt-Juan de Fuca, is not taking any of this lightly.  He’s a physician and a key mover behind The Maternal and Child Health Initiative to be discussed at the summit, and chaired the drafting committees at the 2008 and 2009 G8 International Parliamentarian’s Conferences in Tokyo and Rome, where a comprehensive plan of action to reduce maternal and infant mortality was introduced.

In a recent interview, he points out, “Prime Minister Harper has said he wants to adopt non-controversial measures, but has not missed an opportunity to talk about preventing women in developing countries from having access to the same abortion rights as Canadian women do: a bit rich given that Mr. Harper will never have to personally make such a decision.”

Martin echoes the opinion on the ground and says our PM is missing the mark on this one, “What Harper is doing is incredibly regressive. [Mystified], the other G8 leaders are scratching their heads: Why is Canada doing this?”

At the 2010 Pediatric Academic Societies' Annual Meeting, which is the largest gathering of pediatric researchers, audience response was shock-horror, said Martin, adding, “They can’t believe where Canada is going.” He, himself, is adamant that “Harper is off-track.  He’s putting Canada in a corner.”

And, Martin adds, “He is off-side with the other G8 leaders.”  Other member states’ support is with US Secretary of State Hillary Clinton’s unequivocal position—that, abortion funding must be part of any initiative serving women’s complete health needs, in an international, humanitarian-aid assisted-community context. What Clinton said, needed to be said: “She made a brave move."

It’s clear—one law for Canadian women and another law for recipients of humanitarian assistance, in Harper’s mind; women who can be forced to become mothers—should be.   If the Canadian Conservative’s position isn’t deliberately racist, at the very least it exposes people who are marginalized by race to mortal dangers which could easily be alleviated, preventing their deaths from unsafe abortion and pregnancy complications.

But Martin wants to take the conversation one step further—outlining specifically how primary healthcare to the disenfranchised should be made available through structures that already exist. These structures can be used to “sustainably provide access to the medical care that will reduce the unconscionable loss of life that occurs from entirely preventable or treatable causes in the developing world”, if only political will is exercised for real action this time at the June summit.

It would look like this (according to him): A partnership between G8 nations and the World Food Program (WFP).

“Those who live in these regions of acute and chronic food insecurity also suffer from some of the highest rates of mortality and morbidity from the world’s major killers: diarrhea, pneumonia, malaria, tuberculosis, HIV/AIDS, and of course malnutrition. The reason for this is that a profound lack of access to basic medical care often goes hand in hand with areas that have poor food production.”