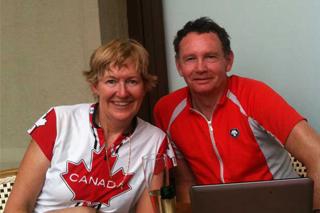 I've had a fabulous summer break, and Vancouver politics have cooked along without me...and there's been plenty of cooking going on. Here's some of the news:

Olin and I cycled every inch of the way (about 1400 kms) from Paris to Prague in August, mostly following a route called the Paneuropa Radweg. We visited tiny hamlets and major centres. We ate French, German, and Czech food, looked at cycling lanes, admired clean energy farms, and appreciated the public spaces and historic buildings everywhere we went. The commitment to cultural heritage is remarkable. Every single town that we were in had a public street area primarily for people. Cars might be permitted, but pedestrians rule. The cafes sit in the streets and the town sits in the cafes. In one town, a children's art class was lying more or less in the middle of the road. That small town had 16 restaurants and about 500 outdoor seats in a small public square.

On the hot-button issue of cycling lanes, there is no formula. We have seen everything you could imagine - some fabulous, some terrible, and some not at all. Street rights of way for the main streets are often much wider than in Vancouver, and can be wide enough for a tram, bike lanes and regular vehicle traffic. Lots of cycling on sidewalks, surprisingly.

Every town of any size had a tram and I have geeky tram video from every one of them.