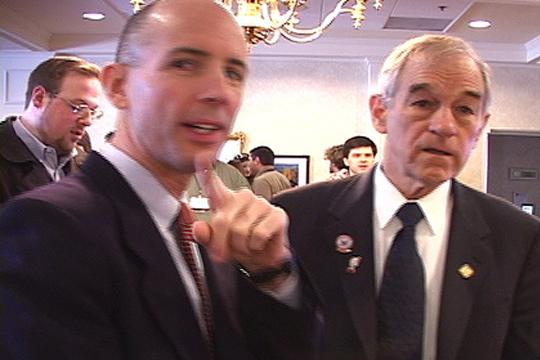 Ron Paul sent a chilling message at the GOP debate on Tuesday: if you're sick and dying and uninsured, that's your problem.

CNN anchor Wolf Blitzer asked Paul, a darling of the Tea Party and libertarian right, what should be done if a young man without health insurance became suddenly sick.

"Who's going to pay if he goes into a coma, for example?" Blitzer asked.

After explaining that government would step in under a socialist or communist regime, Paul elaborated:

"That's what freedom is all about: taking your own risks --" before being cut off by loud cheers by Tea Party supporters.

When Blitzer asked if this meant that uninsured sick people should be left to die, Paul disagreed, amid loud cries of "yeah" from the audience.  But he emphasized it isn't up to the state to care for the ill who can't pay. At the time that Paul was practicing, he said, churches and hospitals would own up and take care of vulnerable members of the community who couldn't pay on their own. "We never turned anybody away from the hospital," Paul said, speaking of his medical practice in the 1960s prior to Medicaid. "We’ve given up on this whole concept that we might take care of ourselves and assume responsibility for ourselves, our neighbors, our friends, our churches would do it."

Paul's own campaign manager, Kent Snyder, died of pneumonia back in 2008, according to Gawker. Despite having helped boost Paul from a relative unknown to a very popular candidate among self-proclaimed leftists as well as Conservative supporters, Snyder's mother couldn't pay off the medical bills and he died at the age of 49.

Does that mean that Ron Paul, a former medical doctor, couldn't see his own campaign manager's illness? Or that he couldn't pitch in to help pay Snyder's $400,000 medical bill? Paul's website issued a brief note addressing the passing of his campaign manager, saying that Snyder had "sacrificed much for the cause of liberty". Friends of Snyder organized fundraising efforts to help his surviving family pay the bill (the effort has so far raised $34,870, or eight per cent), but according to Paul's logic, this process should have been happening during Snyder's illness.

Paul, who garnered considerable support from youth in 2008 for his staunch opposition to the Iraq war and firm grasp on U.S. history, prompted shock for his recent comments. The New York Daily News ran a story on Paul suggesting that he and Texas governor Rick Perry were "celebrating the culture of death" at the GOP debates.

Campaign managers, who often go under the radar in politics, will get the spotlight in the new George Clooney movie, The Ides of March. As the loyalty of campaign managers goes under scrutiny on screen, Paul's recent response suggests that politicians can sometimes appear to be disloyal to their supporters as well.

For more context about the death of Kent Snyder, see this article.