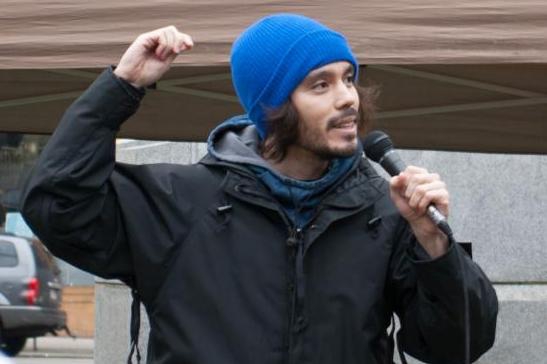 At the robo-call protest in Victory Square yesterday, one of the highlights was a speech by local comedian and activist Sean Devlin, whose biting sense of humour was mixed with powerful historic examples to show why Canadians need to demand accountability for the alleged fraud that took place in the 2011 elections. As the creative director of Truthfool Communications, Devlin is a co-creator of the Sh*t Harper Did website, which was widely credited for igniting youth interest in federal politics.

Below are excerpts from his speech, "Canada's Math Problems":

I'd like to speak to you about Canada's serious math problems.

First of all, the Harper Conservatives were elected to a majority government with less than 40 per cent of the votes. That's four in 10. Mathematically speaking, four in 10 is not the majority of numbers between one and 10. In fact, four out of 10 happens to be a failing grade on a math test. It's also a losing -- and I repeat losing -- road trip for a hockey team. But perhaps most importantly, four in 10 isn't even enough dentists to credibly recommend you a tube of toothpaste.

If four in 10 isn't good enough for toothpaste, should it be good enough to run our country?

What I'm saying is that before this robo-fraud information came out, we already knew the Harper majority was a fake majority. Now we know it's a stolen fake majority. And really, who steals a fake? That's the work of an incompetent art thief at best. It's the pathetic action of people desperate for power.

I also think some of the responses to this scandal have been pathetic. For instance, there are some conservatives in the media asking,"What impact did this fraud really have on the election?" They don't seem to understand what has happened here.

In 1988, Canadian Olympic sprinter Ben Johnson won a gold medal and then tested positive for steroids. They didn't try to determine how much of his muscle was the result of steroid use. No. They took his gold medal away. Because he cheated. He violated the established trust.

This government has, without a doubt, lost the trust of the people it claims to represent. That's tragic because given the scale of the problems we face as a nation, as a world -- trust is perhaps the most precious commodity we have. Without it, we are lost.

And how have the Harper Conservatives reacted to this? They've responded by saying: "Well, you need to prove that we aren't trustworthy."

They also don't get it. When you lose trust, you don't get it back because someone can't prove that you aren't worthy of it.

Trust must be earned. Right now, the only way for the Harper Conservatives to earn our trust is to commit to an open and accountable public inquiry to truly get to the bottom of this. You can support that call, along with nearly 40,000 other Canadians at Leadnow.ca.

We need a public inquiry because in all honesty, we don't have much reason to trust Elections Canada. The Harper Conservatives broke the law during the election that brought them to power in 2006. They cheated by breaking spending limits by over a million dollars. After five years of Election Canada investigating and court delays, what happened?

All charges were dropped and the Harper Conservatives paid a $50,000 fine.

That's not a punishment. That's a crappy tip at a restaurant. That's the Conservatives saying: "Hey, we really appreciate how gracious you've been in allowing us to break the law, here's a little something for your trouble."

This is nothing new. If you look at history, crooked politicians are almost never brought to justice by the courts. They're brought to justice by the people. In my mother's land, the Philippines, we've had to deal with serious national electoral fraud numerous times in the last 30 years. In 1986, it took millions of people in the streets to overturn rigged elections. In 2000 they did it again. Then the next time fraud was committed, the people of the Philippines had created a greater culture of accountability and that president was arrested.

That was the result of millions of people peacefully resisting criminality as a status quo. So while I am inspired by how many of you turned out today, I'm going to be honest, we need more of you. And we need more from you.

I'd like to pitch you an idea. In the early 1900's, when the suffragettes were fighting for women's right to vote, they had one tactic that seems relevant to our situation. It was the First World War and for more than two years, over a thousand women took turns silently standing outside the White House. They haunted the president with a few messages, the shortest of which was this: "Democracy starts at home."

Look to Vancouver South, to North Vancouver and to other ridings where these electoral crimes have been committed. These are crime scenes and there are politicians there who have cheated their way into power. Maybe we should be haunting them?

(Eruption of cheers from audience)

I hope to see you there. Thank you.