U2 Concert Delivers Inspiration, Illumination, and Brings Together 50,000 Voices at BC Place 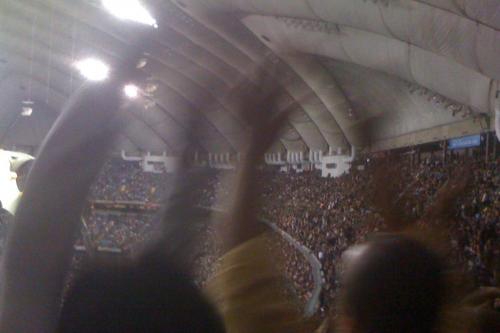 Inspirational, hypnotic.  The U2 concert was like being in the middle of audial fireworks.

With an opening act as fantastic as Black Eyed Peas, how sad that the sound system wrecked the quality of the voices---a rib-busting bass annihilated the melody--- but even so, it couldn't destroy the excitement of the performance last night at BC Place.  The deafening volume and lack of tonal clarity did make it more difficult to enjoy the first act.

But by the time Black Eyed Peas sang their last number, "I Gotta Feeling,"  they'd ignited the crowd  of 55,000 and then came on with the chorus: "that tonight's gonna be a good night" and emotional wildfire broke out.

Tonight was clearly the night, and thousands gave it up, dancing and singing and following that up with thunderous applause.

"Ground control to Major Tom" signaled the end of the intermission and the virtual carpet rolled out to greet U2.  Waves of raised arms rippled around the oblong-shaped stadium as anticipation of U2's arrival built.

Spot lights shot up from all sides of the stadium, transforming it into an altered world, and in that altered atmosphere, U2 hit the stage like bolts of lightening and didn't stop electrifying the audience until they'd delivered on many favourite numbers, thanked human rights leaders for working for a peaceful world, asked people to consider HIV initiatives, sang happy birthday to Bill Gates, who was in the crowd, noted the work of the Bill and Linda Gates Foundation, and performed not one, but three incredible encores.  And by then, the sound system had definitely improved.

The video stream above the band was at times transfixing, at times hypnotic, and at other times, simply stunning, streaming images of Aung San Suu Kyi, Nelson Mandela, the earth as seen from space, and beautiful photographs of African orphans.  The energy built with each song and when Bono sang End of the World, beams of white light kept the beat, drops of white light danced across the roof and synchronized movement with the music.  Sunday Bloody Sunday followed and Bono turned the mike out to the crowd and allowed more than 55,000 to join voices in song.  The mass karaoke was beautiful.

The crowd screamed  U2  back onto the stage for the first encore,and preceding their return,   Archbishop Desmond Tutu appeared on the video stream framed in a bright red background. The inspiring leader delivered a speech in which he said, "We are the same person." If U2 aimed to unite, they accomplished it here.

The song One followed Tutu's moving words and  U2  again invited 55,000 voices to join in song.  "One love, one blood, one life here get to do what you should. One life with each other.  My sister, my brother..." It felt like a human fireworks display. It felt like the music was exploding beauty and power.

Bono invited the audience to hold up their cell phones, "like a galaxy."  The lights went off.  The music continued. Out of darkness, thousands of lights.  "Love is a temple.  Love a higher God," Bono sang.

It was natural ecstasy. Pure, if not free, and well worth the price.