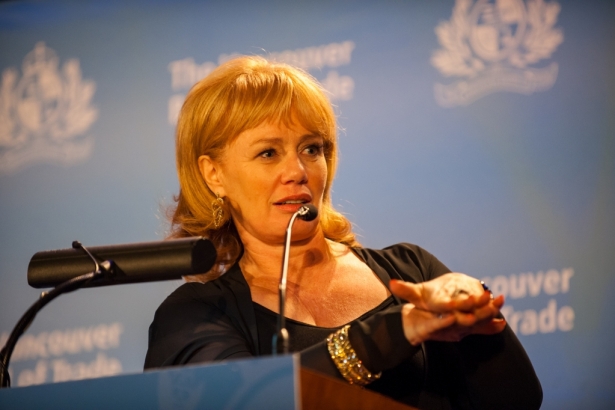 Two guys with a candy company called OMG's stand nervously pitching their product. Kevin O'Leary ridicules their valuation, and the other guys on the Dragons' Den scoff and bow out. None will put money behind the venture, not even knowing that the two operated and sold a successful company a few years back. The camera pans in on Arlene Dickinson, the only woman on the show and a marketer with cred and clout. O'Leary pokes fun at her tendency to sit back, listen and deliberate while she does exactly that.

It's a fraction of what they're after. But within minutes, they agree that Arlene Dickinson is the perfect partner and she's got half the company.

The three hundred business people and students watching the video at the Board of Trade lunch at the Four Seasons Hotel in Vancouver last week are laughing, and there's the feeling that as rough and tumble as the other dragons are, Dickinson trumps them all.  The talk was sponsored by Scotiabank.

Earlier, I had the opportunity to meet Dickinson and she was as compelling off-stage as on CBC's most popular reality TV show.  When I told her I what I do for a living, she leaned in,  asked how it was going and when I said I'd love to come on the Dragons' Den but I'm way too scared to, she laughed and said, "Don't be."

Now Dickinson takes the stage and explains that the company has been a huge success and that her investments have accrued more value over the course of Dragon's Den than any of the guys have.

At a table with a placard that reads: "Women's Leadership", entrepreneurs exchange glances. Many of the women at the table struggled to build their own successful enterprises and their admiration for the lone female Dragon on the stage is palpable.

As scary as she might seem on the show, in a real life encounter, Dickinson couldn't be warmer, or more encouraging, one of the women notes, having had a moment with her at a VIP reception before the lunch. Dickinson's best-selling book, "Persuasion: A new approach to changing minds" sits on the table, signed by the author with a dedication. "You need to know how to persuade others..." the back cover reads.

Arlene Dickinson traveled an improbable path to both power and persuasion. Divorce, single motherhood, and a host of other challenges overcome make her a poster girl for the notion that necessity is the mother of invention.

As a young woman, Dickinson said she had only one goal in life and that was to "be a mom."

At 19, she got married. Six pregnancies and two miscarriages followed, leaving her and her husband "really broke." They built their own home. She functioned as the contractor while her husband was doing menial work.

"I'm really bad at relationships, I'll admit it right now," Dickinson said, foreshadowing the break-up of the marriage, which was yet to come.

Her husband asked her to send him through school and she thought it was the right thing to do.  So, she started a home business doing bill collection. She described standing in the kitchen on a princess phone attached to the wall, four children crying, and being grateful the chord was long enough to stretch into the living room so the people she was calling took her seriously.  Chasing people down to pay their bills taught Dickinson about others, and herself.  She encountered people whose goal was never to pay their bills, while others, she talked with clearly had run into trouble, and were trying their best to take care of their families.

They had gotten into a bad place, and Dickinson could relate. At the same time people were calling her to try to get her to pay her bills.  It made her never want to be without money again.

In the midst of a messy divorce, and faced with losing custody of her children if she didn't get a job, Dickinson got a position by saying she would work for free. Faced with losing her children, if she couldn't show that she had income, she said she used all her inner resources to make the company successful.

That was then and this is now and Dickinson is no longer struggling.  But she understands people who are.

And she wishes Canada would get behind its entrepreneurs.

"Canada is a country where when you are a little bit successful, people wait for you to fail," she said, adding, "We need to celebrate entrepreneurs more. The entrepreneurial economy will be the most important part of the future economy.  Entrepreneurs move quickly and are disruptors.

"We need more people to tell their stories. It's okay to fail. Failure is how we learn our lessons."

She urges her audience to invest in entrepreneurial ventures.

"I think you should get a plaque from the government if you stay in business for more than two years," she said.

She thanks her sponsor, Scotiabank, for being willing to engage in conversations like the one that has just happened over lunch at the Board of Trade. Then she stands and accepts rousing applause. She's been nothing if not persuasive.

A few days later -- well, today, actually --  I get a press release which says that on Saturday, March 2, 2013 The Dragons' Den will be in town looking for the "next big thing" for the hit series on CBC Television. The press release reads:

DRAGONS’ DEN gives aspiring entrepreneurs the opportunity to pitch their businesses to a panel of wealthy Canadian business moguls - the Dragons.   Successful pitchers will have a chance to earn real investment - from the Dragons’ own pockets!

This is a fantastic opportunity for entrepreneurs and small business owners to come down and pitch their business concept for the chance to appear on national television. We would love to see as many people audition as we can!

And I think, hmmm... What was that she said?

The Dragons Den's Arlene Dickinson with Vancouver Observer Founder and Publisher, Linda Solomon in a photo by Tyson Jerry(Dziedzic) 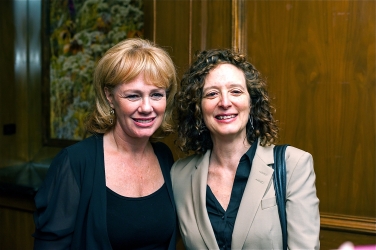 Vancouver's Board of Trade Co. brings high-end fashion to Chinatown

The specter of Vancouver real estate downturn: a lonely realtor and an open house where nobody came