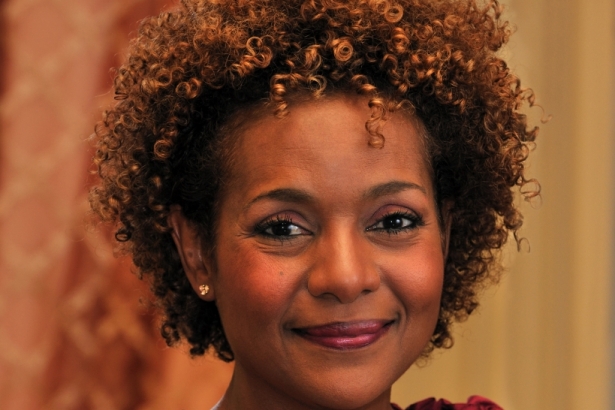 Michaëlle Jean isn't willing to reveal the juicy details about what went on behind the scenes at that pivotal point in Canadian history "on the day the Prime Minister came to me to ask for my signature on his request for Parliament to be prorogued."

During her talk at the UBC Chan Centre for the Performing Arts last night, Jean held back by dropping only a few crumbs of intrigue and the possible hint of a future tell-all book -- but only after Stephen Harper is no longer PM.

"I don't think it would be appropriate to share while the Prime Minister is still in power," she said, ever the diplomat, adding: "The decision you make as Governor General has to be made in the interests of the country.  You have to leave politics aside and think of Canadians."

While that was undoubtedly one of the most dramatic moments of her career -- one which pushed Canada to the verge of a crisis -- Jean said she "walked on a thin line" during her whole tenure as Governor General.

The beautiful, stylish, charismatic, brainy and happily married 55-year-old former Governor General of Canada delighted students with an idealistic talk about transformative leadership, remarkably stateswomanlike.  She left the impression that she would mount a formidable opposition challenge to Stephen Harper, if the Liberals sought to wrest away power through a "draft Michaëlle" campaign.

During her speech, the former CBC television journalist and Italian studies professor dropped hints at her philosophical differences with the Conservative government by quoting a few gems:

"Having lived under a regime that tried to break the bonds between us, I recognize the need to collaborate," she said.

Jean grew up in  Papa Doc's Haiti and her first-hand experience of political oppression gives her an authority that many other Canadian leaders lack.  When she speaks to the importance of protecting Canada's democratic and humanistic values, her words resonate with visceral force.

As a child, she saw her father Roger taken away and tortured by authorities, never to be the same man again.

She was shaped by suffering, but viewed it from within a family full of affection.

"At a very young age, I learned it was possible to terrorize an entire people," she said. "As a family, we had a distaste for oppression.  I learned that indifference to the suffering of others is not possible…  I developed the strength to endure hardship."

When the family finally fled, they arrived in Canada "in the thick of the night" and began an experience of "rupture."

"The only thing we could bring with us is what we had in our heads," she recalled. And when she moved to Quebec in 1968 to start life anew with her family, it was the beginning of her lifelong love for Canada and its values.

"We discovered a country where people are compassionate and the rupture became a blessing," she remembered.

In Jean's own inspiring journey, she went from a refugee child living with her family in a one room apartment to "being invited to an undisclosed location" in the world to discuss issues of the highest importance to Canada.

She recalled looking silently into the eyes of then Prime Minister Paul Martin after he told her that he wanted her to become the Governor General of Canada.

"It was not the association with royalty or the glamour that forced [me] to stop and think," she said, "but whether I could make the institution relevant…"

A self-described "woman of action", Jean went on to lead a career of being  Governor General that people would remember years to come as a representative who embodied the best of Canada's qualities on the world stage.

Now that Jean has left her position as Right Honourable, she intends to make concrete her belief that "quality education should be available to everyone."  This animates her desire to rebuild educational system of Haiti.
Her goal of "bringing all on a solid ground of peace and prosperity" and of inclusiveness and collaboration suggests a different Canada than today's, a country to which Canada many look forward if Stephen Harper's grip can be loosened in 2013.

For now, the Canadian icon has put her credentials and experience to work for Fondation Michaëlle Jean, an organization to promote social change for youth, and continues to push for humanitarian efforts in Haiti.

With her wealth of experience both on the world stage and in Canada, Jean would make a great Prime Minister if she ever took the chance to run for the top spot.

For as she told the audience last night, throughout her career:

Murdered by America: "Girl With the Dragon Tattoo"