Aaron Sorkin's The Newsroom on HBO imperfect but powerful TV 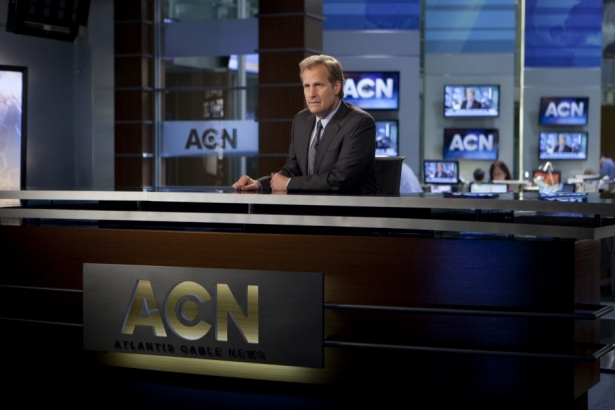 So far, Aaron Sorkin’s ambitious new HBO drama, The Newsroom, has received its fair share of mixed reviews. Critics and audiences alike have found the show preachy. The characters are mostly familiar, well-worn tropes of the Sorkinverse. There are even complaints that some of Sorkin’s sparkling dialogue just amounts to him showing off his intellect through the voices of his characters. If you are watching The Newsroom, chances are that all of these complaints make sense. I too understand these complaints. Some of them, however, are definitely unfair.

The show revolves around a fictional prime time news program on a fictional network, the star of which is anchorman Will MacAvoy (Jeff Daniels). His new Executive Producer is McKenzie McHale (Emily Mortimer), MacAvoy’s long-ago ex-girlfriend and reportedly the best damned EP in the business. When much of MacAvoy’s staff jumps to the new ten o’clock show, McHale comes in and brings several of her own people along for the ride.

After a very frosty start, the two settle in, having bonded over breaking the BP oil spill story of 2010. Oh, did I mention that the show is set roughly two and a half years in the past?

This is important. In fact, it may be the most interesting structural feature of the show, but more on that later. MacAvoy and McHale develop a working relationship which is tense and productive. The two set about making a show which eschews modern journalistic sensationalism and promises an unwavering revival of good, old-fashioned, hard-hitting, content-driven news casting.

This is the heart of the show’s premise, that a healthy democracy requires a well-informed, rationally-minded electorate. Fostering this, we are told, is the real job of the media. And frankly, I think that is exactly right. In fact, the premise hearkens back to debates within the field of democratic theory going back almost 100 years.

Luminaries like John Dewey and Walter Lippmann have been arguing forcefully about the relationship between education, the public’s ability to grasp information relevant to its interests, and the health of a democracy at least since Dewey and Lippmann. In fact, it touches on themes within political theory going back centuries.

If American democracy is one of that nation’s most cherished institutions (it is), then The Newsroom attempts an experiment on the heart of America, a nation bitterly divided over its politics and in the ebb of its global dominance.

This is why the show comes across as preachy. Sorkin insists that he is attempting something “optimistic” and it is hard to see how he could attempt something like that without saying what’s wrong and how it could be better. In that sense, the preachiness complaint is unfair. Sorkin is not trying to say what we should believe as much as he is saying how much more the media could be doing to serve its audience and how corporate concerns stand to undermine that service and hence the integrity of American democracy as a whole. There is no way to explore this theme without a whiff of sermonizing.

Now, back to the setting. It’s important to see how setting The Newsroom in the near past serves its ends. Events that took place just over two years ago are far enough away that they are most certainly in the past (as opposed to ongoing) and that we have a certain perspective on their significance.

However, they remain near enough to our lives that we might easily still be dealing with their implications and that they remain fresh in our minds. So to set The Newsroom in that intellectual space is to construct a ‘what-if’ scenario which takes on a unique level of poignance. We can think back to the events of the last couple of years and ask ourselves ‘what if there was a Will MacAvoy covering this story?’

Structurally, this is a clever trick. Notice how Sorkin can fictionalize on actual events in a way which raises questions, not about the events themselves, but about the way we come to understand and know about them. He can skip over a wide range of details as he is able to assume a certain level of familiarity in his audience. That is basically why I think that the setting, the near past, is likely the most interesting structural element of this show.

That said, many of the critiques are actually quite fair. For example, story is not Sorkin’s strength, and it shows. He delivers 50 minutes of HBO-calibre drama capped with an often trite network-calibre ending. It can also be hard to read the character dynamics because they seem to vary from episode to episode.

Do these people genuinely like or merely tolerate each another? Sure, we want dynamic characters which we can follow as they evolve. However, if they’re too dynamic, we lose grip on who they are. What’s more, some relationships need to remain fairly static. It helps the viewer to orient herself within the fictional space and, honestly, it’s more believable.

I hope that The Newsroom works out its kinks by season two, which is on its way because it has already been renewed. Sorkin fired most of his writing staff for the second season, so we’ll see how that goes. In the meantime,  try to hold your nose over some of the apparent pontification. When you do, the greater themes start to emerge, and they are well worth the effort.

HBO's The Newsroom sputters at the start, but looks promising