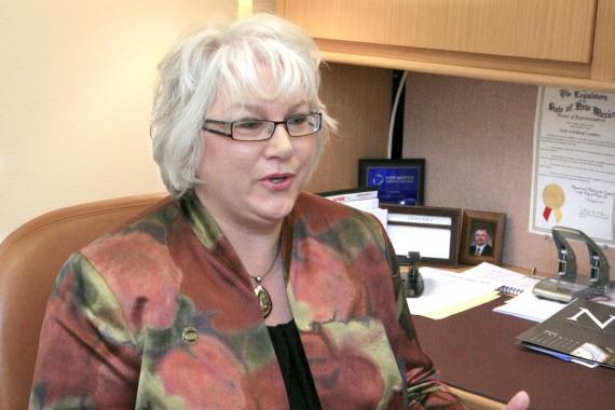 Cathrynn Brown has been on the defensive since drafting House Bill 206. Brown is seen here wearing a blazer made from recycled hotel curtains.

Well, folks, it is officially heating up. And I’m not referring to this non-event of a winter we’ve had. The race for dumbest jerk on the planet is in full swing, with Republicans and the Iranian government going toe-to-toe in the past couple of weeks.

Abortion: again, for some reason

On January 23rd, A Republican State Senator in New Mexico named Cathrynn Brown introduced House Bill 206. If passed, it would have criminalized abortion by rape victims. Brown, in a flash of epic dullness, sought to classify the act as destroying evidence, and thus was born the dumbest piece of legislation in history.

There are so many angles of stupidity about this thing that it is hard to know where to begin. First of all, because the situation isn’t traumatic enough in the first place, let’s make sure she faces jail time. Also, let’s jail anyone with the audacity to help her do it.

Then there’s the whole worst-reason-ever-to-have-a-kid angle. The child would literally be born for the purpose of sending its father to jail. I’d like you to meet my son, Exhibit A.

Also, if her intention was, as she insists, to target rapists who coerce victims into abortions, isn't that already a kind of assault?

But most of all, it has become painfully clear that the American public is not interested in the abortion debate right now. Most would rather talk about the sagging economy and climate change, neither of which is improved by banning abortion. Just when you thought that the Republicans had eviscerated themselves completely on this point, along comes Cathrynn Brown.

The amazing thing is that she’s not alone, either. For example, Matt Windschitl, a Republican State Representative from Iowa, wants to ban all public funding for abortions. Last year, Iowa spent $20,000 on 22 abortions, 15 due to severe anomalies like the foetus’ brain being separated from its head, five to save the woman’s life and a whopping two due to rape.

Since I’m pretty sure that having your brain outside your head is fatal, it seems safe to say that none of those babies would have survived.

So, doing the math, and assuming that the various prognoses were accurate, banning these 22 abortions would have resulted in five dead moms and two living babies for a total of minus-three people. That, apparently, is worth saving $20k, or $6,667 per dead person, rounding up. Great Pro-Life-ing there Iowa.

Pissing off PETA with monkeys in space

Question: how do you upset PETA, compound international tension over your nuclear program, spawn a whole new conspiracy theory, and still come off looking like an asshole while out-crazying the Republicans?

Well, not to be outdone, on January 28th the Iranian Space Agency launched a rocket into space containing an absolutely horrified monkey.

This officially brings Iran’s space program within about 60 years of the modern world. Upon its successful return, the Iranian President is said to have celebrated by listening to his new Buddy Holly record, going for a drive in his Studebaker, and enjoying a malted at the soda shop with his sweetie.

This builds on the nation’s already proud history of space exploration. On February 3rd, 2010, the ISA bravely launched a rocket containing a rat, two turtles, and some worms, finally completing the joke which begins “A rat, two turtles, and a family of worms walk into a travel agency...”

Since news broke of the launch and the first wave of jokes began to peter out, speculation has run rampant over the alleged survival of this poor little primate. Pictures of the monkey before and after appear to show two different animals. Pre-launch monkey had a mole, post-launch monkey has none. Insert conspiracy theory.

But the latest news out of Iran is that President Ahmadinejad is putting himself forward to be the country’s first astronaut. Seems that Mahmoud spent a lot of time watching Kim Jong Il over the years and finally decided “Screw this. I can out-crazy that dead bastard.” And here we are.

Clearly, the Iranian regime has set a high bar of idiocy. It will take a major effort over the next ten months to overtake what is, without a doubt, the most aggressive push in recent memory for a stupidity award.

Somehow, I think we have it in us to compete.

Also, did you know that there is a Wikipedia page titled “Monkeys in Space”?