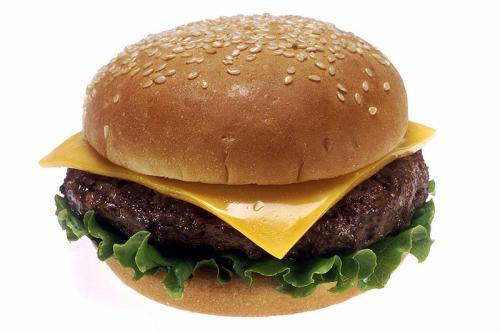 Across the back lane from my neighborhood high school is a fast food place where you can walk in any time of day and see groups of teens sitting around tables, texting and chatting. At lunch hour the place becomes a sea of trays littered with balled-up burger wrappings and spare ketchup packages. Just before 1:00 most days, a lot of the kids stand up, wave to their blue-uniformed friends who are working behind the counter, and stroll back to class, sipping the last of their large root beers.

Oh, the modern symbiosis between a high school and a fast food restaurant.

I'd be lying if I said the scene doesn't bother me. While I'm no fast food abstainer myself, two things about the situation keep me up at night: (1) that the local burger joint has become a stand-in for a school cafeteria, and (2) that these kids don't seem to worry a great deal about their daily cheeseburger and fries, despite the known harms to their bodies and the environment.

Agressive education has managed managed to effectively phase out smoking among teens - apparently high school 'smoke pits' have gone the way of the dodo bird - so isn't it time to start educating kids on how their food choices affect both their health and the wider world?

A huge interdisciplinary project at UBC called Think&[email protected] is aiming to do just that: teach K-12 students about how their individual food choices affect the vast ecosystem that includes the planet’s limited land and water resources.

"We assume that one of the reasons that children at schools make bad choices in terms of diet is because of their disconnect from the sources
of the food. They don't know where it comes from. They don't know how it is produced," says Dr. Alejandro Rojas of UBC's Faculty of Land and
Food Systems. Rojas, who is spearheading the $1-million project, is a social scientist originally from Latin America. He has spent most of his academic career studying the impact of human activity on the environment.

"We help the students to visualize food as a connector between humans and nature. We hope this will contribute to better choices and better decisions," he says.

About eight months into the five-year project, facilitators are already helping schools implement 'community impact projects' such as planting school gardens, collecting compost from student lunches, keeping bees, and overhauling cafeteria menus. Hand-in-hand with these concrete initiatives is a plan to help teachers bring food education into the classroom. The project also assists schools in monitoring their ecological and carbon footprints.

Rojas' Think&[email protected] team includes UBC researchers and students, the Vancouver School Board, Vancouver Coastal Health, Vancouver Food Policy Council, and several community-based organizations. The key, says Rojas, is that all the groups have a say in how the project will unfold.

"There's not only a lot to learn from each other, but the changes are impossible if we are not working together," he says.

According to project documents, the school-based initiatives fall under the general concept of improving food security in Vancouver. Experts represent the dimensions of food security by the acronym AAAASS: Affordability, Availability, Accessibility, Appropriateness (i.e. nutritionally, culturally, and morally), Safety, and Sustainability.

Rojas thinks the project could have a direct impact on the city in at least two ways: by motivating masses of students to take better care of their own health, and by offering institutions practical ways to achieve carbon neutrality in time for the province's 2012 deadline.

In terms of human health, Rojas says the project's pilot research showed that many high school kids were being malnourished but overfed.

"The epidemic of obesity that is so prominent in the US is also a reality in Vancouver," he points out. "Nutritionalists are telling us that this is the first generation of children in North America that will live less than their parents."
He hopes that, by giving kids a deeper understanding of the direct health effects of a poor diet, the project may help students make healthier choices for themselves.

As for the project's contributions to the environment, Rojas cites BC's Climate Action Charter, under which public institutions - including all schools - are committed to becoming carbon neutral by 2012.

"Institutions who are not able to become carbon energy neutral will pay big penalties," he says. "There is a big economic imperative... to reduce their carbon footprint. We saw here an important opportunity to collaborate with other institutions."

If some of the Think&[email protected] projects prove especially good at reducing schools' impact on the environment, project co-ordinators hope to turn them into governmental policy recommendations.

Rojas says the project's definition of success is different from that of other academic projects.

"We do not succeed if we publish fifty papers and make a book," he emphasizes. "We will succeed only if there are changes on the ground. If food gardens multiplied like mushrooms in the schools, if cafeterias become places where children want to eat and they're fed a nutritious and healthy diet, and if the curriculum becomes attractive, englightening... that's success."

So far, the project has already amassed a large number of excited students and teachers across the city at the fifteen schools in which they
are working. "We have this sense of synergy and energy," he says.

So after this project runs its course, a high school student might walk into a burger joint and see not a delicious, crisply-wrapped cheeseburger, but this: a farmer planting Monsanto's Roundup-Ready Wheat, a rancher loading his cattle into a trailer bound for the abattoir, a Mexican migrant worker picking tomatoes that will end up at the ketchup factory that has thick smoke spewing out of its stacks, and a scientist perfecting her 'fried burger flavour' droplets in a laboratory.

Would the student still choose it? 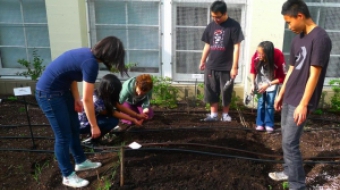 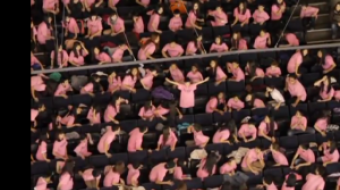 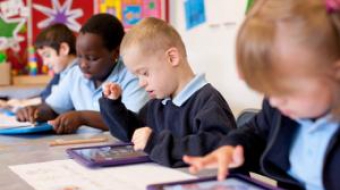