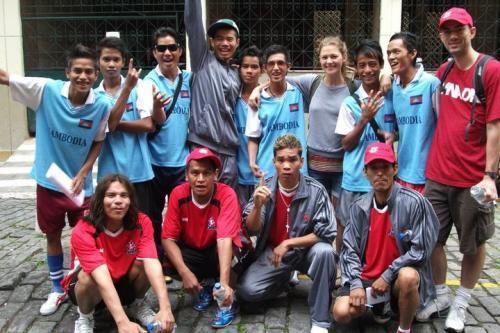 Team Canada with Team Cambodia from the 2010 Homeless World Cup. For our in-depth coverage of last year's tournament, click here.

Members of Canada's men's and women's squads will leave tomorrow to travel to Paris, France, where they will compete in this year’s Homeless World Cup. This year, five men and eight women from BC will join four men from Ontario to represent Canada at the international tournament.

“We really are so proud of the players that will be making up Team Canada, many of whom come from the PHS’s New Fountain Shelter,” Liz Evans, Executive Director of the PHS. “This is something the Downtown Eastside can be so proud of.”

This will be the first year Canada has sent a women's team to compete at the Homeless World Cup. Last year, Canada's men's team took home the tournament’s Fair Play Award.

All players have been recently affected by homelessness. Many have made significant strides towards getting stable housing, employment and dealing with addiction issues.

Prior to departing for Paris, the team will be assembled at the PHS Community Services Society’s Life Skills Centre in the Downtown Eastside where they will take part in a pre-departure dinner, photos, and a team blessing with a First Nations Elder. The team will be joined by members of Vancouver Whitecaps FC.

Media are invited to attend. The team will be departing at 5 a.m. the next morning (August 17, 2011) to travel to Paris.