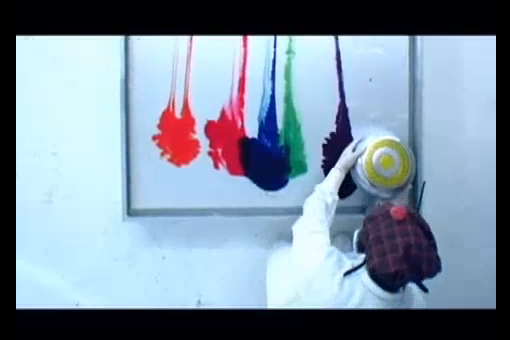 Screencap of Jason Young's short film The Curling Stones, on which 2054 is based.

At 8 o'clock tonight in New York City, Vancouver artist Jason Young will set the rooftop of Soho House aglow with his new project 2054. The artwork, a showcase of sculptures, installations and actors, is based on the very Canadian sport of curling.

Instead of earning points, Young and his teammates will aim to create a “tapestry of bleeding colours” by hurling customized curling stones with glowing eco-friendly resins down a 50-foot “light rink.” The rink, having been painted by the resulting comet-trails of colour left behind by the LED resins, will later be divided into 10 individual “light box paintings.”

The effect will be beautiful, but Young had more than beauty in mind when conceiving the project.

“Curling is the only sport where communication and collaboration alter the trajectory,” Young said of his project’s theme, “and [it's] a sport that suggests we are much more likely to resolve our differences by focusing on the things we agree upon.”

Young hopes 2054 will inspire his audience to see these traits as the key to making the world a better place.

2054 is based on Young's previous work, The Curling Stones, a short film directed by Pascal Franchot. In the film, Young had to use curling stones containing toxic resins. He is performing the artwork in the film again, this time before a live audience, because his new curling stones are now green—that is, the green, yellow, blue and red resins are now eco-friendly.

Young has always utilized unconventional materials for his art, including automotive lacquer and foil. His unique point of view and the work that results from it have earned him international acclaim, as well as a place in major collections such as that of Hewlett Packard, Progressive Insurance, The Tucson Museum of Art, Four Season’s Group and the Kresqe Museum of Art.

Young and his guests will enjoy the official 2054 after party at the cocktail lounge Darby Downstairs, located at 244 West 14th Street in New York City.

Discovery, creativity and fun at The Hungry Oven