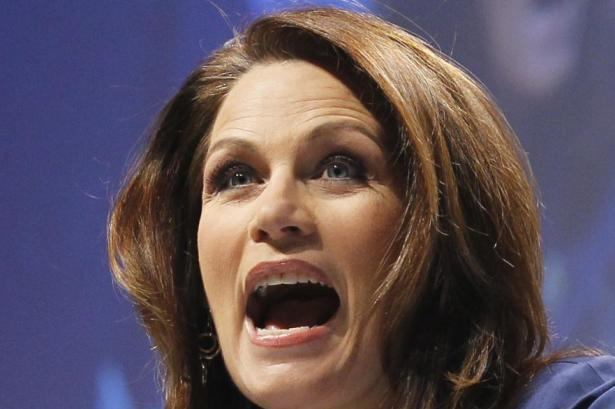 Dubbed "Crazy eyes" for her unflattering Newsweek cover, Michele Bachmann has proven herself a serious presidential candidate with the Iowa victory. Still, she has an impressive collection of crazy quotes that make Canadian politicians' gaffes look innocent by comparison.

Check out our top 10 picks:

1. "There are hundreds and hundreds of scientists, many of them holding Nobel Prizes, who believe in intelligent design." (Oct. 2006)

2.  "If we took away the minimum wage -- if conceivably it was gone -- we could potentially virtually wipe out unemployment completely because we would be able to offer jobs at whatever level." (Jan. 2005)

4. "What I want them to know is just like, John Wayne was from Waterloo, Iowa. That's the kind of spirit that I have, too." (*note: Movie star John Wayne was born in Winterset, Iowa. The John Wayne to whom Bachmann mistakenly referred was a serial killer. June 2011.)

5. "I wish the American media would take a great look at the views of the people in Congress and find out: Are they pro-America or anti-America?" -(Oct. 2008)
6. "Many teenagers that come in (to work) should be paying the employer because of broken dishes or whatever occurs during that period of time...after six months, that teenager is going to be a fabulous employee." (Jan. 2005)
7. "Does that mean that someone's 13-year-old daughter could walk into a sex clinic, have a pregnancy test done, be taken away to the local Planned Parenthood abortion clinic, have their abortion, be back and go home on the school bus? That night, mom and dad are never the wiser." (October 2009)

8. "Gay marriage is probably the biggest issue that will impact our state and our nation in the last, at least, thirty years. I am not understating that.” (March 2005)

9. "And what a bizarre time we’re in, Jan, when a judge will say to little children that you can’t say the pledge of allegiance, but you must learn that homosexuality is normal and you should try it.” (March 2004)

10. "This really is the number one issue for our country right now, how are we going to deal with this threat of radical Islam.” (Sept.2006)