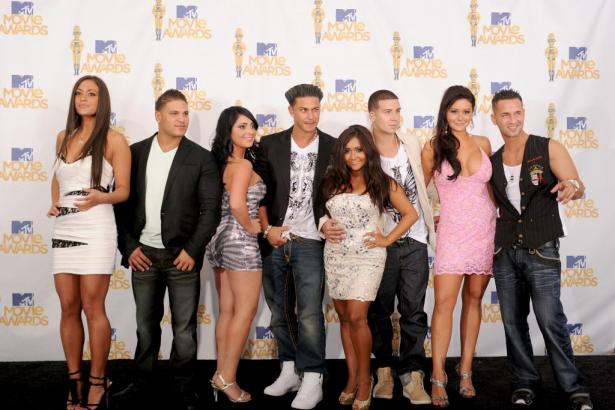 No more of Abercrombie & Fitch's preppy fashions for Jersey Shore. In a kind of reverse-endorsement deal, the company has offered to pay the cast "a substantial payment" to quit wearing its clothes.

The American retailer is "deeply concerned" that Michael Sorrentino (aka "The Situation") could cause "significant damage to [its] image," A&F said in a press release from the company's Brand Senses Department Tuesday.

The 29-year-old tends to lift up his shirt to show off his super tan muscles, and the underwear logo is often on display, the Wall Street Journal notes. In the latest Jersey Shore episode, he wore a pair of neon green A&F sweatpants.

"We understand that the show is for entertainment purposes, but believe this association is contrary to the aspirational nature of our brand, and may be distressing to many of our fans," the press release read on. And they're "urgently waiting a response."

But the company didn't always want to diassociate from the show. In fact, it released the "Fitchuation" t-shirt last year, according to the Hollywood Reporter.

"Abercrombie & Fitch, their most popular shirt, they told me, is 'Fitchuation.' I mean, where did they get that from? Obviously from myself," Sorrentino told New York magazine at the time.

But, according to the Speakeasy, the company confirmed that the shirt was sold as part of its “humor graphic tee assortment.”