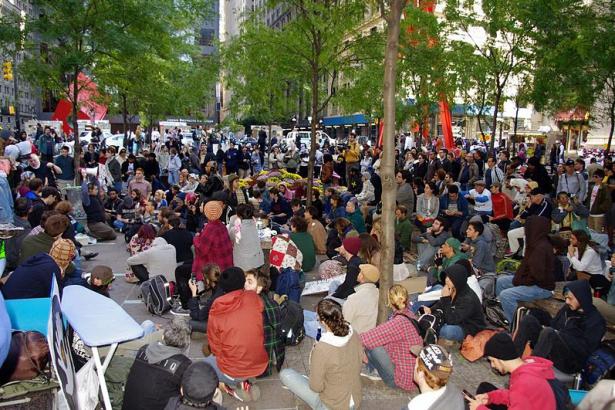 "It's pretty amazing, actually," said Micah White, the senior editor for Adbusters. He said that the "Occupy Wall Street" movement, prompted by Vancouver-based Adbusters magazine, was spread through twitter and social media among U.S.-based activists; a video by hacktivist group Anonymous helped to spread the word, as protesters set up camp on Wall Street on Saturday.

White credited the democratic protests in the Middle East as inspiration for the recent campaign.

"We're trying to follow the model set up by the Egyptian activists to have an encampment and hold a peoples' assembly," he said. "This is how it's done – you pick a symbolic place, set up camp, and hold a people's assembly and decide what your demands are."

"It's the spirit of the new kind of democracy that we're entering," he said, adding that the "revolutionary winds that started in the Middle East" have finally reached North America.

Although the event has been covered widely in newspapers, including the Wall Street Journal and The Guardian, it was largely ignored in the television media, aside from an extensive report in Moscow-based Russian Television. The RT report showed protsters of all ages rallying against banks, among them a nine-year-old boy who alleged that bankers were the revers of Robin Hood, "stealing from the poor" and giving to rich people.

"This is an opportunity for independent journalism to strut its stuff," White said of the protests. "Mainstream media has been belittling it or ignoring it...It's not that there is a total media blackout but there is a kind of belittling and insulting tone taken. The corporate media is showing its true colours."

White noted that public support for the protest has been immense, with celebrities like rapper Lupe Fiasco tweeting widely about the protests and donating 50 tents to the cause.

And what do the protesters want as a result of the sit-in?

Addressing President Obama's recent announcement about raising taxes on the rich, he said:

"I think the hopeful sign will be when Obama comes down to Wall Street to talk to the protesters directly."