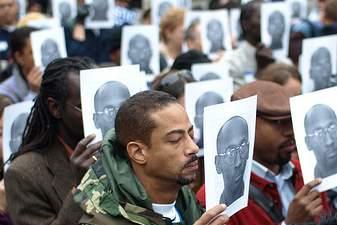 The state of Georgia killed Troy Davis yesterday for murdering a police officer in 1989, a crime of which many believed him innocent. Meanwhile, B.C.'s Clifford Olson, who left a legacy of fear in Canada after he pleaded guilty to murdering 11 children -- he claimed to have killed over 100 -- is finally on his death bed from cancer, after having lived to 71 years of age.
Unlike Davis, who pleaded his innocence to the last moments of his life, Olson bragged of his crimes and expressed no remorse.

"No longer a debate"

Is the death penalty outdated and wrong? Or could it be justified in specific cases? Dr. Robert Gordon, Professor and Director of Criminology at SFU, expressed his thoughts:

"The death penalty debate has occurred in Canada; it's no longer a debate, and I'm quite content with that," he said. "I see no value in reopening it."

Few countries in the world still actively practice capital punishment. In fact, more than two-thirds of the countries in the world have abolished it, according to Amnesty International. That's 96 countries. Nine countries (Bolivia, Brazil, Chile, El Salvador, Fiji, Israel, Kazakhstan, Latvia, Peru) will sentence death row for exceptional crimes, and 34 countries still practice capital punishment but haven't executed anyone in the past 10 years. This includes Algeria, Russia, South Korea and Sri Lanka. In total, only 197 countries are still abolitionist and retentionist.

"While a majority of the world – more than 65 per cent of all countries – has abolished the death penalty in law or practice, the United States remains one of the top countries responsible for executing people," the petition read. "The state of Georgia shamefully executed Troy Davis on September 21, 2011, despite serious doubts about his guilt."

Gordon believes that the death penalty should remain abolished in Canada -- even in the case of serious criminals such as Olson -- due to the grave implications if an innocent person is executed.

"One of the major problems is that if there are mistakes, and there have been lots of mistakes made in trials. If people are wrongfully convicted, and then they're executed, there's no way in which their life can be restored," Gordon said.

"Our criminal justice system is not infallible and for that reason alone, we probably should maintain our current vision which is no capital punishment in this country."

Other Canadians seem to agree with this position.

Death penalty not the answer

"The death penalty dehumanizes societies that tolerate it...It does not bring back the dead, it is not a deterrent, in the US anyway, its administration is terribly expensive, and it does not make society safer," Steven Forth wrote on Vancouver Observer's Facebook.

"Canada is not too soft on most crimes (although white collar and environmental criminals generally get a pass). Our justice system needs to be much swifter but longer sentences and extreme measures like the death penalty are not part of the answer."

Gordon believes an important factor to consider about the death penalty is that it doesn't work in reducing crime rates.

"(The death penalty) has no impact on deterrence; in fact, the homicide rate has been steadily declining since the death penalty was disposed of," said Gordon.

The debate about the death penalty seems to have had at least some impact on judges south of the border.

Derrick Mason was recently executed by lethal injection for committing a murder during a store robbery -- it was the third execution in the U.S. this week. The retired judge who sentenced Mason, Loyd Little, wrote a letter to Alabama Governor requesting Mason's sentence be turned to life in prison with no parole instead.

"Years of experience and seeing so many other capital murder cases where it was imposed and where it was not imposed ... I realized it really was not the right decision,"  the judge explained in his letter. His request went ignored, and Mason was pronounced dead after a lethal injection last night.

While recent polls show Canadians are split over the death penalty, it remains a widely accepted concept in the U.S.

Republican presidential candidate Rick Perry is said to have executed at least one innocent man and several minors since he took began working as governor of Texas. He reportedly fired investigators who carried a man's proof of innocence, according to the Daily Kos. However, mention of Perry's executions was greeted with wild applause at a debate in February, and has not deterred his popularity among voters.

To date, Perry's execution record is 234. The number will soon include Tedderick  Batiste, John Hummel, Jean Joseph, Albert Turner, just a few, who are all awaiting death row, according to the Texas Department of Criminal Justice.