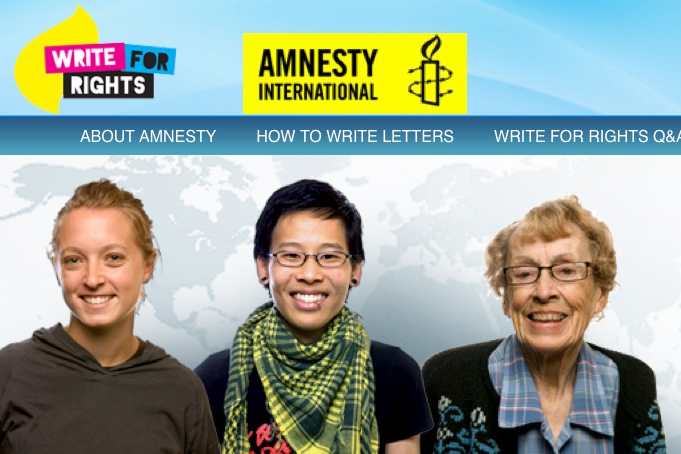 The most valuable gift you give this 2011 holiday season may cost no more than a postage stamp.

Every year, starting with a massive international kick–off on December 10, Amnesty International holds a global write–a–thon to support individuals facing abuses of their basic rights and freedoms. Dubbed Write for Rights, the campaign empowers any of us, in the free world, with basic information to send actual or virtual messages of protest to those in power; and cards or emails of solidarity and encouragement to the individuals themselves.

“When you raise your voices we hear them in our country and around the world. They are louder than any rock band, than any army, than rocket fire or fighter jet. Your voices are the future, the voices of reason, equality and justice.” — Aung San Suu Kyi, video address at U2 concert 2011.

In 1990, Aung San Suu Kyi was under house arrest in Myanmar (Burma) when she and her party won 80 per cent of the seats in their national parliament. She spent approximately 15 of the next twenty years under house arrest. In 2010 she was freed and named Amnesty International (Amnesty or AI) for its role in helping secure freedom and alleviate suffering for people like herself.

On its Write for Rights pages, Amnesty also features less well known but equally as important figures. Mohammad Sadiq Kabudvand is an Iranian journalist and Kurd. He is the father of human rights in Kurdistan and the founder of the first human rights organization for the Kurdish minority. The Iranian government barred him from publishing articles about Kurdish culture in 2004 and in 2007 he was arrested. He’s still in jail.

With a click of your mouse, Amnesty International provides you the email addresses and the simple facts to write to the Iranian head of the judiciary and ambassador in Canada on his behalf. You can also send a message (email or letter) to Kabudvand himself.

Amnesty has succeeded in making helping others enjoyable and potent at the same time. So far, the 2011 campaign boasts over three–quarters of a million actions. Success stories of prior year campaigns inspire more folks to participate each year.

One such success story is of Yusak Pakage, an Indonesian put in jail and sentenced to 10 years for peacefully displaying a symbol of Papuan independence, the Morning Star flag. Write–a–thoners wrote on his behalf and he was released in 2010. Pakage thanked AI: “for me, Amnesty is everything... From someone who suffered and who now smiles again thanks to Amnesty.”

Amy Kiara Ruth, rehabilitative movement educator has held AI sponsored Write for Rights gatherings in her Vancouver home for over seven years. “Most religions see this time of year as being about hope and bringing illumination. Write for Rights,” says Ruth, “is the perfect antidote to the rampant consumerism of the holiday season.”

Jamie, one of Ruth’s friends voices a sentiment common to most of us, “I find it difficult to not get swept up in the heart wrenching stories of torture and abuse many people face in our own country and globally.” Jamie says he feels energized by exercising his freedom of speech to “improve the way we all live together.”

Ruth supplies wholesome veggie soup, letter writing materials and print–outs of cases like Kabudvand’s to her friends, including this VO reporter. A deep compassion for others is evident. At this year’s Write for Rights gathering, VO asked Ruth what inspires her. “A responsibility of being human is to speak out for social justice and human rights: this gathering is a small way to contribute to this important work,” she answers.

The gathering is cozy, with some on the floor and others at a table strewn with envelopes, colored pencils and collage materials. This year we created cards out of small woodblock prints donated by an artist, also a regular. One went to Jean-Claude Roger Mbede in jail in Cameroon for his sexual preference, another to the family of Natalia Estemirova. Estimirova, a Chechen human rights leader, was murdered in 2009. By clicking on the link to her name, you can learn about her courage and e–sign an international petition; or go further and send a letter, e.g. to the President of Russia, requesting the government properly investigate her death and extend protections to human rights defenders.

Growing up, Ruth remembers her parents writing letters for Amnesty social justice cases. A letter, thoughtfully written, holds great power. Each individual letter is concrete proof of awareness and commitment. That power increases exponentially with each additional letter as an accumulation of snowflakes eventually produces an avalanche. A 2007 Amnesty International ad shows the power of letters to beat a bullet and the won the Silver Lion at Cannes. Fittingly, at least two others at Ruth’s Vancouver gathering had parents and/or grand–parents as letter writing role models when they were little.

Whether or not you were lucky enough to receive such early tutelage, you too can add a Write for Rights component to your own holiday gathering.

Imagine, for every present you open, you could sign an online petition for a cause you believe in. For every Hanukah candle you light, you could write a letter or send an email. Why not send a few messages of hope? It’s possible you might spread a lot of joy in the process.

“Now more than ever we're seeing the effectiveness of all kinds of action…,” says Ingrid Rose, another regular at Ruth’s.

“We are thankful for these and all the good things of life. We recognize that they are a part of our common heritage and come to us through the efforts of our brothers and sisters the world over. What we desire for ourselves, we wish for all. To this end, may we take our share in the world's work and the world's struggles.”