Saving a Vancouver icon from destruction: the story of the Hollow Tree 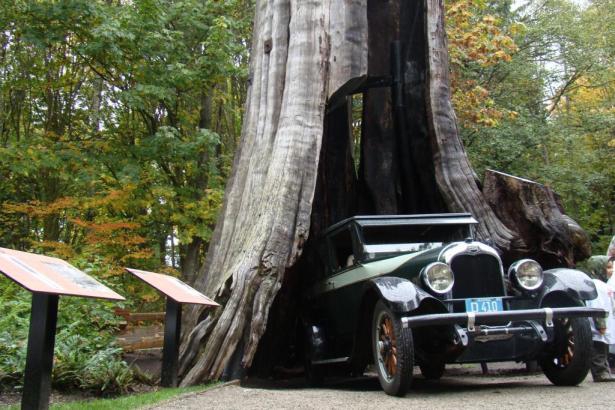 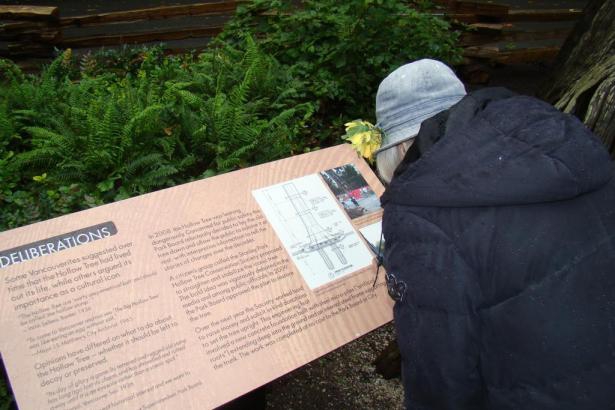 The official opening of the Hollow Tree included a vintage car reenactment, with an antique Auburn that had been photographed in the tree in 1927. Photo by Alexis Stoymenoff.

The famous ancient Western Red Cedar that looms over Stanley Park finally received its official commemoration Wednesday, in a ceremony co-hosted by the Vancouver Park Board and the Stanley Park Hollow Tree Conservation Society.

The tree has faced a long and arduous battle over the past three years, having been saved from imminent destruction and restored by a group of local citizens as a natural monument.

“This Hollow Tree has attracted visitors and dignitaries right from the early days,” said Parks Board chair Aaron Jasper, recounting his days as a local tour guide, when he would drive his bus to visit the iconic tree.

“It is known all around the world, and by generations of Vancouverites,” he said.

The Park Board recently completed the landscaping and installed plaques at the site to inform the public about the Hollow Tree’s history, and to acknowledge significant donors who made its restoration possible.

History of the Hollow Tree

The 1,000-year-old Hollow Tree is one of the oldest local landmarks in Vancouver. In actuality, it is not a living tree but the hollowed-out snag of an ancient cedar that has existed in Stanley Park since the very first settlers arrived on the Pacific Coast.

Since Stanley Park’s opening in 1888, the tree has been a well-known tourist attraction, mainly because of the large hollow opening that visitors could step – or drive a vehicle – inside. The tree appears in countless photographs from early Vancouver, and many consider it an important symbol as one of the few remaining fragments of the vast, ancient forests that once covered the Lower Mainland.

Critics of the restoration project have argued that it was a pointless act to spend money and time holding up an “ugly old stump”. But according to Vancouver historian and engineer Bruce Macdonald, the tree represents something much more significant.

The survival of the Hollow Tree has been threatened on multiple occasions – first, after violent storms blew through the park in the 1930s, and again in 1962 when Vancouver was ravaged by Hurricane Frieda. The Park Board was forced to remove several feet off the top because of damage, and workers eventually had to brace the inside of the tree with metal poles.

In December 2006, another big storm hit the city, tearing down a number of trees and causing a great deal of damage to the park. The giant, lifeless trunk was tipped over and leaning so precariously that it was thought to be a danger to the public.

The Hollow Tree’s predicament sparked a heated public debate over the possible alternatives. During months of deliberation at Park Board meetings, officials and citizens spoke out about how to proceed. Should the city pay for the tree to be restored and held up with artificial supports? Or should the tree be laid to rest like any other dead tree, to decompose as part of the natural ecosystem?

Many of the arguments against propping up the stump focused on the idea of interfering with the environment. Some thought a tree with metal supports would seem odd and unnatural. In the end, it came down to the cost.