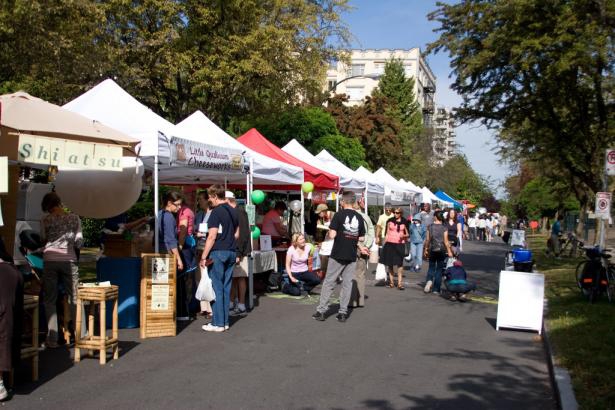 A new study released this week reveals that Vancouverites are generally happy with the local economy and with their quality of life, in spite of economic turmoil being experienced around the world.

The study, conducted by Justason Market Intelligence and commissioned by Junxion Strategy Inc., asked 947 Metro Vancouver residents about their satisfaction levels in regards to the economy, natural environment and municipal services. Results show that in the Metro region, 77 per cent of residents are satisfied with the economy in their community. Specifically in the City of Vancouver, 64 per cent reported being satisfied and only 36 per cent said they were unsatisfied.

Peter ter Weeme, principal at Junxion Strategy, said that people in the city seem to realize how good we have it here. The majority of citizens reported being satisfied with many aspects of their day-to-day experience, including things like green space, schools and tap-water quality.

“Every day we have to appreciate what we have,” said ter Weeme. “This is a charmed place.”

While the study reports high satisfaction rates for general quality of life – up to 90 per cent in some areas – respondents did identify areas of concern, including traffic volume and homelessness. In the City of Vancouver, for instance, 65 per cent of residents said they were dissatisfied with the situation around homelessness.

According to ter Weeme, the concerns people cited are evidence that Vancouverites are living in what he calls a “bubble”.

“I don’t want to undermine the issues we have on the Downtown Eastside, or affordability in the real estate market. These are real concerns, but these are issues of abundance, not scarcity,” he said.

“After traveling in the developing world, I got home and the big issue was the Hornby Street bike lane. And my reaction was to shake my head and say, ‘People, get a grip’.”

He explained that as “satisfied” citizens, people in Vancouver have a responsibility to acknowledge their role in the bigger picture, and to recognize how their lifestyles and choices have an impact on the rest of the world.

“Our quality of life that we enjoy in the Western world is happening at the expense of the developing world,” he said, although he noted that the city is on the right track when it comes to social justice initiatives and environmental awareness.

With the municipal election quickly approaching, ter Weeme also suggested that recent discussion around local food projects has drawn attention to BC’s vulnerability in that area.

“Things like the chicken coops and wheat fields on the front lawn – are they ultimately going to solve those issues? No, but I think they sensitize people to the broader issue of food security. And you’ve seen a remarkable renaissance in people’s desire to be connected to food,” said ter Weeme.

He said that in terms of sustainability and security, Vision Vancouver has made some significant advancements in the past three years at City Hall.

“Vision has recognized many of these issues, sees the security that comes from being more mindful of our ecological footprint and trying to do things to reduce it, and [from] trying to create more connectedness on a local level,” he said.

The Justason poll’s findings signal an overall contentment among Vancouverites with quality of life and the natural environment – a result that even ter Weeme found somewhat surprising given social concerns and the current Occupy Vancouver movement.

“In Vancouver, we’ve managed to find a certain balance between social, economic and environmental issues. We are in the top percentile of regions around the world,” he said.

He explained that now, in this time of urgency, our priority should be to continue acting as a “model” and to “help other parts of the world figure this out.”