What's your vision for Vancouver's viaducts?

Public voting is open until Sunday in the City's competition for new solutions around the viaducts. 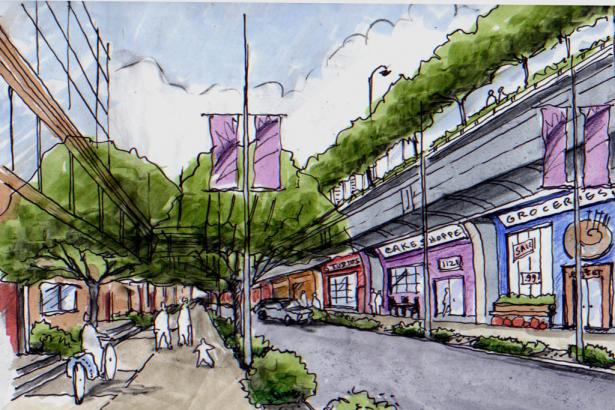 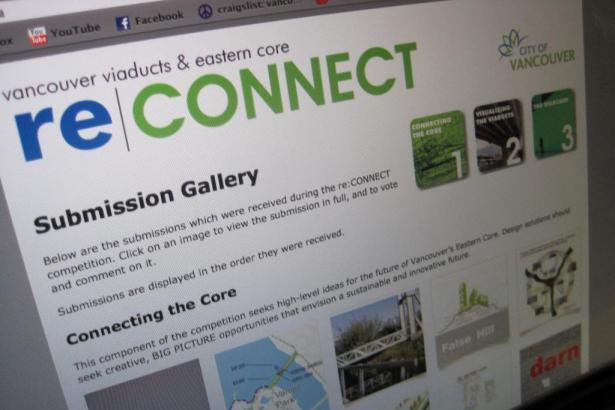 Image courtesy of the City of Vancouver.

This week, Vancouverites have their last chance to vote on over 100 submitted designs in a competition to generate new ideas for the city’s downtown viaducts.

The re:CONNECT project, run by the City of Vancouver’s Planning Department, is an interactive, open competition that has encouraged designers, architects and citizens from all over the world to submit their unique visions for the area.

According to Director of City Planning Brent Toderian, it’s all part of the ongoing effort to find potential alternatives for reworking the land area around the False Creek Flats and the Georgia and Dunsmuir viaducts.

“We had never come to any conclusions about the long-term future of the viaducts. And this question has been raised many times over the years, frankly, ever since they were opened,” he said.

“We’ve taken a neutral approach to them in all of our planning for the area, but that can be a challenge.”

The viaducts have a long history in public discussion around city planning. The freeways they were intended for in the 1960s were never approved, so the structures have since been integrated into the landscape in a sort of unfinished state. Toderian explained that the viaducts recently became a bigger priority after a motion raised by councillor Geoff Meggs, as the City was doing substantial work in the area around False Creek.

“I think the motion from council was that we were needing to come to conclusions about a number of key planning areas that touch the viaducts," he said. "We were in the early stages of a Transportation Plan update, which could include the transportation implications of the viaducts. So it seemed like an ideal time to ask ourselves the big question and come to a definitive conclusion on it.”

In keeping with the City’s attempts to promote public dialogue, a competition was created to develop ideas and engage residents on the subject. In addition to the more traditional approaches like open houses and online surveys, re:CONNECT has allowed professionals and non-professionals to submit their own designs.

While the winning entries will not be directly implemented, aspects from several of the best designs will play an important role in the process moving forward.

“An idea competition, the value of it is to generate a plethora of ideas,” Toderian explained. “Certainly to inspire our design team to think outside the box, but also to inspire the community itself to think differently.”

The team received a total of 104 unique entries from 13 different countries. A jury made up of architects and urban planning experts has been deliberating since the submissions came in at the start of November.

Interestingly, Toderian said jurors often had difficulty discerning which entries had come from local professionals and which were entries from abroad.

The winners in three different categories will be announced at a free public event on December 1, held at SFU Woodwards and featuring a panel discussion with speakers and judges. Top jury choices in the professional stream could take home cash prizes of up to $5000.

The outcomes of the re:CONNECT initiative will be considered in the new Transportation Plan starting in February 2012. But even though the City has started the process now, Toderian noted that major changes or actual construction may not be seen for years to come.

“Our planning in the area is often over a ten, twenty or thirty-year time frame,” he said. “So the question doesn’t have to be, do you remove them now? It can be, do you anticipate their removal at some time in the future, and do you factor that into your planning?”

To check out the viaduct design submissions and vote on your favourites, visit the City of Vancouver’s re:CONNECT website. Online voting for the People’s Choice award will be open until Sunday, November 27.