Park Board commissioner Niki Sharma says the proposed expansion of Kinder Morgan’s oil sands pipeline—combined with the closing of spill response centres—would set the city up for disaster. 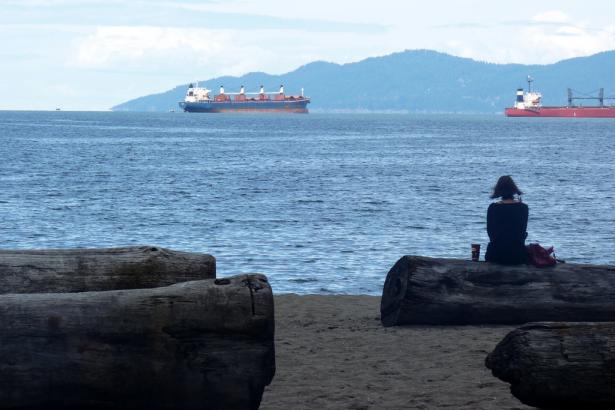 The waterfront view could include up to 360 oil tankers per year, if the pipeline expansion is approved | Photo by Maya-Anaïs Yataghene

The frightening vision of a Stanley Park beach covered in oil is part of what compelled Vancouver Park Board commissioner Niki Sharma to voice her growing concerns, with an upcoming motion to oppose the expansion of a Kinder Morgan pipeline from the oil sands to Vancouver’s port.

Given the federal government’s recent decision to shut down a regional environmental emergency response centre—which would play a critical role in the event of a spill—she says the city is being set up for a “disaster” situation.

“The Vancouver Park Board is an elected body, and our mandate is to preserve and protect our beaches and our green spaces. We manage right now about 24 kilometres of green space that would be bordering the waterfront,” Sharma told the Observer.

“And when we heard about the proposed plans to expand the pipeline and tanker traffic to the inlet it just caused us great concern because that’s something that could potentially seriously affect the areas we have to protect.”

Texas-based Kinder Morgan officially announced plans earlier this month to almost triple the capacity of their existing Trans Mountain pipeline, which currently runs from Alberta to Metro Vancouver’s Westridge Marine Terminal. The proposed $5 billion expansion would increase the pipeline’s capacity to up to 850,000 barrels of crude oil per day, making it even greater than that of the hotly contested Enbridge Northern Gateway pipeline. The expansion would also significantly boost the amount of tanker traffic in the Burrard Inlet, bringing up to 360 supertankers per year past the city’s shores.

Sharma said the Park Board motion—to be heard at the next meeting on April 30—is just the first step in countering Kinder Morgan’s proposed expansion. If the Board passes the proposal to take an official position on the company’s plans, she said, they can then move forward and discuss further action. Mayor Gregor Robertson has already publicly come out against the expansion project, joining Burnaby mayor Derek Corrigan in opposition.

“I haven’t heard anybody in favour of this expansion,” Sharma added, referring to her colleagues on Park Board and City Council.

“On April 30th, we’ll have the opportunity to hear from the public as well. So they can come forward with their views on how they see that this would potentially affect our beaches and parks, and whether or not we should take that official stance.”

Kinder Morgan is still in the early stages of the engagement process, with plans to file an application with the National Energy Board by 2014. If the project gets the green light, construction could begin by 2016.

Given the Harper government’s recent changes to federal environmental assessments, which appear to favour new resource projects, many say the fight against the proposed expansion will not be an easy one. But Sharma says city officials will likely be looking to partner with local organizations to find effective ways to address the issue.

“We definitely have, I think, an obligation as the Vancouver Park Board to stand up and use any authority we have in our political positions to figure out what we can do to oppose [the expansion],” said Sharma.