Much of British Columbia is proudly watching the Stanley Cup Finals, and much of it is partying in Vancouver's streets. All play, but who pays? Source: Vancouver Observer 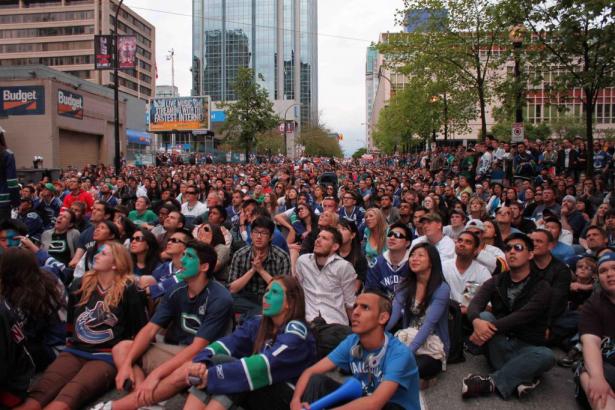 Photo by Darinka Aguirre for the Vancouver Observer www.dp.darinkadesign.com

Tens of thousands of Canucks fans have poured into downtown Vancouver on game nights as the team has battled its way toward the Stanley Cup, and Mayor Gregor Robertson says the party comes at a price.

The city has already spent about $1.3 million on policing and outdoor public events like giant TV screens to broadcast games, and it would like Victoria and Ottawa to pitch in to cover the costs.

City council is expected to vote Tuesday to approve taking $680,000 out of the city's reserve fund to help pay for the festivities.

Robertson says the federal and provincial government have been earning tax receipts from increased food and liquor sales in Vancouver during the series, and he'd like to see them put some of that money back into the city.

``It would be nice if we had some support for our budget, but that's in their hands ... but hopefully they will come through with something,'' Robertson told reporters.

Premier Christy Clark says if the Canucks win the Stanley Cup, the provincial government will help Vancouver pay for the celebration but policing costs will be up to the city. She couldn't yet say how much the province might contribute to celebration costs.

``We haven't gotten to that stage but we're working on that. But again, we're crossing our fingers and hoping there will be a reason to spend a little bit of money,'' she told reporters Monday.

Canadian Heritage Minister James Moore said the city hadn't made any request for a contribution, and avoided committing to any funds.

``The Canucks having a great Stanley Cup run like this, I think, is an economic boon for the city of Vancouver,'' Moore told reporters in Ottawa.

People in Vancouver and even suburbs such as Surrey are filling restaurants and pubs and having a great time, he said.

As for the cost of hosting those revellers, Moore was non-committal.

``Well, we'll I suppose cross that bridge but any discussion of anything like that after the moment has happened would be jinxing it and shame on you for tempting that.''

The Canucks are in Boston tonight for Game 6, starting at 8 p.m. ET.

Vancouver police requested, and the province agreed, to close liquor stores in the downtown core at 4 p.m., a tactic they used successfully during the Olympics to keep crowds under control.

``This was done during the Olympics, and there was an immediate reduction of alcohol-related violence and disorder,'' Solicitor General Shirley Bond said in a statement.

She said the decision was not taken lightly. ``However, protecting public safety must be our overriding concern.

From the Vancouver Observer

Should the Province help pay for the Stanley Cup Finals Vancouver street party?  We want to know what you think.  Comment below.