Upintheair Theatre brings "The City and the City" to the city. Noire futurology @ PuShFest. 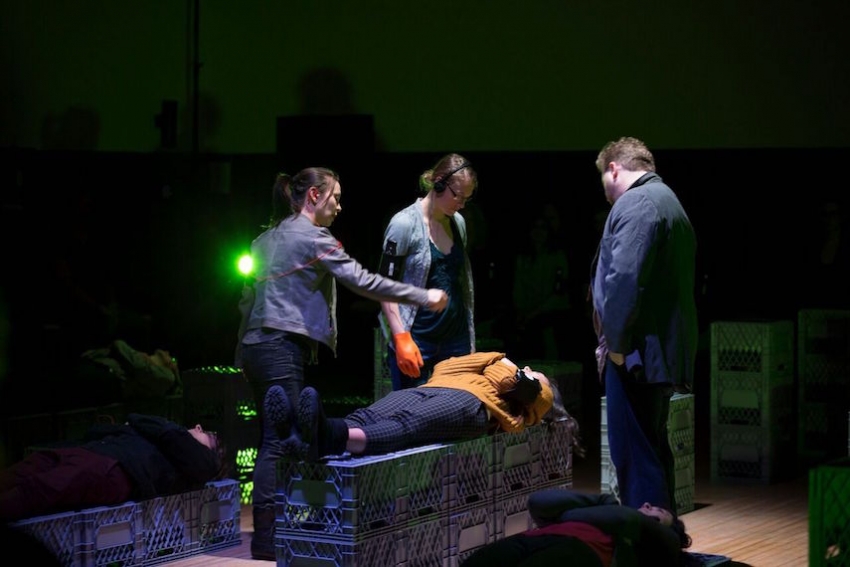 The body in question offers no answers. Photo: Matt Reznek

“Something there is that does not love a wall,” the poet reminds us, and the warning seems timelier than ever today.

Nor is it just the “big, beautiful” $8-12 billion variety of physical wall that we need to worry about. Still less lovable is the mental wall that keeps us from even seeing – let alone helping – the vulnerable fellow-humans in our very midst.

Yet that’s precisely the kind of wall that separates the two coterminous (yet mutually invisible) conurbations in The City and the City, this year’s PuShFest offering co-produced by a pair of Vancouver's edgiest theatre companies, Upintheair and The Only Animal.

The two alternate-reality cities overlap, but their citizens never meet except via very limited trade through a single militarized checkpoint. They’re like the layered texts on a palimpsest, occupying the same space but mutually unintelligible. One city’s denizens must take no notice of the other’s, must even go so far as to “unsee” any accidental glimpses.

Otherwise, they are “in breach,” an infraction that could bet them banished (or worse) into a shadowy limbo called “the breach.” These diktats are enforced by a mysterious surveillance cabal known as (you guessed it) simply “Breach,” with a capital ‘B.’

Sounds like a lot of dystopian background to convey in just an hour-long stage play, doesn’t it? But director Kendra Fanconi and playwright Jason Rothery funnel it all into us in the most efficient way possible – murmured directly into our ears through wireless headphones that are handed out to each of us audience members as we file into Strathcona’s Russian Hall.

We are then ushered into our “seats” – stacks of milk crates arranged in a theatre-in-the-round layout. Stacked in the center of the auditorium, more milk crates comprise the entirety of designer Natalie Purschwitz’s stage set. Bathed in the chill hues of Jonathan Kim’s muted spotlights, the whole room throbs to the ominous chords of sound designer Yik Sze Tam’s synthesized score.

The action all takes place in the centre of the auditorium, which is strewn with milk crates and marked with crosses like a high-school gym floor. The proscenium stage at the end of the hall is screened off (with more milk crates) and reserved for stage manager Stephanie Elgersma and her crew, barely half-visible in the eerie light of their control consoles.

There, through the wireless earphones, they issue commands to select audience members, inaudible to the rest of us. They order us to crowd in on or recoil away from the actors. Sometimes they have us shift and re-stack a few of the auditorium’s plastic cubes for scene changes.

The net effect is unsettling. We’re under the control of unseen and unheard forces, never knowing what we – or our neighbour in the next seat – will be called upon to do next. Some of the audience turn out to be planted actors. The very crates we sit on can be yanked out from under us and repurposed as props.

All of which goes to enhance the noire mood of the play. But it remains just that – a mood – without coming to any coherent dramatic resolution.

The story, such as it is, takes for a starting point a cadaver, a murder victim, which has somehow been ported over from one of the palimpsest cities to the other. Did the victim arrive here alive, or already dead? Did she come in via the official checkpoint, or illicitly “in breach?”

These are the first urgent questions facing a hard-boiled municipal detective (played by Upintheair co-founder David Mott) who is assigned to the case. He’d be only too happy to hand it over to the shadowy Breach enforcers. Except that Breach inexplicably wants no part of it, obliging Mott to collaborate instead with his opposite number, another municipal gumshoe (Conor Wylie), from the other city.

It turns out the murdered woman was a researcher who had been flirting with the dangerous idea that the very existence of two orthogonal cities might be a hoax. What if it were just a fantasy promulgated by cynical outsiders (American corporations are mentioned) to keep the populace docile? Could the dreaded Breach overlords be no more than made-up bogeymen invoked to give the delusion some “teeth?”

Godfather of these doubts is a smooth-talking senior academic (Stephen Atkins). Derailed from the tenure track for his political incorrectness, he has long since recanted his heresy just to retain his paltry adjunct professorship. But he still profits through black-market sale of artefacts from archaeological digs into the pre-split history of the palimpsest cities.

As the dragnet closes in on this villain, audience members are wirelessly mobilized to mob him into a corner of the auditorium and wall him in with a bastion of milk crates. In the process, Mott’s character finds himself dragged into the limbo of “the breach,” only to discover that its mysterious enforcers are all-too-real after all and he has no choice but to join their shadowy ranks.

Well, it’s sort of a promotion, but it comes at a cost. “Will I never see my people again?” he plaintively asks his new captors/colleagues. “Oh, you can see them,” they reassure him, “as long as you remain unseen.”

It’s tempting to try to decode The City and the City as a timely allegory – but of just what remains unclear. As the aforementioned poet goes on to say, “Before I built a wall I’d ask to know/What I was walling in or walling out/And to whom I was like to give offense.”

These are precisely the questions left hanging in this play. The cui bono of its implied conspiracies is never spelled out and, with all the elaborate production apparatus, the characters never get a chance to develop enough for us to really care about them.

But the fancy, experimental stagecraft does succeed in creating a gathering sense of amorphous foreboding without any ultimate catharsis. And that might turn out to be the most apposite comment of all on these troubled times.

Vancouver Police are warning the public after a woman was tackled to the ground and sexually assaulted last night. Here's more, from the press release sent to Vancouver Observer by the Vancouver...
Vancouver ObserverJan 7th, 2014