Decision to build new Vancouver Art Gallery wins widespread praise, but not from all

Artists and art lovers across Vancouver are praising city council’s decision to establish a new home for the Vancouver Art Gallery, despite vocal criticism from detractors, including one prominent art collector.

The art gallery’s new location will be at Larwill Park, which is currently a parking lot on the corner of Cambie and Georgia streets. It’s not far from the current art gallery, and right behind the Queen Elizabeth theatre.

City council unanimously approved a plan last week to give the art gallery a new home, as it has outgrown its current building.

The gallery directors are hoping to raise $150 million from private donors to fund the project, in addition to $100 million each from the federal and provincial governments. BC's Liberal government has already pledged $50 million.

Some critics have expressed concern that funnelling so much money into one pot will take away private and public funding from other arts organizations, and could particularly hurt smaller galleries, but supporters of the plan are drowning out the naysayers.

A stronger cultural identity for Vancouver

Adam Lupton opened his own gallery in Chinatown just over a year ago, but said he has no qualms about the sharp focus on the city’s flagship gallery. In fact, he has nothing but good things to say about it.

“More art in Vancouver is definitely a good thing,” he said, calling it “something that is sorely needed.”

He added that a strong cultural identity around the arts is somewhat lacking in Vancouver, and thinks a bigger main gallery would help local artists by bringing in more international attention.

Opponents point to costs, land use

That’s not to say that the plan has no detractors. Bob Rennie is known for his condo developments, but also for having one of Canada’s biggest contemporary art collections. He recently sat down with Vancouver Observer Publisher Linda Solomon to explain what he thinks could have done better.

Rennie told Solomon last month he thought the city should sell the land at Larwill Park to a developer, and then use that money to fund an improved VAG at its existing location. He said that would leave money to spend on other arts projects. 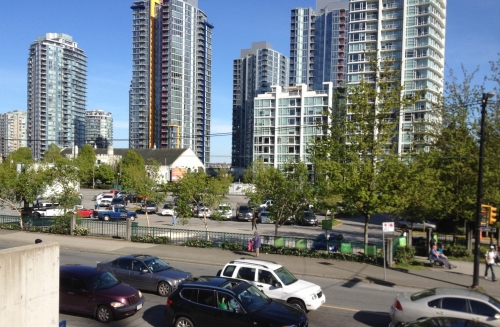 This parking lot is slated to become the next Vancouver Art Gallery. Photo by Chris Lane

The lot is currently zoned commercial, so it’s not prime condo land, and a recent Vancouver Magazine article reported that there is no big rush of developers wanting to buy it up. But Rennie thinks the land could be worth over $200 million, and said only a fraction of that would cover the costs of doing a Louvre-style underground expansion for the existing VAG.

Rennie also said he had concerns about how the gallery will manage to secure the required funds from Vancouver’s relatively small pool of philanthropists. A report to city council states that private donors have already pledged $40 million to the project, but that still leaves $110 million in private investment to go, according to their budget projections, on top of the government funding that has yet to be secured.

And if they don’t manage to raise enough money? “It will permanently damage philanthropy in our city,” warned Rennie.

He said that while new visitors to any city go first of all to the main art gallery, on subsequent trips people seek out the smaller artistic venues with their own distinctive charm. He thinks more money should go to those places instead.

“That's real city building," he said. "That's what we should be doing."

Rob Gloor, executive director of Vancouver’s Alliance for Arts and Culture, thinks that rather than taking money away from smaller institutions, the hubbub around the VAG might actually promote arts funding across the board.

The push for a new VAG could “build excitement for other projects, too,” he said, suggesting the momentum generated by the VAG will encourage philanthropists to donate to other arts groups as well.

“What’s good for the flagship institutions is also good for the community at large, because it increases the awareness of Vancouver’s art scene,” he said.

Gloor was also enthusiastic about the enhanced opportunities for local artists to showcase their work on a bigger stage.

Beyond the impact of the expansion of the VAG itself, there’s also the prospect of a new arts centre moving into the current location of the VAG, in the old courthouse at Hornby and Georgia. City councillors want the building to be reserved for a new cultural institution, so their plan will increase the number of artistic places downtown.

Supporters of the new VAG hope it will add to what has already become something of a cultural hub along Georgia that already includes two big theatres, the main library, the CBC, and the Centre for Performing Arts.

Kazymerchyk, who was one of over 300 arts professionals to sign a petition in favour of a new VAG, is looking forward to an expanded “cultural continuum” in the downtown core.

She called the council decision a “great victory” along the course of a long labour of love for the gallery’s proponents. The gallery’s director, Kathleen Bartels, and others have been fighting for this project for years, so Kazymerchyk is pleased to see their efforts vindicated at long last.

“It’s something to celebrate,” she said.

FUSE at the Vancouver Art Gallery