Get in on the revolution – exclusively for Observer readers join Evo Car Share now for Free and get 30 free minutes. 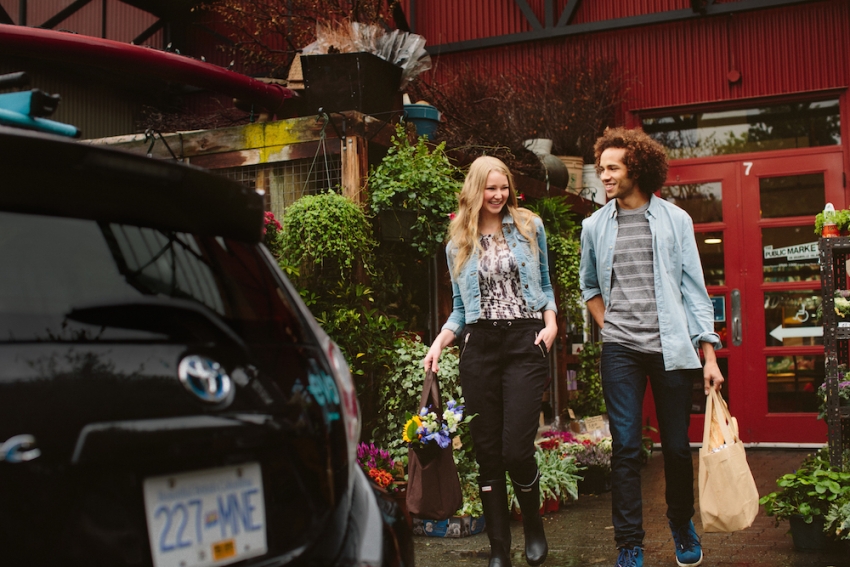 Vancouver is in the midst of a transportation revolution. Photo courtesy Evo Car Share.

Vancouver is in the midst of a transportation shift that’s revolutionizing the way we get around our city.

“What we’re witnessing,” said Tai Silvey, Director at Evo Car Share, “is a convergence of high housing costs, dense communities, being the “Greenest City,” the sharing economy, bike lanes, transit and traffic congestion working together to forge a new type of mobility. And resourceful Millennials are leading the way."

According to research by Evo Car Share, Millennials are more likely to view transportation as a dynamic equation they love to solve: check your car share app on the way to the bus stop; bike to the gym then bus or car share and throw the bike on the rack if you’re not up for cycling home.

“Car sharing," said Silvey, “with its affordability and flexibility, is a major component in their transportation tool kit.”

In fact, according to Silvey, Vancouverites have embraced car sharing more enthusiastically than any other region in North America. We are the fastest growing car share market on the continent. In 2015 over one quarter of Vancouverites had a car share membership and one global market research firm forecasts memberships will continue rising at close to 20 percent a year.

Early entrants to Vancouver’s car share market were Modo with its smorgasbord of vehicle options and car2go with its squadron of identical smart cars.

Evo was created by BCAA, whose local roots allowed the company to seize the opportunity to serve Vancouver’s unique identity.

“Thanks to demand from Vancouverites, we’ve grown to 1,000 cars in 615 days – the equivalent of adding one Evo every 15 hours,” said Silvey.

Serious changes ahead as the mobility revolution speeds up

Car sharing has become a significant new business and given us different options for getting around but its entrance into the market meant serious changes to private car ownership and taxi use.

Similarly, ride-hailing services like Uber and Lyft, have the potential to seriously disrupt existing businesses like taxis. Metro Vancouver is the largest metropolitan region in North America where Uber is still banned.

And much more radical disruptions are not far off. The emergence of autonomous (or self-driving) vehicles will mean a convergence of car sharing, ride-hailing, and public transit, and will likely have dramatic impacts.

Fully seventy-five per cent of consumers think ride-hailing is the way of the future even though only 37 per cent have ever tried it.

Self-driving cars weren’t on the radar a few years ago but already more than 60 per cent of Millennials and GenXers wish they could be more connected while they drive.

In Metro Vancouver alone, there are 61,000 vehicle injuries per year. ICBC says that 80 percent of vehicle fatalities involve distraction, speed or intoxication, all of which could be eliminated by autonomous vehicles.

The impact on jobs could be dramatic and a 2016 TransLink study reports that “In addition to employment change, automated vehicles could change how government revenues are derived from driving. Depending on how vehicle services develop, parking revenues, enforcement penalties and fuel taxation could all be heavily reduced.”

And repercussions could be even more widespread. Electric vehicles (EV’s) grew 60 percent in 2015. That’s the same growth curve that allowed the Ford Model T to crush the horse and buggy market at the beginning of the last century.

EV’s could cause an existential crisis for the oil industry, warns Bloomberg — an important industry for Canada and one in which we are already a high-cost producer.

Another million new residents are expected in Vancouver by 2041. Eighty percent of that growth will be accommodated by “strategic infill” — increasing the density of existing urban areas.

And as we live closer and closer together, the sharing economy becomes even more attractive. That combined with technology will radically change how we get around.

We can’t predict how all of these technologies will combine to transform how we move through our city, but we can be pretty confident it’s happening soon.

For Millennials, whether they’re checking their car share app on the way to the bike share or while ride-hailing, car sharing will continue to be an important tool for solving their dynamic transportation equation.

And as we all hurtle toward this new transportation paradigm, it’s time for a serious public conversation about what this all means for jobs, for related industries, for the sharing economy and for this unique city that Vancouverites love.

Get in on the revolution – exclusively for Observer readers join Evo Car Share now for Free and get 30 free minutes.

Anti-pipeline protests push Ottawa to set up meeting with chiefs