Board of Change learns of City's ambitious cycling and walking targets 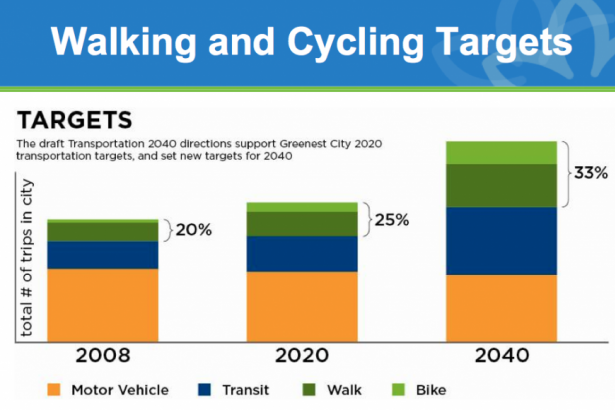 What's up with the bike lanes, the greenways, and the Broadway Corridor? We're a few steps closer to finding out. Board of Change, a Vancouver-based business and sustainability association, hosted a presentation in Yaletown during which Deputy City Manager Sadhu Johnston and Director of Transportation Jerry Dobrovolny showed off some key aspects of Vancouver's transportation 2040 plan, and how they would allow Vancouver to become the "greenest city in the world" by 2020. 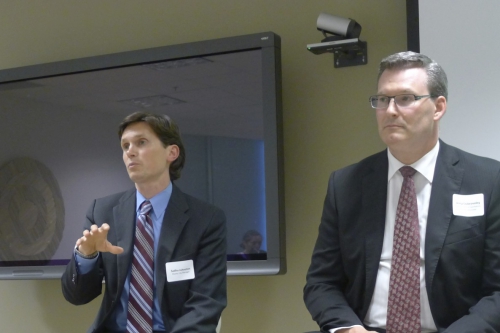 Johnston said that the City had been rethinking transit entirely, and that the process was "not without heartburn." Indeed, you would be hard-pressed to find a group of stakeholders with more diverse (and often divergent) interests.

Dobrovolny took the floor first for a 25-minute presentation, beginning with a recap of Vancouver's "transportation story", including the aborted freeway project that would have carved up Coal Harbour (yet which has still left us with those viaducts, and without Hogan's Alley). Circa 1976, 90% of those coming into Vancouver's city centre did so by car. Back then, the notion of reducing that number to 75% seemed insanely ambitious.

Getting there & getting around

However, that goal was not only achieved but exceeded by 1992; 70% of Vancouverites were driving into town, while the rest were cycling, walking, or catching public transit. Five years later, Vancouver's transit plan included no increased capacity for cars. Anyone driving into the downtown core would have presumed as much: we seem to have the congestion and parking problems of a much larger city.

Also like a much larger city, we have rapid-transit options and centres of urban density, which are what the City of Vancouver is relying on for its latest transit-plan iteration. The idea of environmentally-friendly economic zones is in line with Board of Change's ethos, which is that sustainability and environmental responsibility are ultimately good for business; or, as BoC puts it, "Make money, make meaning".

In painting the broad strokes of Vancouver's Transportation 2040 plan, Dobrovolny pointed to a trifecta (well, a tricycle) of sustainability focal points: economy, environment, and people. These three are not equally weighted, and change along with the political tides.

Currently City Hall sees the economy as the main point of focus, as those of us watching Vancouver develop would have already guessed. 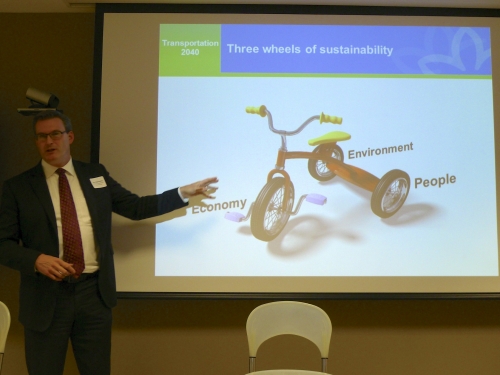 To meet Vancouver's Greenest City goals, said Dobrovolny, the city needs to become much more walkable and much more bike-friendly.

There are some cyclists (such as myself) who are bike-lane-agnostic: we don't care if we have separated pathways or not. We'll assert right-of-way and use a street's left-turn lane as per the road laws, steel juggernauts of doom be damned. However, most casual cyclists would not do so, hence the city's insistence on those separated bike lanes.

Since Vancouver is not Amsterdam, we're applying these lanes in an ad-hoc fashion, and only now is the two-direction separated pathway becoming the norm. Conversely, many Dutch cities are at the point where they're exploring year-round heating systems for their purpose-built cycle-path networks.

Vancouver will also introduce a bikeshare program, similar to those found in Paris, New York, Toronto, Melbourne, and Washington, D.C. More on that below.