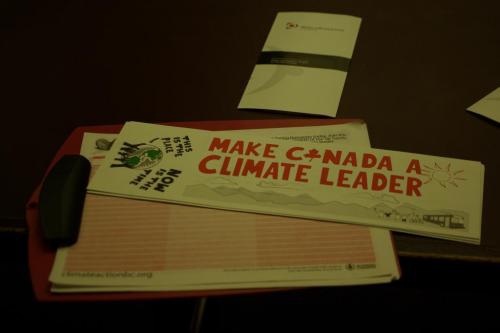 “It’s hot in here. There’s too much carbon in the atmosphere. Step up, Canada, and make a move. Make us proud in Copenhagen”

Starting today in Copenhagen leaders of about 170 countries will be discussing the future of global climate change. What will the next – after controversial Kyoto – UN Climate Summit bring?

Not only politicians, but many activists have been preparing for this summit. Last Monday I witnessed a curious preparation for a flash mob to take place at Waterfront Station at around noon. A bunch of young people with a huge sign saying “Canada, Make Us Proud in Copenhagen” performed their version of the song It’s getting hot in here. Their goal was to catch attention of those walking by to the upcoming summit and inform people of how they can influence the official position of Canada. They sang something like: “It’s hot in here, there’s too much carbon in the atmosphere. Step up, Canada, and make a move, and make us proud in Copenhagen.” 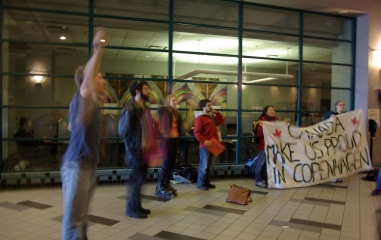 The group was obviously excited and passionate about the issue, and so were many others present at the Foreign Policy Camp, a conference hosted that day at SFU Harbour Centre. It was a very unusual conference. In the opening word the speaker said that the idea of this conference was coming from students who wanted to organize a forum for discussing the foreign policy concerns that Canadians might have; but do it in a fashion differing from a usual conference of this sort where the participants would be mainly white males, high in the policy-making hierarchy. The informal setting of this conference began with an opening welcome from an amazing African drum performer who engaged the whole audience in drumming. His aim was to encourage everybody that expertise is not the exclusive permission for engaging into some activity (be it African drumming or foreign policy-making). What is more important is whether you care enough. 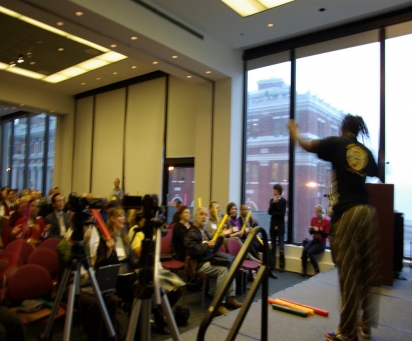 I was present at the session on Climate Change where activists from different sectors presented their strategies, successes and failures in the business of influencing politicians and citizens of Canada with regards to the global climate change problem. There were academics, members of various NGOs and student clubs, just interested individuals. A very interesting project was presented by faculty members of the University of Calgary, representing the most reluctant province to acknowledge the reality of global warming. They shared about the global forum World Wide Views that took place in Canada and a number of other countries this past September. Randomly selected citizens participated in the discussion on global climate change and formulated policy recommendations for their governments to take into account during the Copenhagen Summit. The results obtained in Canada showed that citizens: 1) recognized global climate change as an urgent issue and 2) requested the officials to move forward at the upcoming UN summit regardless of the US position and 3) to commit to increasing the CO2 reduction targets even without a similar commitment on the side of the developing nations. 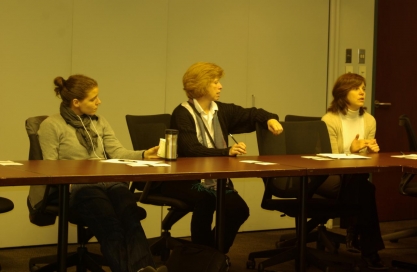 Compared to the results obtained in the citizen discussions of other countries, Canadians were a bit more conservative. Moreover, the activists present at the Foreign Policy Camp session shared that many Canadians still don’t realize that their country is behind even the US and Saudi Arabia in its commitment to action on global warming. That’s why several groups of young people have been and will be organizing flash mobs around Vancouver to deliver the message of how really low Canada’s commitment on this issue is. They said that many are still holding onto the stereotype of Canada as one of the greenest nations in the world.

Unfortunately, it’s not just holding onto the stereotype. Have you tried counting the number of people sipping their warm drinks from paper cups as you are coming to work? It has to be more than holding onto a pleasant stereotype because even at this progressive Foreign Policy Camp conference we had a lunch where pineapples were not the only product imported from afar… I am not pointing finger at the organizers of this conference, but to the global reality of insatiable consumption. This plague is not exclusive to the developed nations only. I am from Ukraine, where as soon as we got rid of the Soviet deficit on soap and clothes, we gladly indulged into consumption feast. And as the politicians start deliberating today, I know I can do more than give my policy recommendations to them.