Bing Thom was memorialized Sunday with a piano recital in the acoustically magnificent concert hall of his own design, UBC’s Chan Centre.

Known by his first name to all, our beloved Bing Thom was memorialized Sunday with a piano recital in the acoustically magnificent concert hall of his own design, UBC’s Chan Centre.

No speeches, just a lone piano virtuoso, whose notes rang to every seat in the house with a pristine brilliance that Bing himself planned meticulously.

Bing was one of Canada's foremost architects, having received multiple honorary degrees, the Order of Canada and the Royal Architectural Institute of Canada's highest honour, the RAIC Gold Medal. A cast of hundreds, maybe thousands, could write marvelous columns about Bing's impact on their lives. This one is mine.

Many know that Bing opposed the proposed Vancouver mega-casino, but most don’t know how much. He thought casinos were a scourge that had no place in the human city that he planned to help shape here. It was Bing who bankrolled the community-based opposition group, Vancouver Not Vegas.

He fully committed his human and office resources to the cause, shouldering the lion's share of all expenses.

From the beginning, we had a phenomenal team of activists, political hands, community organizers, and online expertise. But we were unknown, and needed credibility fast. We needed support from major public figures to draw more media so the public would swing behind us. That was a huge ask in a town where the establishment does not buck the provincial government lightly.

Bing tirelessly called all his friends. Few would join at the beginning, which surprised him. But he kept at it, and slowly, one or two were persuaded to publicly step up. Once the first said yes, others began to follow. Then more. Then the phones began to ring. We penned an op-ed with Peter Ladner, and the floodgates burst.

We were in business.

Vancouver Not Vegas became the little rocketship that could, when everyone said we couldn’t. "Done deal," they all said. Few knew our secret weapon was Bing Thom.

As must be the case with so many others, his quiet efforts behind the scenes gave me a name and public profile. In middle age, my life took an entirely unexpected turn toward media, and it was Bing who set the course.

What not to build

The mega-casino fracas wasn’t the first time I’d seen Bing sabotage a project he didn’t approve. We’d first met years earlier when my husband’s family consulted him to advise on a potential development proposal for one of our land parcels.

Bing knew a building isn’t a thing, it’s a place in a changing human context. It should reflect its makers and have a purpose connected to the continuing life that's lived in and around it.

He had a deep and abiding love of family enterprise and small business, which he considered the true backbone of the B.C. economy, and its greatest renewable resource in good times and bad.

Family enterprise was us, and who we remain today. The proposals and partners before us, from major developers, were wholly unsuited to our family’s approach to business and to a property that had been in the family for half a century.

Bing torpedoed the project, killing a handsome fee for himself and a short-term win for us.

We’ve been fast friends ever since.

Inspired by his longer view, we went back to the drawing board, re-visioning a more modest approach that expressed our family’s character and values. The collection of shops in our buildings became the anchor to what’s now known as the Armoury Design District; a smaller scale, organic and highly successful streetscape of local merchants and designers.

Bing traveled the world as an acclaimed success, building magnificent concert halls, university campuses, libraries, and opera houses, but somehow he always had time to visit our little corner.

I think he felt a kinship with my father-in-law Jab, who founded the business in 1948.

Both had crossed the ocean to Canada as little boys, leaving a beloved parent in their home country, not to be seen again for decades. Both grew up as minorities in a sea of white faces on Vancouver’s west side, struggling, adapting and succeeding. Out of place and in it at the same time.

If there’s a word for that, it’s not in the English language.

Bing, and later his wife Bonnie too, would drop by our family’s shop near Granville Island to trade books and anecdotes with my husband Ravi. We shared a fascination with the history of economics, empire, capital, the Opium Wars and the subjugation of India and the Middle East.

These were not academic subjects, they were intensely personal to Bing—and to us all. In one way or another, colonialism had shaped all our lives and family histories and brought us here.

Below is a (poor quality) photo from a visit with Bing at his office a few years ago. On the table to Jab’s right is a gift from Bing, the book From the Ruins of Empire, a study of British imperialism in China, India and the Muslim world. 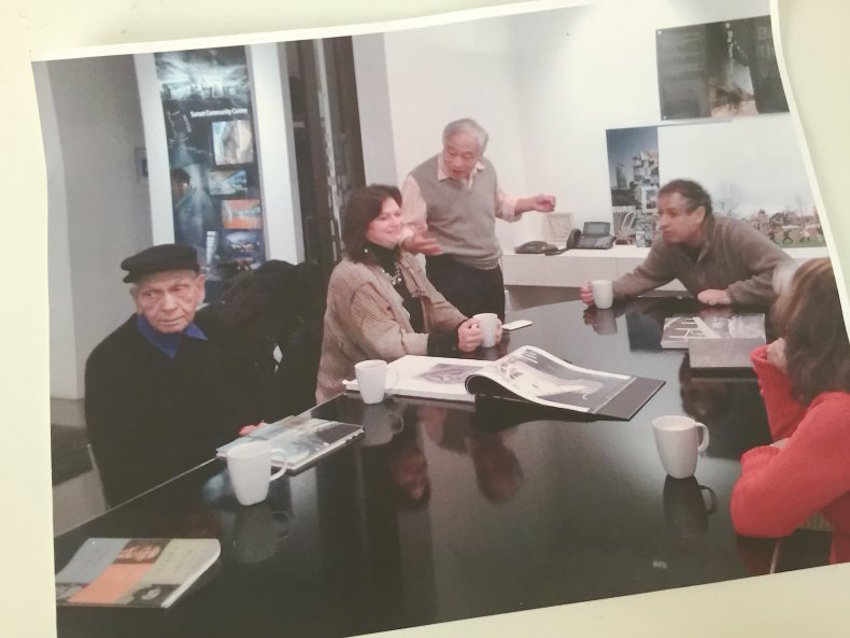 This, mind you, was a business meeting about buildings and architecture. That’s how Bing rolled.