Teens spoofed Dateline series "To Catch A Predator" -- but it's not clear who they caught. 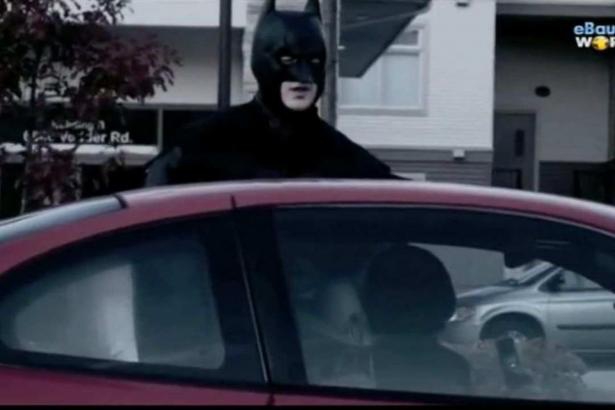 Photo of teen vigilantes apparently at work courtesy of YouTube.

Chilliwack Mounties are investigating three teens who posed online as underage girls in a bid to lure men into meeting them for sex. The teens, 17 and 18, would then confront the men while dressed as superheroes -- including Batman.

The stunts were taped and posted recently on YouTube, but have since been removed.

Police said Wednesday that they're not clear yet if charges will be laid against the teens, and that their main concern is to make clear to the teens that they have put themselves in potential danger.

VANCOUVER -- A series of Internet videos of young men in superhero costumes confronting people they claim are child predators was either the work of caped crusaders or Keystone Kops.

The videos, posted to YouTube and viewed hundreds of thousands of times, show two young men dressed as Batman and the Flash confronting men they claim they met online by posing as 15-year-old girls. The RCMP say the videos were shot in Chilliwack, B.C., east of Vancouver.

They were apparently a spoof on the Dateline NBC television series titled "To Catch a Predator,'' in which a host confronts alleged predators who believe they are about to meet teens for sexual encounters.

On the Internet, the young men behind the videos have been lauded as heroes, cut from the same cloth as the fictional crime fighters who inspired their disguises.

Offline, the videos have prompted an investigation by the Mounties, which say the creators put themselves in danger and should hang up their capes.

The RCMP said four young men aged 17 to 20 posted fake personal ads on websites such as Craigslist and Plenty Of Fish, pretending to be a 15-year-old girl looking for older men.

They exchanged messages with men on the site and agreed to meet.

Dressed as superheroes, the young men then approached the people they believed responded to the ads, calling them pedophiles as the camera rolled.

The videos show snippets from the purported Internet conversations, in which the older men use sexually explicit language, despite being told they are chatting with an underage girl.

In at least three videos that have been reposted by other users, the men who were targeted deny they were there to meet anyone. In one clip, the person dressed as Batman claims to be a police officer.

The original videos have been taken down, and RCMP Cpl. Tammy Hollingsworth said the young men who made them are co-operating with investigators.

"They've told investigators that they've made a mistake, and immediately removed all the posts related to their clips,'' said Hollingsworth.

"I guess they didn't really realize it would be so big. They didn't think about the consequences or the effect it would have on their personal safety, the safety of other children, and the fact that they could be bringing potential predators into our community.''

Hollingsworth said investigators have spoken with the young men behind the videos.

She said officers from the force's major crimes and child exploitation units are also attempting to identify the older men in the videos. They still need to confirm whether they were, in fact, the same men who responded to the fake personal ads, before determining whether they could face charges of child luring.

Hollingsworth said the stunt was dangerous,

"We do have investigators online, but we go through the proper channels to do that, to gain evidence, to support charges, so leave it to the professionals,'' said Hollingsworth.

"They might meet up with someone who's not really happy with what they've done. And who knows if they have a weapon or what they might do? It's a huge concern.''

On their Facebook page, the young men said little about their newfound notoriety but asked visitors to stop reposting their videos.

"Having these up just causes more problems,'' said a message posted from the group's account.

"Due to police intervention, we will be discontinuing the ... series,'' said another post by the same user. "I hope those who viewed the videos shared many laughs with us while we could.''

Others on the site praised the young men as heroes.

"I think what you're doing is great. We all need to work together to protect our children from these monsters,'' wrote one user.

"You guys are vigilante heroes,'' wrote another. "Just stay safe out there.''