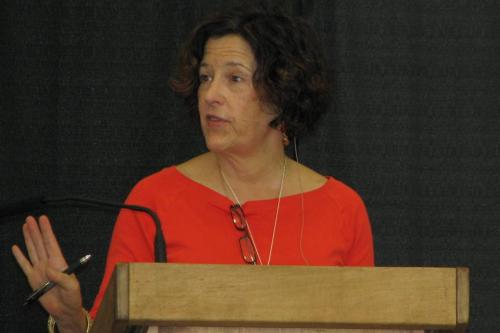 Keynote speaker Arlene Goldbard, a California-based social activist and cultural critic, made a feisty plea for the intrinsic value of the arts. “Our society makes a fetish of numbers, without meaning... Art is the principal container of meaning, the essential experience of being human,” she asserted.

Goldbard also blasted artists for perpetuating an aura of “entitlement and privilege” that alienates the general public. She conceded, “There is a snobbery contaminating the non-profit arts sector... [and as a result] advocacy doesn’t win many allies.”

She offered four recommendations: search for stories and images that capture the imaginations of the public; abandon weak economic arguments in support of the arts; integrate artistic activity into public and private sectors; and become involved in the creation of cultural policy at all levels of government.

At a workshop later that morning, Goldbard gave participants free reign to lament the lack of funding, political will, media attention, arts education, and so on. She suggested, in turn, that arts practitioners stay focussed on inclusivity, adopting a “beginner’s mind” to carefully steward those unfamiliar with, or even cynical of, artistic expression.

Over lunch, choreographer-producer Judith Marcuse aptly summed up the challenges the arts industry now faces, saying, “It’s not business as usual, but when was this business ever usual?”