Jay and Silent Bob return, on stage and on the air

Hitting the Vogue Theatre this Wednesday, "Jay and Silent Bob Get Old" features Jason Mewes in a live, uncensored podcast with Kevin Smith. 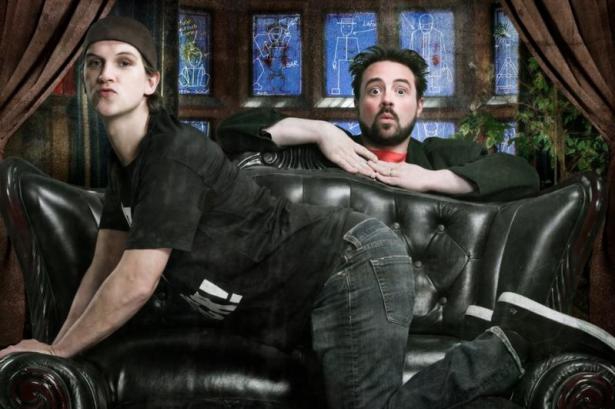 Ever wished you could eavesdrop on an intimate conversation between cult heroes Jay and Silent Bob? Well you can – every Wednesday when they broadcast their live, uncensored banter via the online podcast, Jay and Silent Bob Get Old.

And this week, you can experience it in person here in Vancouver, as actor Jason Mewes and his best friend, director-producer Kevin Smith take over the Vogue Theatre on December 7 for a live taping of their show.

“I’m really excited to come to Canada and Vancouver,” said Mewes during a phone interview from his home base in New Jersey.

“We both have spent some time out there, so we’ll have some good stories to talk about.”

The podcast, generally taped with a live audience, is now touring in select cities across Canada and the US. It started as an offshoot of Smith’s idea for a live podcast theatre, which came out of the Smodcast network he'd been developing over the past few years with his partner Scott Mosier.

“I had talked to [Smith] before about maybe doing a podcast, but I didn’t even think about doing it live,” Mewes said.

“It’s good because you feed off the energy of the audience. If I’m trying to tell something I’m hoping people will laugh at, if they’re laughing real hard then I get more into the story. If they’re not laughing when I’m hoping they’re laughing, I’m like, okay, they don’t think this is funny, it’s weird – better change it up and talk about something else.”

Mewes describes the show as a series of honest conversations, touching on his early days with Smith and their experiences in the cities they visit, as well as more serious subjects like Mewes’ struggles with addiction.

“It’s sort of like an hour-long improv of reality. I mean, they’re true stories but I try to tell them in a way that people can enjoy them and understand,” he said.

“There are some horrifying stories that I can look back on and sort of laugh at, or just be okay with. It helps me – I talk about all my stuff, I get it out and get to talk to everyone.”

Smith envisioned the podcast as a sort of therapy to help deal with some of the difficult issues in Mewes' life. After multiple stints in rehab clinics for drug problems and a heroin addiction, he picked up another bad habit, this time getting hooked on the pain medication OxyContin. Smith was a major source of support throughout, but sometimes his attempts to save his friend proved discouraging.

“I spent a lot of time alone and I really wasn’t accountable to anybody for what was going on,” said Mewes.

Now, he says the podcast gives him a whole audience to be accountable to. He keeps listeners up to date with his progress, telling everyone how many days he’s been clean. And sometimes, his stories help others dealing with similar issues.

“People after the show will pull me aside and say, ‘Hey, my brother was messed up for the last two years and I brought him to your show last time you were here. He started listening to your podcast and now he’s been sober for eight months cause you inspired him to get sober.’ So it’s been really nice,” said Mewes.

“It’s been great for me, and flattering and nice knowing that other people are getting something out of it besides entertainment and maybe laughs.”

Of course, the laughs are still a big part of the show. The two actors exchange funny (and often vulgar) anecdotes, and even invite audience members on stage to participate in sexual, improv-style games. And the title, Jay and Silent Bob Get Old, hinges on the friends’ self-deprecating acknowledgement that they’re no longer the carefree stoner kids they used to portray.

Now almost 20 years since he and Smith began their movie career with Clerks, Mewes says he’s starting to come to terms with his age. But despite the podcast’s slogan suggesting he and Smith are “bound for the grave”, the success of their show is proof that their careers are far from over.