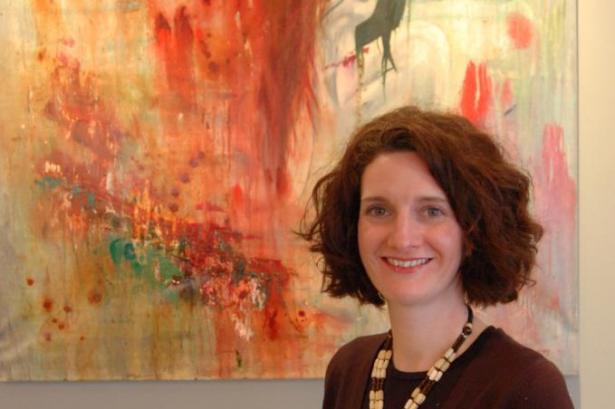 Il Museo, a community museum at the Italian Culture Centre in East Vancouver, opened its doors two years ago and Julia Murray became its new curator a few months ago. All exhibitions showcase the talents and accomplishments, as well as personal art and object collections, of local Italians.

Julia looks a bit Italian with her brown curly hair and dark expressive eyes, but her refined British accent hints more accurately at her origins.

"I was a bit surprised that they hired me since I'm not Italian. I'm doing my best to learn everything about the culture, as well as the language. So far I can only say some standard phrases like Mi chiamo Julia and Piacere ,but I would like to be at least semi-fluent eventually." she said.

The Italian Culture Centre was constructed by enthusiastic volunteers from the local Italian Community in the early 70's. The Centre opened in 1977. The Italian Culture Centre Society was formed and today, 34 years later, a total of 38 societies are affiliated with the vibrant self-funded Centre. An impressive array of events and classes are offered at the Centre; everything from learning Italian and Italian cooking classes, to bingo, movie nights, folk dancing, sports events and celebrations of Italian holidays.

The 2011 Summer exhibition at Il Museo will showcase treasured personal objects from various Italian families, accompanied by photos and short stories about the owner.

"I hope to inspire and educate the new generation of Italians about their families' backgrounds and history through this exhibition" says Julia.

Julia and her husband Grant, an IT Solutions Architect originally from South Africa, fell in love with Canada a few years ago while travelling through the country. After discovering Vancouver, they decided to move here.

"We both love London and Oxford where we lived, but we didn't want to be like so many of our friends who always wanted to move but never got around to it. When we started talking about our plans to immigrate to Canada we were surprised to find out how many people had thought about it too. We wanted to make our dream come true."

Julia and Grant arrived in Vancouver in July 2010. They rented an apartment in downtown Vancouver through Craig's list.

"We arrived from the airport early on a beautiful summer evening. We took a cab to our new apartment, put the suitcases down on the floor and headed to the mall to get the necessities like a blow up mattress and bed linen. We didn't want to spend the first night in our new hometown in a hotel."

The Murrays spent the next 3 months discovering their new surroundings and meeting new friends.

"It was amazing just riding a bike around Stanley Park and admiring the beauty that surrounds us here. We never tire of seeing the mountains and the ocean. Vancouver is an incredibly gorgeous city with so much natural beauty and the people are so friendly. We're so new to the country so it feels like we're in a honeymoon period still," she said.

For more information about the Centre:  http://www.italianculturalcentre.ca/