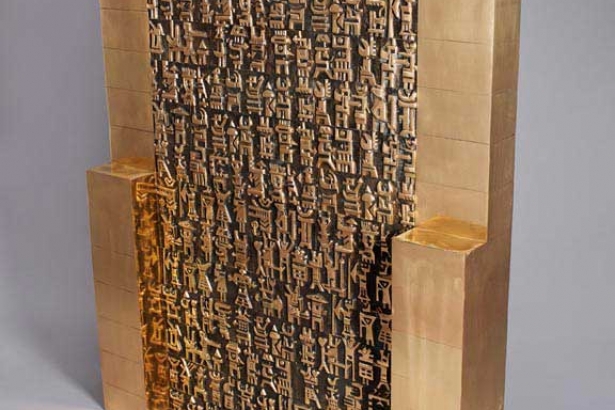 In a quiet corner of West Vancouver lives one of the most well sold, prolific, and influential Iranian artists since the 1960s. Parviz Tanavoli's quiet life in Vancouver belies his international acclaim. He has been shown in spaces as prestigious as the Museum of Modern Art in New York and the British Museum in London, and as far-flung as Australia and South Korea.

One of the founders of Iran’s 1960’s Saqqakhaneh movement, his work is sometimes described as “spiritual pop art”. Since 1989, Tanavoli has made Vancouver home. He also spends part of the year in Tehran and Dubai, coming back to Vancouver for the summer months.

“I [create better] in Vancouver than in Iran. Vancouver is a great place to concentrate and to make things, however my inspirations come from elsewhere…Vancouver carries no pain and has no problems, Iran is full of pains and problems. My art deals with problems," he told The Vancouver Observer.

When asked about his relative obscurity in Vancouver as opposed to his fame abroad, Tanavloi said simply, "I am not received in Vancouver, but I don't mind it. I am happy the way it is."

The movement between west and east, both conceptual and physical, of Tanavoli and 15 other Middle Eastern artists is highlighted in the Museum of Anthropology’s Safar/Voyage exhibit.

Safar highlights Middle Eastern Voices in the largest and most complex exhibition the MOA has put on to date, employing two galleries and covering over 8000 square feet of space.

It is the exhibitions' depth, and multi faceted perspective that Tanavoli feels are worth taking note of.

The piece invites viewers to consider a movement through history, from the highly advanced Persian civilization of Persepolis to the modern day, while questioning whether the piece speaks to nostalgia for past glory, or a protective desire towards a pre-Islamic, often obscured past.