Honeycomb Hideout: just below the highway, Ron Thom's mid-century marvel is ahead of its time.

The Carmichael Residence only has two bedrooms, and those bedrooms might seem small on paper. The master bedroom is 14'2" by 12'5", though the honeycomb shape serves it well. Originally the room had a window in the closet: cool though that may seem in theory, Jan and Jim thought better of it in practice, and that was one feature that they changed. The bedroom's glass door opens out onto the deck. The vanity has a flip-up mirror, and two hexagonal drawers; those drawers are currently at the museum as well.

Born in Penticton and a graduate of the Vancouver School of Art, Thom headed east midway through his career. He designed Massey College for University of Toronto, as well as the Prince Hotel and the Metro Toronto Zoo.

The Carmichael Residence is Thom's only full foray into hexagonal house design; Jim notes with a laugh that Thom "realized his mistake."

All in the timing

Jan and Jim knew what they wanted when they found this place: they were shopping for Ron Thoms. They put an offer on the house at the same time as another couple, a couple that wanted to tear the house down and presumably to replace it with something more... rectangular. That offer fell through, and so Jan and Jim moved in and got to work.

And get to work they did. The combination of construction difficulty and attention to design detail required to get the Carmichael Residence to its current state is way beyond normal weekender DIY work. Jan and Jim, though, are not DIY weekenders. Jan is an interior designer and women's fashion retailer by trade, and Jim works in road construction and asphalt paving. I didn't ask which of them had to tame the trees and rhododendrons, but I bet it was Jim. He just has those I-can-tear-down-a-tree hands. The couple often teams up on home-reno projects for fun and profit, having worked on 17 other houses.

This house, though, is all theirs. As mentioned above, the couple has no plans to move, and Oakley seems really comfy in that obtusely-angled corner by the fireplace. That spot is warm in summer and cool in winter, I'm told. 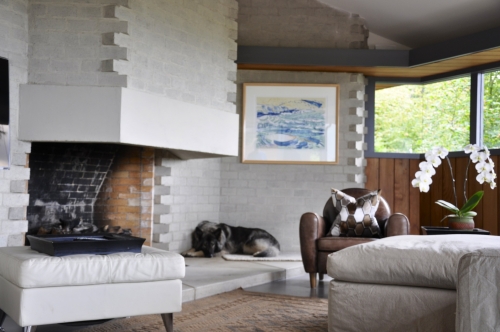 Says Jan, "We wanted to bring [the house] into the new millenium, basically, but didn't want to take anything away from the original plan."

The second bedroom and office look out onto a water feature in the front yard, installed to mask the noise of the nearby freeway. 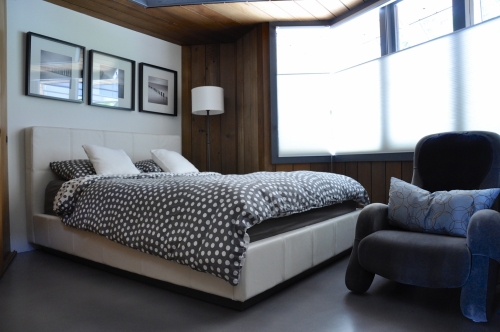 The office has a built-in desk, which also rocks the honeycomb motif. As for the desk drawers, yes, you guessed it: your junk drawer is not this cool. That's okay, neither is mine. 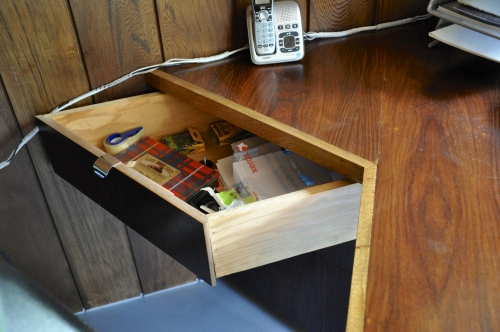 The bathrooms have been gut-renovated, their floors laid with... waitforit... hexagonal tiles. The rain showerheads, though, are square. Hah! Busted. 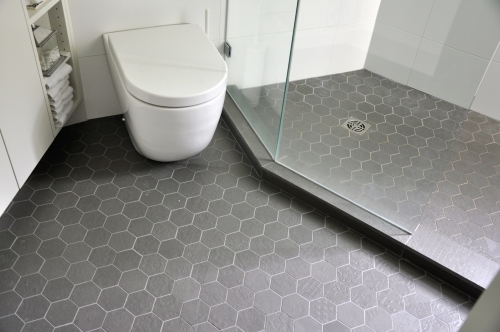 It belongs in a museum!
- Indiana Jones

After thanking Jan, Jim, and Oakley for their time, I swing by the museum to see that front door. 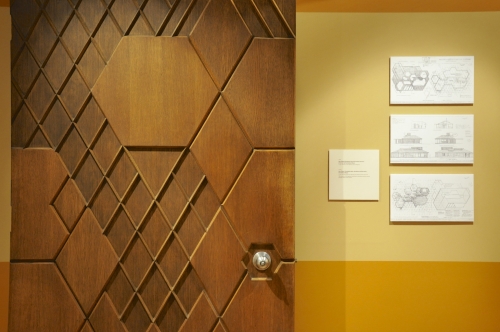 As I scope an early version of the West Coast Modern home Tour brochure, two other houses stand out in this year's architecture crawl: the Dowling Residence, because it was built in 2012 and is thus a departure from the Tour's traditional focus on mid-century architecture; and the Grinnell Residence (another Thom), because its open house is hosted by two cats.

Kiriko Watanabe, Assistant Curator at the museum and one of the West Coast Modern Home Tour's organizers, tells me that 17 different Vancouver-area restaurants, as well as 50 architecture-mad volunteers, contribute to the event.

Did you want to take the West Coast Modern Home Tour on July 13? Sorry, you can't! It's sold out! The next best thing, though, would be to check out the Ron Thom and the Allied Arts exhibition at the West Vancouver Museum. catch it before it heads to Toronto in September.

See? The city isn't all glass towers, cookie-cutter apartments, and soulless McMansions. Even if they're not within reach, sometimes it's just nice to know that houses like the Carmichael Residence are out there.