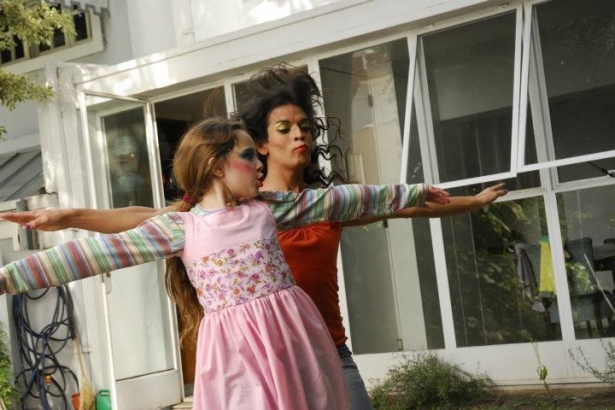 Mia had been screened twice a week earlier at the Vancouver Queer Film Festival, and also was the recipient of the People’s Choice Award and the Best Unpublished Script Award at the Habana International New Film Festival.

The film is the story of Ale, a transsexual woman who lives by a river in the Villa Rosa area of Buenos Aires, a place of refuge for LGBT people - transgendered men and women who are on the verge of eviction.

By day, Ale collects cardboard for recycling and also sews to make a living. By night, she hits the streets with her friends from the village to sell their sexual services.

While hunting for cardboard for recycling in a upscale neighbourhood, Ale finds the intimate journal of a deceased young woman, Mia.

Through reading the journal, Ale discovers that Mia has left behind a grieving husband, Manuel (internationally acclaimed Argentine actor, Rodrigo de la Serna) and a pre-teen, rebelllious daughter Julia (Maité Lanata), who is in much need of a mother figure.

Their worlds of these fascinating characters eventually intertwine as the film progresses, and explores the issues of identity, acceptance, social exclusion, life goals and ultimately the pursuit of happiness and love.

Director, screenwriter and actor, Van de Couter explained that initially he was working on a script that was becoming unsatisfying, it was "too technical" and constricted.

“It became too calculated. Then I wanted [to do] something that would have life and I put [a sign] above my computer that said 'NO RULES.'

“And then I remembered that I had known this place [Villa Rosa] and I thought [it was] magnetic, and all of it started from there, right?,” he said.

Villa Rosa was founded in 1995, in the outskirts of Buenos Aires and was mostly inhabited by transsexual women and transvestites. The Villa was a reaction to the controversial, homophobic statements on Argentine national TV by archbishop Antonio Quarracino, who suggested all gay and lesbians should live in a ghetto because “in that way a stain would be cleaned up from the face of society."

“I lived many years next door to a boarding house where trans girls were living illegally there and I saw girls that had come from the north [of Argentina] -- as when someone arrives in the city with a goal -- and for many of them, the goal was to become a woman.  So to see that transformation, how they started rebuilding their identities, because they feel in a very particular way, so it was something that touched me, and [finally] I could understand how it was,” explained Van de Couter.

The director found the inspiration for multidimensional character of Ale and for the "melodramatic" elements contained in the film from soap operas he used to watch as a youngster, in his natal Carmen de Patagones (south of Argentina) which compelled him become an actor and screenwriter and after, a director.

“The truth is that I come from a TV culture, and as a child I would fall in love with those [soap opera] heroines.[...] I always had the desire to do stories about a heroine that aims for something, that has an objective and wants to get there, and I thought it was interesting -- albeit risky to tell the film from the emotion.”

Thus, Ale becomes the bridge between those words, a although she doesn’t belong in Julia’s world, she knows that there is more than the life she has at at the shantytown.

Van de Couter cast 100 trans women–many of them from the Villa Rosa including the leader Antigua- and found Camila Sosa Villada after a recommendation he travelled to Cordoba to see  Sosa’s one-woman show, Carnes Tolendas , based on her life with text of Spaniard writer Federico Garcia-Lorca. He was immediately impressed by her acting.

“It was love at first sight.”

The film played in Buenos Aires for four months last year and was widely accepted and approved by the LGBT community which eased the early jitters he experienced before the premiere in Neuquen.

The director was awarded by the Buenos Aires City Legislature for the promotion of Human Rights with his film.

“I had proposed myself to make a film from the love. I mean, I knew that I could make mistakes, but that the intention was good. So that was my protection," Van de Couter explained.

These days things have changed in Argentina. Over two years ago, gay  marriage was approved, and in 2011, the law of Identity of Gender was also approved, which allows trans men and women to obtain their IDs with female or male names they choose.

Although there is still a lot more to do for transgendered people’s rights, Van de Couter considers this as an important step and now he knows they are now “legally protected”.

As far for the legacy of his film and the message about tolerance, equality and respect, the director, says that he would like the topic to be something outdated, a societal problem from the past.

“Even though I don’t want my film to be outdated, I want it to become a beautiful memory. […]I’d like to stop talking about tolerance, and that my film is seen as just that: as a film, and everyone just stop fighting [...] that nobody is more or less than anyone else," said Van de Couter.