Vuong-Riddick Explores History in her New Book, The Evergreen Country: A Memoir of Vietnam 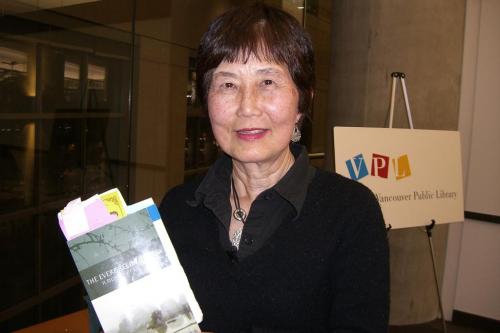 Author Thuong Vuong-Riddick speaks to the public about her memoirs of Sino-Vietnam.

Vancouver's Thuong Vuong-Riddick was born in Hanoi, but educated in Montreal and France with a BA in Philosophy and Literature. She is the author of the book, "The Evergreen Country: A Memoir of Vietnam." The book is filled with personal accounts from her life and “was difficult to write only because it is talking about myself and my family," she said. "It is hard for Asians to write about themselves, so it is good that it is in English.”

According to myths, the Vietnamese are considered the children of the dragon Lạc Long Quân, their first true king.

In the book, she states that  “when the Vietnamese have accomplished something exceptional, they proudly remember that they were the descendants of the dragon and immortality.”

It took 14 years to write the memoir. Thuong’s rich background in Sino-Vietnamese history helped her through the research and in overcoming the various socio-cultural hurdles along the way that she met as she pieced and mapped her history.

Thuong begins by speaking on behalf of the boat people. In 1979, during the Sino-Vietnamese War with the People’s Republic of China, ethnic Chinese in Vietnam felt the pinch of policies directly targeted at them. The “boat people” had escaped Vietnam, knowing that their chances of survival anywhere else was their route to family continuity.

In an interview with VO, she speaks about the importance of allowing history to be properly documented:

VO: In Indonesia, as was also seen in Vietnam, Chinese schools existed, but then were later eliminated. What are your thoughts on this?

TVR: I first started out in a Chinese school, but then I was pulled to studying at a French school because of the war. My parents thought that it was safer to be in a boarding school. And the only boarding school that they could find was a Catholic school with nuns. It was very difficult for me because I spent a whole day just learning my name [in French.] At the break, when the children were playing, the only name that I was trying to learn was my own.

VO: What inspired you to write this memoir?

TVR: At the beginning, because of the different story that my mother kept. She talked about what had happened to her during WWII, and this made me really want to connect all the history and backgrounds, to verify that what she had told me corresponded correctly to the crucial moments in history.

VO: I sense that perhaps what parents say about history and what parents have actually experienced are divergent spheres, but all part of one whole. How do you view the actions of some parents and “historical truths” they convey to their children?

TVR: Parents were very much traumatized and they don’t want to tell their children. I write this to let people remember. It took 14 years to write. I had always wanted to write it not only for my family [I have 3 children], but for the younger generation, because their parents don’t tell them much about their own history.

VO: What was the hardest aspect of starting a new life in the South of France?

TVR: It was hard for me to find a job in Montpellier. I noticed that even the shopkeeper had 2 doctorate degrees. So many degrees! My mother came to visit me along with my siblings and dropped them off with me, as she returned on her own back to Vietnam. I was thinking that even if my sister and brother were to stay with me, they wouldn’t have a bright future and the French police told me to take the children over the border. I told them that I could not, because there was a war in Vietnam. When I spoke of Canada, all my siblings were excited about it, and so I emigrated to Canada and two years later I met a man and we got married.

VO: We should attribute this success to dragon Lạc Long Quân then?

TVR: [laughs] My mother says that I’m a bookworm and wouldn’t notice any man until the age of 30, and it has something to do with books. But, we were married in Montreal. He was very willing to help my situation after knowing about it and over the next few years, we sponsored my brothers and sister, my mother and the nanny as immigrants.

VO: Has Hanoi changed much since leaving it behind for 40 years before returning again in 1995 and 2007?

TVR: After 40 years away, I found that the living conditions had not changed much. But during the first visit to Hanoi I woke up in the morning to the sound of merchants shouting, “Hot bread, hot bread.” This punctured my childhood fear. I later learned that during revolutionary times, these merchants transported documents and money as they strolled around circulating information for the Resistance.

VO: Thank you for your candid responses today.