After settling on Houdini to guide his story, Galloway created his narrator, Martin Strauss.  He is an unreliable narrator, an older man who has just been diagnosed with tinnitus, “a degenerative psychological condition” that replaces real with false memories, or so says Strauss at the beginning of the book. In fact, tinnitus is defined as a condition that causes ringing in the ear. From the outset the reader is presented with a narrator who can’t be trusted to judge truth from fiction. But then this is fiction, and as Galloway says, it is the meaning of the story, not the facts confabulated, that matter.  Though Strauss’ memory is jumbled, he nonetheless understands some deep truths…and he knows a thing or two about magicians and magic tricks.

“The magician,” writes Strauss, “trades in this human struggle.  Magic that is not real magic affects us because it mirrors our existence.  We know that what we see isn’t as it seems, but we want it to be and want to understand.  We strive for immortality in the face of its impossibility.”

Galloway grounds the book in intricately detailed descriptions of magic tricks, in which he clearly delights. The Confabulist begins with Houdini’s performance in Kansas at an opera house.  The tale then follows two narratives — Strauss in first person, and a third person description of Houdini — and bounces from one year to another between 1847 and 1927. Strauss tells his story from the present day, which isn’t today but is nonetheless located in a time when the past is reminiscence.

Galloway provides provocative details of key events and performances in Houdini’s life, whether fabricated or not, and draws the profile of a man who is ambitious, brilliant and self-involved. We follow his rise to fame in the United States and Europe, his debates with Arthur Conan Doyle about spiritualism, and his (possible) involvement in an international political conspiracy as a spy. Houdini’s story becomes increasingly complex and obscure as the book continues. Strauss, who relates parts of the story, believes he murdered Houdini, not once but twice, and recounts how his encounters with Houdini determined the course of his life.

There is ongoing irony throughout the book. Galloway strips magic tricks of their magic by revealing the mechanisms of the tricks, creating reality where there was doubt. He presents a narrator who questions, like Houdini, all that is in the realm of the "spiritualists"— and yet is in constant contact with his dead mother.

It is these contradictions or juxtapositions of ideas that most deeply engage the reader.  As the storyline skips along at a fast clip, the ideas demand considered thought.

The final element of Galloway’s novel-making process is creating structure. “The structure of a novel, the overall shape and how it’s built in terms of what parts go where, is for me a more important storytelling decision than characters or plot.” Each of his novels has an internal logic, unique and specific to its story. The Cellist of Sarajevo is structured as a trio sonata; Ascension as a gypsy folktale; and The Confabulist as a magic trick.  A magic trick, in order to be successful, explains Strauss, has four parts— effect, method, misdirection and reconstruction.

Whether the reader is consciously aware of Galloway’s structure is irrelevant. The effects are felt. Galloway uses sleight of hand, like any good magician.

“The magician,” writes Strauss, “knows that what happened and what we will remember having happened can be two entirely different things… When we close our eyes, we will see things as we believe they happened, not as they actually did. This is essential for the effect. It is what carries it forward, what propels us to seek the next effect, to keep our mortality in abeyance.”

It also propels us to read on, and to anxiously await Galloway’s next book. 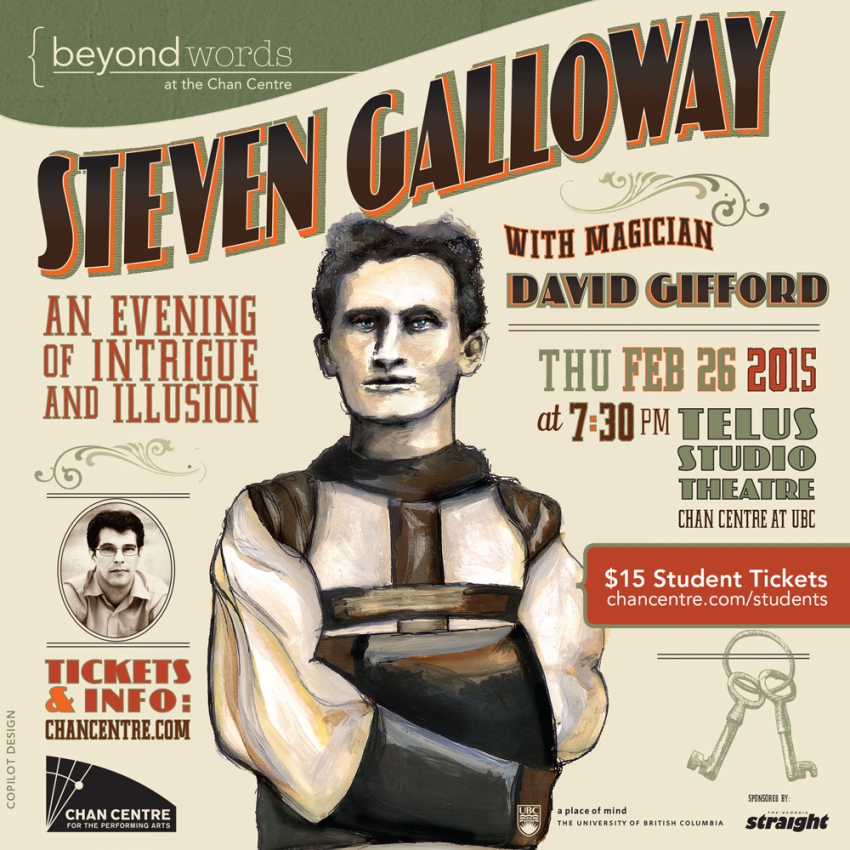 Galloway will join with magician David Gifford to present an evening exploring reality and illusion as part of the “Beyond Words” series at the Chan Center on February 26th.  It promises magic!