The spirit behind these articles on getting published is to encourage you with your book by taking you through my ups and downs as a first time author. My climate change book, "The Big Swim," will be published by New Society Publishers in February, 2015. Over the summer, we finalized the title and cover. Meanwhile, I planned a new "big swim" to raise funds for a local climate adaptation project. 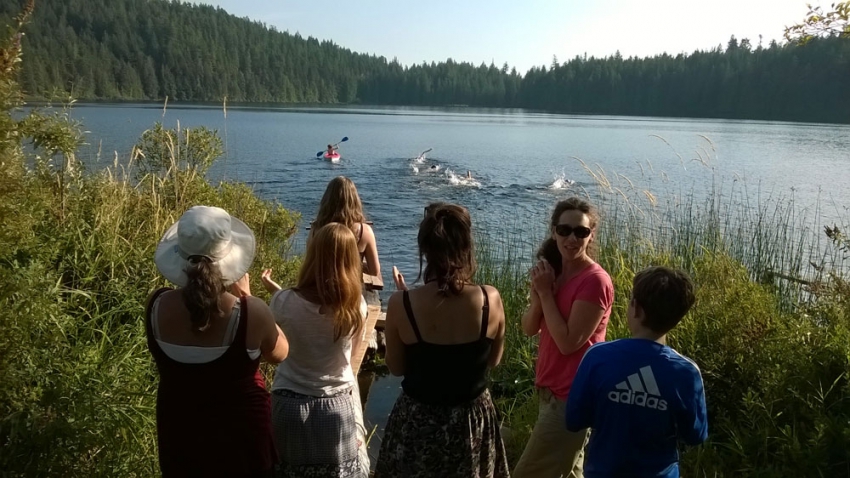 Swimming and climate change meet again: This summer we finalized a cover and title for my climate book The Big Swim and I swam nine lakes to raise funds for a local climate adaptation project.

Over the summer I had to finalize a title and cover for The Big Swim, my climate book which will come out in February, 2015. To me, these decisions must capture the essence of the book and distill it into something true. To the publisher, the cover and title provide the information on which potential book buyers will make their snap decisions about whether to pick the book up and take a closer look.

The book has had several titles. Four years ago, I called the working manuscript The Necessity of Adventure. This title captured the idea that adventures are gates which provide the opportunity to step out of our usual lives and see ourselves and the world more clearly. But the title didn’t capture the ecological inspiration of the book. Yaana Dancer, a poet and novelist in my writing group, came up with Adventures in a World at Risk, which captured the climate change aspect.

Shaena Lambert, who gave my book a bracing substantive edit at a crucial stage, suggested The Big Swim instead. It’s the title of the first chapter about an open-ocean swim as well as the narrative’s overarching metaphor –immersing in the gorgeous complexity of the world and letting it inspire us to act on climate change. I liked it: simple and evocative. So did New Society, my publisher.

But they thought it needed a subtitle to give potential readers more of a clue. I suggested Adventures in a World at Risk. They countered with Coming Ashore in a World Adrift. This didn’t seem as compelling or clear to me: I find adventures are more intriguing than coming ashore and “coming ashore” combined with “a world adrift” seemed a bit flotsam and jetsam.

So I sat down with a glass of scotch and brainstormed thirty new subtitles. My husband Barry helped me select the top five and I sent an email to twenty friends with a request that they rank them. Then I compiled their responses into a spreadsheet. Fourteen people of the twenty found only two worthy of ranking: Adventures in a World at Risk and Coming Ashore in a World Adrift. So much for brainstorm sessions fueled by scotch. The outcome was:

But Shaena Lambert favored Coming Ashore in a World Adrift.

Still, I felt emboldened to explain my hesitations about Coming Ashore to Ingrid at New Society:

To me, the book is more about engaging in the questions than finding solutions, more about the adventure than about coming to shore. Also, regarding whether the world is at risk or adrift, "at risk" pertains to the whole biosphere while "adrift" pertains to human society. For me, it's a book with the biosphere at heart.

Then I attached my survey spreadsheet to the email. And wondered if the people at New Society had understood that the quirky, slightly obsessive protagonist of the book was who they’d have to deal with through all these decisions.

I didn’t hear back. A few days later I sent Ingrid a late vote from another friend which brought the Adventures vote up to 18.

“So, what’s your favourite?” Ingrid wrote back.

“My favorite is The Big Swim, Adventures in a World at Risk because it is truest to the spirit of the book and it would interest me the most as an adventurer. But I have huge respect for Shaena Lambert's sensibility. And from the marketing perspective, I understand that environmental titles aren't supposed to be too scary, and ‘adventure’ combined with ‘at risk’ may deter the timid.”

“At this point, I'm kind of glad that it is you deciding. I support whatever you think will sell the most books.”

Ingrid responded, “Among marketing folks, there was a very strong aversion to using ‘risk’ at all in the title, and others felt that ashore/adrift carried the metaphor far more strongly…”

And so the stealthier, gentler title won the day.