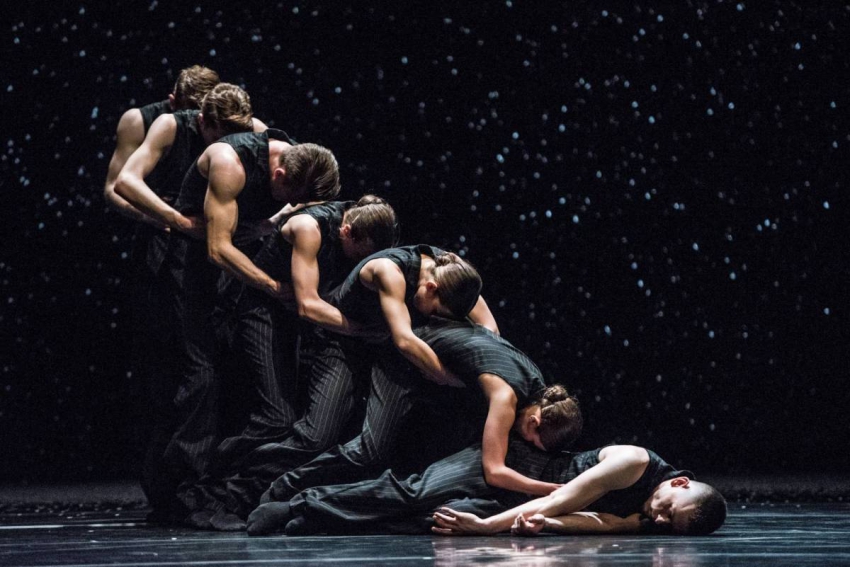 Midway through her 10th season at the helm of Ballet BC, artistic director Emily Molnar has assembled a Program 2 that revisits a pair of favourites from the company’s recent repertoire: Finnish choreographer Jorma Elo’s 1st Flash and Ballet BC alumna Crystal Pite’s Solo Echo.

Both are intimate renderings of classical scores. Elo explores a Sibelius violin concerto with half a dozen dancers, while Pite deploys seven Ballet BC headliners to render a pair of Brahms cello sonatas.

It’s an all-hands-on-deck production featuring 16 dancers, including all five of the company’s 2018/19 “emerging artists.” They contort and emote frenetically in constantly shifting grid formations against a floor-to-ceiling backdrop (by James Proudfoot) of scintillating blue pinpoint lights. Hypnotic, like watching mitosis in a champagne flute.

Don’t look here for nuanced, leisurely unfolding solos, duets or trios. Subsets of dancers do occur, fleetingly, but only to disband just as fast, morphing into some new juxtaposition before one can quite scan the geometry or the mood of any given grouping. It’s all about the matrix, the moiré.

Salant leads the piece with a sly spoof of this kind of matrix dance, set to the soundtrack of the 1985 film A Chorus Line’s opening scene, in which a barking dance captain puts a set of wannabe choristers through a set of hackneyed paces to a grueling techno score. The pressure ratchets up to a breaking point, whereupon sound designer Moritz Bard abruptly cuts over to a pulsing cross-weave of blended white noise hums.

Unmoored from their backbeat, half the dancers dissolve into galvanic twitches, the rest into slo-mo, poleaxed grovels. They pair up for mini-byplays – fights? flirtations? pranks? condolences? – the simultaneous face-offs are too numerous, varied and fleeting to catch or name on the fly.

The 8 x 2 or 4 x 4 matrices presently split into two warring tribes that preen and taunt each other like Montagues and Capulets. But then the subsets interpenetrate again for a final febrile paroxysm before the spotlights fade, leaving the dancers silhouetted in mid-twitch against the pointalistically glowing backdrop.

The two more classical repertory pieces that frame WHICH/ONE serve to highlight the boldness of Salant’s innovations and the professionalism and depth of talent that make Ballet BC eligible to host such a world premiere. Strung across the brightly lit, unadorned stage of 1st Flash, the six grey-clad dancers flint like a string of lustrous pearls. Their vaulting arabesques matched the virtuosity of Sibelius’ violin line, although the gestures struck me as unnervingly angular for some of the more florid passages.

No such mismatch in Pite’s setting of the Brahms sonatas. Inspired by poet Mark Strand’s Lines for Winter, she sets her scene in a snowscape, eloquently rendered by Pite’s longtime collaborator, lighting designer Tom Visser.

As the scene opens, he beams the full blaze of his spots upon flurry of falling flakes from the fly loft in the top half of the stage, leaving the stage floor in semi-shadow. There (in Strand’s words), “inside the dome of dark/…under the crackling white,” the dancers, one by one or in pairs, stoically “go on/ walking, hearing/ the same tune…,” to wit, the chill strains of the E minor sonata, allegro non troppo.

But then, as the key shifts to F major and the tempo to adagio affetuoso, the spots back off to catch the full swirl of stage snow. The dancers come converge in bigger and tighter groups, like snow smoothing the landscape into hummocks and drifts.

And “tonight” (Strand’s voice, again) “as it gets cold/ [you] tell yourself /what you know which is nothing /but the tune your bones play /as you keep going.” And with that curiously consoling thought, “you will be able /for once to lie down under the small fire /of winter stars.” On which note, Pite sends us back out into the tail end of Vancouver’s tryst with the Polar Vortex.