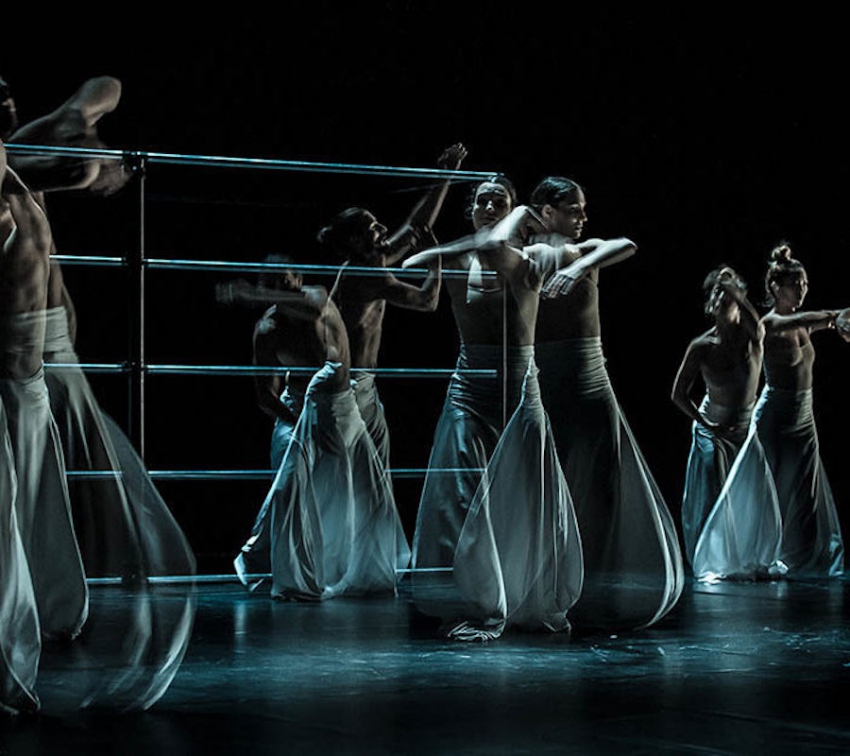 In case you hadn’t noticed, the erstwhile Queen Elizabeth Plaza at Dunsmuir and Hamilton has now been rechristened šxʷƛ̓exən Xwtl’a7shn, which in indigenous Coast Salish dialect means “place of celebration.”

Sounds a lot less dowdy, doesn’t it? And, accordingly, it feels like the programming has taken on a new lightness at the Plaza’s iconic performance spaces, the QE Theatre and Vancouver Playhouse.

So much so that, in a trio of bravura productions at the two venues this autumn to launch the current dance season, even the laws of gravity seemed suspended. Literally suspended – from bungee cords and pulleys – in Dance House’s maiden 2018-2019 offering, Borderline, by the hip-hop inflected French Company Wang-Ramirez.

The troupe’s bboys and ggirls (co-founders Honji Wang and Sébastien Ramirez, along with Johanna Faye, Saïdo Lehlouh and Louis Becker) could be flying, leaning into headwinds, swimming against undertows or falling upwards, depending on how rigging designers Jason Oettlé and Kai Gaedtke chose to lay out their cordage for any given scene.

The effect was pure magic, but with no hidden gimmicks. Rigger Alister Mazzotti was explicitly visible onstage almost throughout, a black-clad dancer in his own right, pulling all the strings and ringing his five co-stars from the Playhouse rafters like a kinaesthetic carillon.

To reinforce the campanile impression, costumier Anna Rodriguez suits up the dancers in bell-like tubes of white elastane for Borderline’s finale. In previous scenes, she dressed them in everything from tottering high heels and mini-hoopskirts to traditional Korean jeogori and ch’ima. But they mostly just wore slacks and sneakers, as befit hip-hop’s street roots.

The musical score, though, by percussionist Lacrymoboy (aka Jean-Philippe Barrios), was a far cry from standard boom box rap. Through the miracle of sampling and timbre/speed controllers, Barrios wrung out of his drumset a whole (pre-recorded) panoply of tones and styles, from guitar riffs to throat-singing, from chimes to howling reverb, spoken narrative or whooshing pulses of blood and breath.

The staging, too, had none of hip-hop’s spray paint aesthetic. Rather, the dancers treaded air over, under, around and through a hexi-flexi openwork stainless steel cube. Set designer Paul Bauer has hinged this frame such that it could teeter on edge, fold out into a sort of colonnade or encase a human figure to square the Vitruvian circle. And, with lighting designer Cyril Mulon’s stark side illumination and subtle color shifts, the cube cast cool shadows on the levitating bboys and ggirls.

There’s more to all this than mere technical gee-whizzery. It’s meant, as the title suggests, to be a serious exploration of the evermore-vexed question of broached frontiers, both personal and geopolitical. An outside force – Mazzotti – controls who attains the cube and who falls short, who pairs with whom, who gets to fly and who remains earthbound.

The game is right and truly rigged, with explicit guy wires. The dancers have no control over where they’re going, although, in their whirligig gyroscopy, they demonstrate dazzling freedom as to how they get there. It’s b-dance of a high, formal and earnestly philosophical order.

Which is a far cry from the playfulness of very next week’s Playhouse programme, Backbone, by the aptly named Australian troupe Gravity & Other Myths. It was circus artistry of the highest order, but with none of the thematic pomposity of, say, Cirque de Soleil.

Rather, it felt a bit like a beach picnic, with fantastically cantilevered human pyramids, three-tiered games of ‘chicken,’ cartwheels, back-flips, high-dives into mosh pits of ready “catchers” and lots of jokey banter in unintelligible Strine. Even the costumes were ad hoc congeries snatched on the fly from an onstage clothes rack.

But don’t be misled by the easy-going vibe. Director Darcy Grant meticulously mapped out every last vertebra of Backbone. It showed in the hair-trigger timing and coordination of the stuntsmanship. And in lighting designer Geoff Cobham’s mesmerising mirrored-laser moirés. And, most impressively, in the seamless meld of the music to the intricate perpetual motion machine of the multi-ring circus.

Composers Shenton Gregory and Elliot Zoerner were right there onstage with the 18-member cast throughout. They looked to be performing on a standard violin and drumkit, respectively. But what textures they somehow wrung out of those instruments:

Squeals and roars. Klezmer wails and tremolos. Gongs and chimes, double-bass growls, marimbas and tambourines, calliopes and church organs, rain-spatter, piano trills and shakohachi sighs. For sheer derring-do, the musicians kept right up with the acrobats – testimonial to their skill, inventiveness and sheer stamina, but also to the force-multiplier of today’s state-of-the-art synthesizer technology.

Not that there’s anything passé about Gen Y synthesizer technology, either, as demonstrated right next door in the QE Theatre with the Canadian premiere of pioneering choreographer William Forsythe’s 1989 milestone Enemy in the Figure. The “post-structuralist” masterwork led Ballet B.C.’s season-launching Program 1.