Butoh on the brink of The Singularity 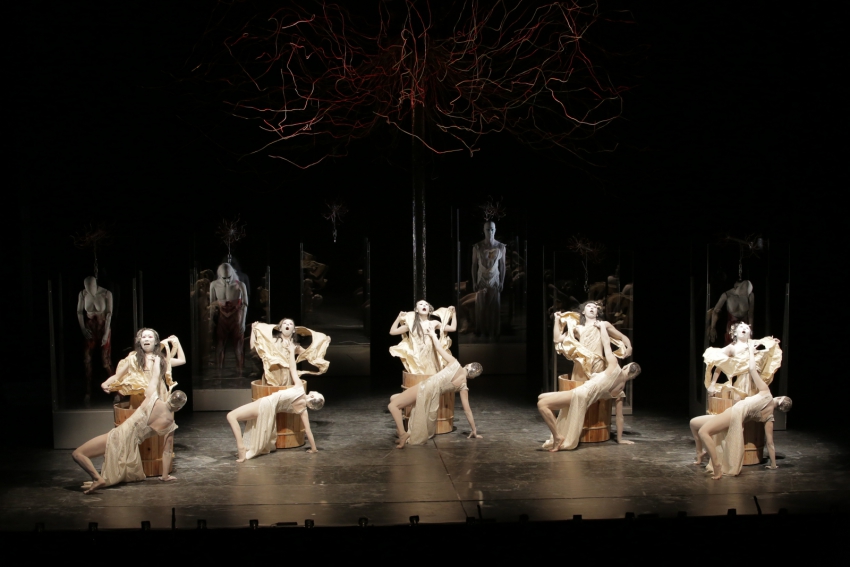 On its third visit here, founding butoh master Akaji Maro’s Dairakudan (“Big Camel Ship) dance troupe already has enough of a following that the Vancouver International Dance Festival (VIDF) is hawking memorabilia in the Playhouse lobby as the audience files in.

Hottest selling item is a gorgeous poster emblazoned (in kanji ideograms) with the title of tonight’s performance: 擬人超人 – common terms of art, as it turns out, in the Sci-Fi subgenre of Japanese manga comic books.

In English, according to the VIDF programme, the phrase translates as “Pseudo human/Super human.” But that misses a crucial nuance of the first two characters, which carry a connotation of “wannabe” human.

And it’s that undertone of aspirational one-upmanship that seems to drive much of the horror and drollery of Maro’s dystopian three-way tryst between techno-lords, their cyborg creations (or usurpers) and the great, redundantly recyclable “wetware” residue of the rest of us.

Under the kanji the posters feature a montage of bodies, nearly naked and blanched white, as per butoh convention, crowded as densely as a termite hill. So, filing into the hall,  it comes as a surprise when the houselights dim and the scene opens on no humanoid figures at all, but rather KUMA-Katsuyuki Sinohara’s static, inanimate (?) three-storey floor-to-ceiling sculpture.

It’s a light-transmitting glass column that frays at the top into a tangle of twisted tentacles like a plasma discharge orb. Arrayed upstage, an arc of upended glass coffins casts glinting reflections throughout the auditorium.

When the spots finally do pick out a row of dancers, they seem as silicon-based as the glassy stage set itself: seated ‘droids that twitch and jerk, systematically testing out the flexion of each joint and facial tic. These, we will learn, are the earliest Beta prototypes of a robotic ecosystem tended by a platoon of fawning lab-coated techies on the payroll of a top-hatted Mister Monopoly capitalist.

With growls and barks and mudras, a more-or-less Shinto priest sanctifies this world-order so that the Moneybags can complacently imagine he’s still in control. The mogul is soon disabused, though. Over the course of the next 16 scenes, the fast-evolving cyborgs repeatedly glitch and even mutiny, all to the tune of a variegated, pulsing, resonant techno score by “Wizard” DJ Jeff Mills and shakohachi master Keisuke Doi.

As soon as they find their feet, the robots stomp the stage demandingly in a stiff golem hoedown. To feed them, a platoon of slinking ghouls have to scavenge floppy “wetware” manikin/corpses into (very fetching, Japonesey) wooden kegs. Early efforts to program the ‘bots fall prey to viral glitches.

So, as a Plan B, Mister Monopoly – shadowed by a slouching Igor-style acolyte – cobbles together a Frankenstein pastiche of a superman. The ghouls drag out the thethered monster in leg irons, but he flails his chains to entangle his captors into a staggering maypole dance.

Then Mora himself, Dairakudakan’s 76 year-old founder, puts in a cameo appearance. He gets rolled out onstage in a wooden barrel, rising from his cask in a cadaverous frizz of scraggly locks. “Igor” baits this apparition and corks the ghost back into its tub.

In its quest for wetware inputs, Robotics, Inc., sets out to farm them in the form of whelk-like little hoop creatures. These mindless, barrel-dwelling bleaters are, in turn, hybridized with the upgraded ‘bots to create a new line of multi-limbed chimeras.

Boss-chimera of them all is a kind of concertmaster robot with a gleaming pair of elongated prosthetic arms, who conducts the cyborg ensemble from a command-throne upstage. The whole tableau meshes smoothly enough at first, but then the robots revolt, yanking the arms off the conductor’s limp and bleeding corpse as the techies cower in fear.