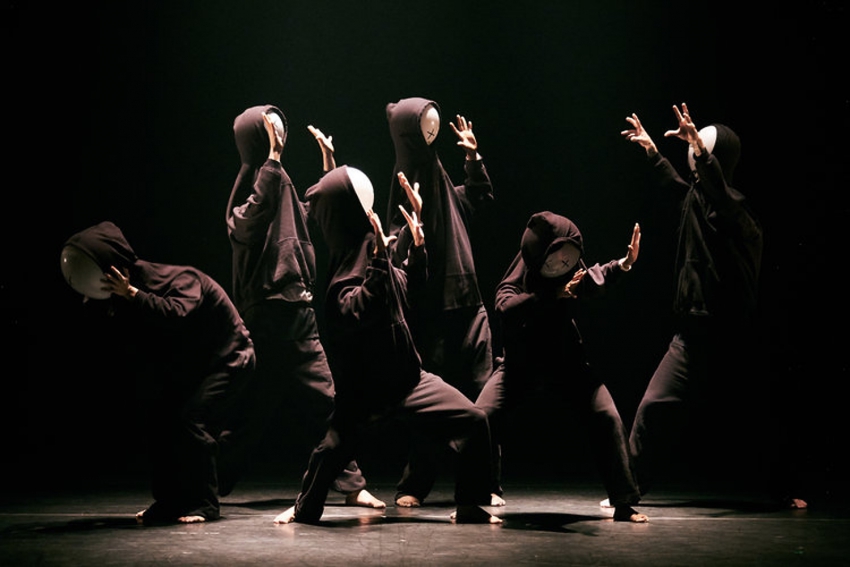 According to their website, the work had its origins in a set of breathing exercises that somehow expanded into a phantasmagoric pas de six, including, along with the core duo, fellow-dancers Victoria Mackenzie, Mecdy Jean-Pierre, Marie-Reine Kabasha and Rahime Gay-Labbé.

They stand in a ring, breathing. Just breathing – calmly, audibly, acapella. In the hushed velour bonbon box of the Cultch’s Historic Theatre, we find ourselves breathing along with them in synchrony.

Then Samuel Nadaï’s original music score subtly kicks in with some low, gravelly reverb as one or another of the individual dancers ventures a wave that sets the rest of them swirling like dust motes.

Add a percussive line and some syncopation and the “breathing” becomes less organic, more mechanistic. Dancers move in stop-action synchrony, like pneumatic pistons.

A shift in  lighting and a tidal surge in the music plunges us back into organic mode, but this time sub-aqueous. With preternatural buoyancy, a foreground trio of dancers clump together like a drifting, jellyfish or cephalopod – a Tentacle Tribe, indeed, as per the ensemble’s name—while three more in the background waft like kelp fronds.

The undersea imagery turns a edgier, almost architectural, like a multi-foliate coral reef, but still with a calming symmetry. The languid idyll doesn’t last long, though; cue up the laboured breathing sounds again and the dancers start to mime an increasingly anguished struggle for breathing tubes and oxygen masks.

Full frontal spotlights pick out a pair of dancers that lean into each other like lintels on a portal into fathomless gloom – a doorway of the drowned. Dancers issue forth from this gap and vault off into the wings, slowly at first, then faster and faster, recycling in a loop. And then the white clad horde is interspersed with first one then several figures now sheathed in black sweatpants and hoodies.

Until a hoodie pokes out and then gets abruptly pulled back into the portal. Our geyser has suddenly turned inside out into a whirlpool. We’re sucked down to some lightless, anaerobic trench of slithering, black, unnameable shapes.

Ectoplasm, it turns out, has its own tides. The dancers ebb and flow, surge and intertwine, billow up into black-clad waves surmounted by a froth of highlighted fingers. A spotlight from the ceiling swivels crazily over the writhing bodies like a lighthouse beam, strobing onto contorted clumps of twitching action before veering off again.

Just as we’re about to start fibrillating apace with the bodies onstage, the score goes silent and the sinister shapes recede to make way for a figure of uncanny drollery – a jet black, slope shouldered, 8-foot tall shmoo-like silhouette with only a blank, white balloon for a face under his black hoodie.

He paces the stage with florid gesticulations as he delivers a kind of spectral TED-talk on what to do if you meet a ghost (FYI: don’t shriek or shrink or back away; rather walk right into and straight on through the spook). The rest of the troupe regroups onstage in like attire as a ghostly TED-crowd, thoughtfully tapping their brows or stroking their chins (neither of which they’ve got on their blank balloon faces) and occasionally rearing back in a finger-fluttering frisson of fright.

Then, one-by-one, they pop they peel back their hoods, allowing the helium-filled orbs to levitate on strings above their heads, like manga thought-balloons. A dancer wriggles out of her black sheath and gathers up all the strings to assemble a balloon-bouquet, evoking the innocence of a toddler birthday party.

The remaining black-clad bodies re-entwine and resume their flux, buoying the balloon girl up to surf the ectoplasmic eddies. More and more dancers slip their sheaths and bob to the surface of the spectral wave until at last they’re all deposited, upright on their feet again and all in white, gleaming in a steady frontal spotlight – breathing, just calmly, steadily breathing, audibly acapella again.

Which is when I first notice that I’ve been holding my own breath for the past few heartbeats already. Others in the audience seem to have come to the same realization, judging from the momentary pause before the standing ovation.