Program 3 brings Ballet BC season to a rousing conclusion 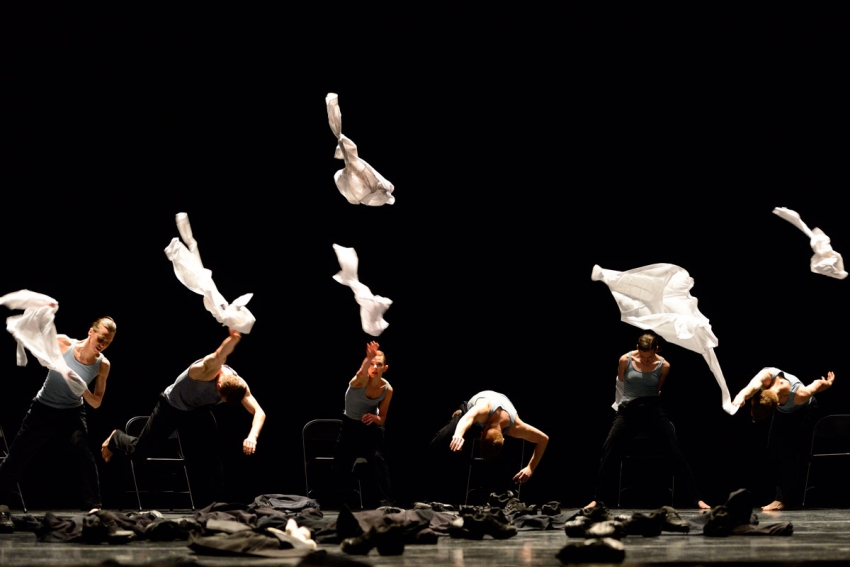 With its top tier standard of expressive athleticism and its A-list repertoire of global choreographers, Ballet BC has become such a cultural landmark that it tours the world’s most prestigious dance venues and now rates its own civic holiday.

Vancouver’s first official “Ballet BC Day” coincided with the final performance of the ensemble’s Program 3, which also concluded the company’s 2018-19 season and artistic director Emily Molnar’s 10th year at its creative helm.

As in past years – and, again, in the upcoming 2019-2020 season – the latest Ballet BC program had a marked Israeli tinge. It led with the North American premiere of Bedroom Folk, a 2015 creation of the choreographic duo Sharon Eyal ande Gai Behar, co-founders of Tel Aviv’s L-E-V.

And the evening concluded with a reprise of Minus 16 by  star choreographer Ohad Naharin. The eclectic work is, a potpourri “highlights reel” from Naharin’s long innings heading of Israel’s Batsheva Dance (Eyal is one of his alumnae), remains as crowd-pleasing now as it was in 2017, the last time it appeared on the Queen Elizabeth stage here.

Sandwiched between the two Israeli works was the world-premiere of a new work, Poesia, by Serge Bennathan, artistic mage of Vancouver’s own Productions Figlio. To prepare for this Ballet BC commission, the French-born polymath (he writes and paints, as well as choreographs) reportedly penned “poems and pages about being present, about pain, love and transfiguration,” and “painted whimsical possibilities, trust, desires.”

In mid-performance, some of the dancers are called upon to recite Bennathan’s lines onstage. Much the text, however, gets lost in the delivery or swallowed up in the violin, cello, keyboard and electronica score by Bennahan’s longtime collaborator, composer/performer Bertrand Chénier.

The staging, too, is strikingly stark. Unlike the curvaceous, primary-couloured fantasy garb of Bennathan’s watercolours, costume designer Kate Burrows tricks out the dancers in what looks like casually mix-matched gym-ware in off hues. And lighting designer James Proudfoot works with an array of side-spots and overhead lights all explicitly visible on the bare stage. Coupled with the choppy, episodic segmentation of the work, the net effect was more of an edgy etude, rather than a finished work, despite the practiced panache of the ensemble.

The contrast was all the more pointed coming on the heels of the high-gloss polish of Bedroom Folk. To a driving techno-score by L-E-V’s own composer (or, as he styles himself, house DJ) Ori Lichtik, Eyal put the dancers through a set of tightly coordinated paces. Sometimes she programmed them with the tic-toc precision of automata, sometimes with the swirl and flow of sea anemones. They moved in tight-knit groupings, their cohesion highlighted by designer Rebecca Hytting’s uniformly constrasty black-leotard-white-shoe costumes.

Lighting director Alon Cohen would pick out these clusters, whether glaringly front-lit or in back-lit silhouette, against a flat, scrolling backdrop horizontally striped in broad, stage-height, bands of sunset orange or midnight blue. And then Eylar would peel off a dancer or two into the foreground to execute exuberant free-form shines against the ensemble’s moiré of flailing limbs. The propulsive energy left the audience a bit wrung out by the time of the first intermission.