@giselle: through a phone, darkly

“And your personality shines through even in motion-capture,” Beamish assures her as they practice their paces. “Whether as a cloud or a whirlwind, the projections come across as unmistakably you.” It’s a joy to watch their wordless communication as they minutely tweak their choreographic phrasing. With her quirky charisma, she humanizes the seeming physical impossibility of her technical perfection.

Ballet – like all too many classical art forms – seems to draw a disproportionate share of its audience from my own grizzled demographic. That may be partly due to ticket prices tailored to mature bank accounts. But no such qualms should deter young viewers from @giselle, with perfectly good spots in the 600-seat Playhouse going for as little as $35.

And @giselle seems ideally confected for Gen’s X, Y and Z balletomanes, too. Not just for its techno gee-whizzery, nor yet for its thematic topicality. Even trendier is its gently ironic take on the Romantically earnest story line and its sly cooptation of  classical ballet's gestural vocabulary.

Hurlin dances en pointe, comme il faut, but with a sassiness that might owe more to Beyoncé than to Olga Spessivtseva. She embodies the solipsistic aesthetic of the selfie, the unremittingly online performance of a watcher ever watchful of herself being watched.

For Beamish, who founded his own JoshuaBeamish/MOVETHECOMPANY dance ensemble at age 17, @giselle is “the most classical work I’ve choreographed to date.” But Hurlin pronounces it “the most ‘out-there’ piece I’ve danced so far in toe shoes.”

“How very avant garde,” enthuses Vancouver Ballet Society (VBS) Secretary Jean Orr, 90, who, as an Ottawa teenager some 71 years ago became the first Canadian to dance the role of Giselle. 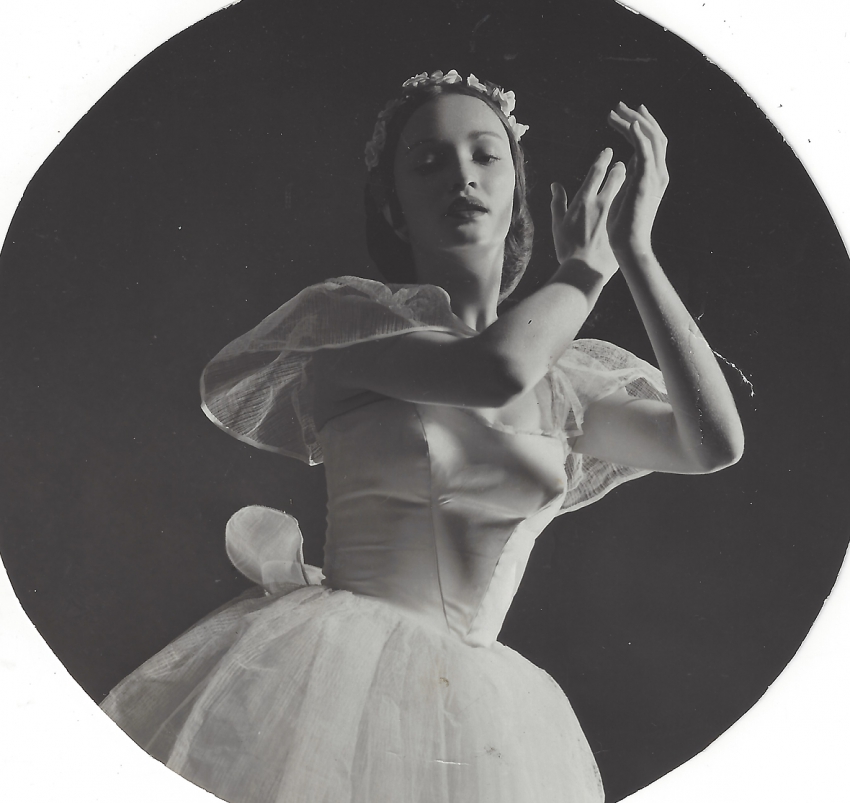 No such self-consciousness back in her day, she recalls. For all the psychological changes her character undergoes – from giddy puppy-love to suicidal disillusionment to being dead and exhumed – Orr simply took her cues from her then-mentor and ballet mistress, Nesta Toumine of the Ottawa Ballet Company.

“Even the great Margot Fonteyn, early in her career, feared she was ‘not ready’ for Giselle -- too deep for her,” Orr laughs. “But, at age 18, what did I know? My biggest preoccupation at the time was how to climb out of the stage-hatch of my ‘crypt’ without tripping over myself.”

JoshuaBeamish/MOVETHECOMPANY and the VBS will celebrate Orr’s “iconic legacy and immense contributions to the art form of dance” with a gala post-show reception after the premiere. Orr went on to a lustrous – but brief – career as a Winnipeg Ballet soloist, but retired from the stage at age 25 to marry and raise six children.

As a teacher and arts administrator, she’s mentored generations of up-and-coming dancers. Still lissome, bright-eyed and crackling with energy, she continues to conduct master classes at the ScotiaBank Dance Centre.  She’s starred in Swan Lake, Les Sylphides, The Nutcracker and countless other classic ballets, but, after 1948, never revisited Giselle onstage.

Hurlin’s Giselle, on the other hand, could remain definitive for decades, at least theoretically, now that she’s been digitized through motion capture, Beamish points out.

“What an exciting time we live in,” Orr sighs. Back in her time, Canada was viewed as an outlying and backward frontier of the ballet world, and now Vancouver balletomanes can be the first to see a definitive, world-class interpretation of canonically iconic work. Don't miss the chance.